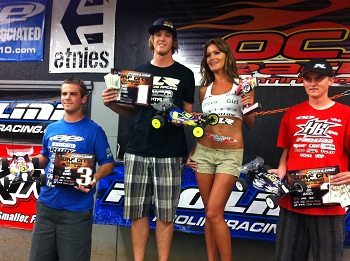 Dustin Evans would continue where he left off at the ROAR Nationals two weeks ago taking the top qualifying spot at the Surf City Classic after taking the TQ in rounds 1 & 2 in the Invitational Mod Buggy class. Evans started out strong in the 10 minute A-main and ran a flawless race, taking home the win with his Orion powered TLR 22 buggy. The TLR team put four TLR 22 buggy’s in the A-main!

In the Invitational Mod Truck class, Dustin Evans takes the first win with the new TLR 22T truck!! After three rounds of qualifying, Evans would start second on the grid for the 10 minute A-main. Dustin would show great patience in the beginning of the race which would pay off in the end. With a couple of mistakes by the leader late in the race, Evans would take over the lead and never look back. TLR would put all three of the new Orion powered TLR 22T’s in the A-main.

In Open Mod Buggy, TLR Team Driver Trever Adamo would have to bump from the B-main after some rough qualifying runs. Starting from the back in the A-main, Adamo eventually worked his way to the front to take the win on the last lap from TLR teammate Casper who ended up taking a very respectable second place.