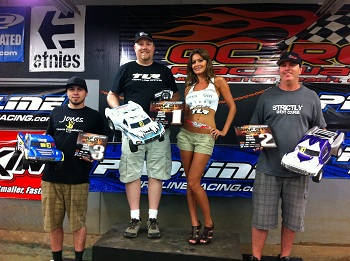 Well I had a great weekend at the Surf City. I won Pro-2 SC. Started 2nd on the grid. After a few bobbles to start the race I put enough pressure on the leader to take over thelead and never looked back. The Tekin Powered XXX-SCT was awesome.The Tekin power was too much for the field and I got the win.

In Pro-4 SC I struggled in qualifying trying to run slicks and it just made the truck too hard to drive. As a result I ended up having to start 6th on the grid. In warm up practice on main day I switched to treaded tires and truck was much easier to drive. After a few hang ups with traffic to start the race I was able to run up to 3rd spot and hang there until the leader broke and was able to then move up to second. I was running on pace with the new leader but my starting position ended up being the difference at the end and I had to settle for 2nd only about 4 second back. The new Pro-4 4600 motor really performed well and gave me all the power I could ask for but also had the control I needed to get round the tricky parts of the track.