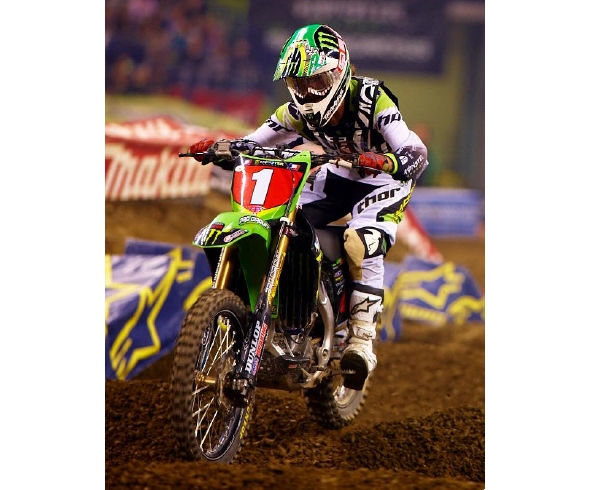 Latest race news from Traxxas:February 20, Indianapolis, IN: As the 2010 AMA Supercross series made its east-coast debut at the Lucas Oil Stadium, all eyes were on Monster Energy/Pro Circuit/Kawasaki/Traxxas rider Christophe Pourcel. Would the defending East Coast Lites champ show the same winning ways that put a red number-1 plate on the front of his Pro Circuit-prepped Kawasaki KX250F in 2009? Pourcel’s heat race answered the question in short order. After slotting into third in the tightly-packed lead group with Kyle Regal and Martin Davalos, Pourcel took just two laps get in front of Davalos for second, and in the next turn, put the swoop on Regal to take the lead. From there, Pourcel was on afterburners and put over five seconds between himself and second-place finisher Ryan Sipes on the way to the checkered flag. Pourcel’s teammate Dean Wilson made his Supercross debut with a sixth-place finish, easily making the cut for the Lites Main Event. Soft-spoken but confident in his Speed interview, Christophe Pourcel was concentrating on the moment. “Right now it’s all good, I’m really happy to win the race. It’s going to be exciting to try to win the main event. I’m just going to give my best to win.”

Justin Barcia made it to the Spike Holeshot marker first as the Lites Main roared off the line, but Pourcel was in position for a pass and overtook Barcia before the announcers could even finish calling the start. Pourcel repeated his heat-race performance in the Main as he flowed through the track and opened an ever-widening gap on the field, eventually putting an incredible 5.65 seconds between himself and second place. Pourcel rode seemingly unchallenged past the checkers to win the first race of the 250 East series, and while he made it look effortless, Pourcel acknowledged the weight of being the defending champ. “It’s never easy to get the number-one plate and win the first race,” said Pourcel after the Main. “I’m just really happy and want to say thanks to everyone who is behind me, and I hope to be on the podium again soon.” Traxxas-sponsored Dean Wilson finished in sixth, an auspicious pro start for 2009’s top amateur racer. Just 18 years old and fresh from Kawasaki’s Team Green rider development program, Dean will certainly be a rider to watch as the 250 East series heats up.