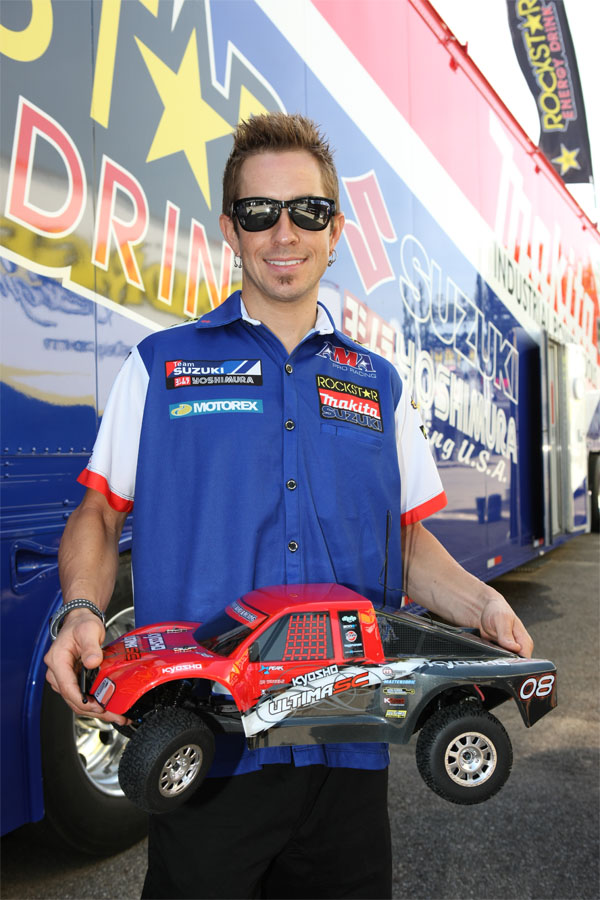 We would like to welcome Tommy Hayden to the Kyosho family. After racing his Suzuki GSX-R1000, Tommy likes to tear it up with his Kyosho Ultima SC Truck. Just like Tommy the Ultima SC was born to perform at its max each and every time with winning results.

Turning pro in 1994, Tommy is also a regular competitor within the Grand National Flat Track series during his off weekends. In his time away from the track, Tommy enjoys riding mountain bikes, motocross, supermoto, playing golf, and jet skiing.

Another Podium for Tommy at VIR

Alton, Vir. – August 16, 2010 – Rockstar Makita Suzuki’s Tommy Hayden, fresh off his victory on Saturday at VIR, made it to the podium again on Sunday with his third-place finish. Hayden battled for traction throughout the race but held it together to the finish line. Hayden is still in second place in the standings, but with two more rounds of racing to go in the AMA American SuperBike series, he’s well within striking distance of first place at 11 points back.

Hayden started on the front row of the grid and shot out to the early lead in Sunday’s race. He then moved into second where he held steady until he noticed some chatter in his bike, which is thought to have been due to the grip of the rear tire. With high humidity and thick cloud cover, the track wasn’t as hot and sticky as everyone would’ve liked, but Tommy made the most of the race by riding a smart and finishing third.

“I feel good about riding fast the first five laps, but in the end I didn’t have the speed and the rear tire couldn’t keep up,” Hayden said. “We’ll go back to work before New Jersey and find more speed.”

Round 9 of the AMA American SuperBike series takes place on September 3-5 at New Jersey Motorsports Park in Millville, New Jersey. Hayden is looking forward to earning more points toward the championship then.