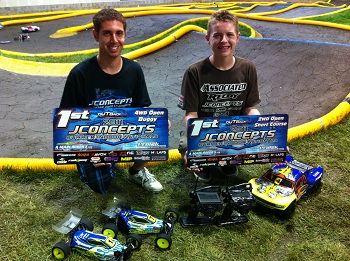 For the second year in a row, drivers made their way to Outback Raceway in Chico, California, for the Summer Indoor Nationals. An amazing facility, expanded pit area and the JConcepts Indoor Nats purpose-built new track layout were completed before the event giving additional life to the popular Northern California event. Just under 200 entries attracted serious competition coming in from all areas of the country to take a swing at the Summer Indoor Nationals title. It was decided by the track management crew to run a dry surface which meant increased traction, quick lap-times and as the weekend went along lower tread on the tires for the ultimate traction.

On Saturday, Steven Hartson started things off with amazingly quick qualifiers and put himself on top of the field in the 2wd and 4wd modified classes. Aaron Biner looked ultra quick in the 2wd Open Short Course class taking the TQ. Hartson and Biner’s vehicles were equipped with JConcepts Bar Codes in gold compound, Profiled JConcepts inserts with Punisher bodies on the buggies.

Sunday was the all important last round of qualifying and then the main events. During the qualifying / main break, drivers lined the pits for the huge prize raffle. Many drivers came away with prizes courtesy of the manufacturers and A-main Hobbies. For some participants, it was a raffle to remember with kits, personal transponders, power supplies, speed controls, chargers, JConcepts gift certificates, bodies and accessories being made available. Special thanks for the many fine sponsors making it all possible.

As the mains started to roll out, drivers began bumping into the A-mains giving them the ultimate shot at glory and the all important 10 minute A-main. The 2wd Open Short Course A-main was one of the first events to start and TQ Aaron Biner easily jumped out front with Jason Ruona 2nd and Tanner Denney 3rd. Biner continued a smooth and consistent pace while Denney moved into 2nd. The chase was on for 10 minutes and Denney was having a hard time making up room on Biner and the 2 drivers stayed very close. A small mistake by Biner gave Denney the opening that he needed and Tanner took the lead.

With 2 minutes left in the race, Denney’s extremely smart driving kept him in the lead, Biner was able to find an extra gear and closed the gap slightly. With only 30 seconds left in the race, Tanner had a nice lead but began coming up on traffic which made the race that much more difficult, however, in the end, Tanner found the best way around the traffic and cruised down the straight-away to the finish line. Tanner Denney finished in 1st, Aaron Biner finished 2nd and Tyler Vik in 3rd.

The 4wd open buggies lined the track for the fastest race of the day. Blistering off the line, TQ Steven Hartson was on rails and looked confident early into the 10-minute main. Tyler Vik was comfortably in the 2nd spot while the 3rd place was hotly contested between Tanner Denney, Ryan Lutz and Josh Numan. Denney made a mistake and Ryan Lutz had to retire with a mechanical issue putting Numan into the hunt. A few small mistakes by the leader Steven Hartson put Vik into contention and Numan made up some serious ground to get right behind the leaders.

While attempting a pass on the straight-away, Hartson grabbed a serious amount of throttle and hit the outside of the straight-away causing some breakage on his vehicle allowing Numan to bump-up into 2nd place. The race was on between leader Tyler Vik and Josh Numan and both drivers ran very clean and mistake free which opened a gap to 3rd place. With only a few laps to go, Numan made a move on the off-camber getting inside of Vik and took the lead. Josh’s B44.1 looked clean, dialed in and was now out front with a small gap on Vik. Numan, looking experienced in the last several laps maintained his edge all the way to the finishing line taking another win for JConcepts and Team Associated. Tyler Vik took 2nd and Austin Blair 3rd. Josh Numan’s B44.1 was decked out with JConcepts all weekend long with Bar Codes in gold compound, Punisher body, 6.5” wing and Profiled closed cell inserts.

The last race of the day, 2wd Open hit the grid, after several warm-up laps and the drivers were ready. Steven Hartson once again took the quick start and led the field for the majority of the first few minutes. Tyler Vik looked amazing and was all over the back of Hartson and when Hartson made a small mistake, Vik to took the lead. Hartson wasn’t letting up and quickly made-up time, and quickly returned to his spot right behind Vik and the race was on. Back and forth, the 2 top drivers switched the lead and Hartson made an amazing pass on the small double in front of the drivers stand and the drivers drag-raced to the end of the straight-away. Hartson got slightly pinched-off on the short-shoot causing him to crash which allowed Vik to take a large almost insurmountable lead. Holding the lead to the finish, Tyler Vik crossed the finish line on a well deserved win another his 3rd podium position of the weekend. TQ, Steven Hartson finished in 2nd and Josh Numan 3rd.