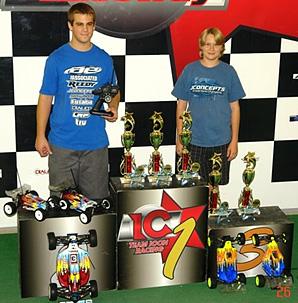 The track at the first Ko Propo Off Road Championships at West Coast Raceway is about 60′ X 120′. Its 100% clay surface ranged from a bit rough to bumpy. The race was well attended with about 125 entries. The racers were greeted with a full plate: On the menu were sixteen qualifying heats and twenty-nine Mains (triple A Mains).

Steven started out qualifying Saturday with a couple of rough runs in 2WD and 4WD, but got back on his game and out-qualified the field in all three classes. The track just kept getting faster as the day progressed through qualifying. Round 3 was the fastest round of qualifying.