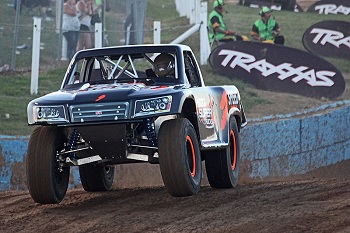 With the inaugural season of Robby Gordon OFF-ROAD’s Stadium SUPER Trucks to kick off in just four short months, series officials are pleased to announce that tickets are now on sale for the season opener at University of Phoenix Stadium in Glendale, Ariz. on April 6, as well as the April 21st event in conjunction with the IZOD Indy Car Series Toyota Grand Prix of Long Beach and the third event on April 27 at the historic Los Angeles Coliseum in Los Angeles, Calif.

“I’m so excited about Stadium SUPER Trucks, BIGFOOT® Monster Trucks, quads, and side-by-sides racing in stadiums again. It’s been a dream of mine for a long time to be able to put this package together, to take off-road racing to the next level. Trucks have been running and testing all year long, the videos on stadiumsupertrucks.com are awesome and we are building a lot of buzz for the series. It’s exciting to announce that tickets for the first three events will be on sale this weekend just in time for holidays” explained Stadium SUPER Trucks Founder and President Robby Gordon.

UNIVERSITY OF PHOENIX STADIUM – On Saturday April 6, the University of Phoenix Stadium will play host to the return of off-road truck racing to the stadium setting, as Robby Gordon’s Stadium SUPER Trucks invade the field for a night of action packed off-road racing. Tickets for adults start at just $20* while kids receive $10 off admission.** Drivers from all forms of motorsport will hop in the specialty built Stadium Trucks, BIGFOOT® Monster Trucks, Quads and Side-by-Side UTV’s to take on a challenging course full of cross-over jumps with tight and technically turns making it an exciting event that you won’t want to miss.

GRAND PRIX OF LONG BEACH – The second event of 2013 will take place prior to the start of the IZOD Indy Car Series Toyota Grand Prix of Long Beach on Sunday April 21. Witness the Stadium SUPER Trucks take to the asphalt streets launching over metal jumps, flying 120 feet and drifting through the twists and turns of downtown Long Beach making this a must see for racing fans of all types.

LA MEMORIAL COLISEUM – Entering the 90 year of operations the historic Los Angeles Memorial Coliseum has hosted many exciting events over the years, but on Saturday April 27 following the steps of the late Mickey Thompson, Robby Gordon OFF-ROAD will bring back the return of Stadium off-road racing at the location of its birth. This night surely looks to be one of most memorable events of the 2013 season.

“Having hosted two Olympiad, a World Series, two Super Bowls, a Papal Mass and some of the largest names in rock n’ roll, no other stadium can match the history of the Coliseum. To play the Coliseum, you had to be the biggest and the brightest – the best of the best! Mickey Thompson knew that if he was going to bring the biggest and best of desert racing into a stadium, he had to do it in the Coliseum…and stadium off-road racing was born! The Coliseum is absolutely thrilled to be part of the Robby Gordon’s 2013 Stadium SUPER Truck Series and once again experience the death-defying truck leaps from the Peristyle to the floor of the Coliseum 180′ below. The roar of tens of thousands of fans will welcome Robby and wake the ghost of Mickey Thompson, and the many others that came before!”

Make sure to secure you place in history by purchasing tickets to the first events of the Inaugural Robby Gordon Stadium SUPER Truck Series today! Tickets at can purchased at http://www.ticketmaster.com, Ticketmaster Retail locations or at the Stadium Box Office for the April 6th event at the University of Phoenix Stadium and for the April 27 event at the LA Memorial Coliseum. Tickets for the Toyota Grand Prix of Long Beach on April 21st can be purchased by visiting http://www.gplb.com/ticket-prices/ or at the event’s Box Office.

Robby Gordon OFF-ROAD is a new breed of off-road featuring live motorsports, bringing back what was once the concept of legendary racer Mickey Thompson. Robby Gordon’s new concept of Stadium SUPER Trucks involves high-powered off-road trucks racing side-by-side on challenging dirt tracks consisting of huge jumps, crossovers and tight corners. Comprised of 12 heart-pounding races providing action in the greatest venues across North America. Professional drivers race for a huge Championship purse – the biggest in off-road today. Other classes involve BIGFOOT® Monster Truck racing, Quad racing and UTV racing all held in stadiums that we keep you on the edge of your seat!