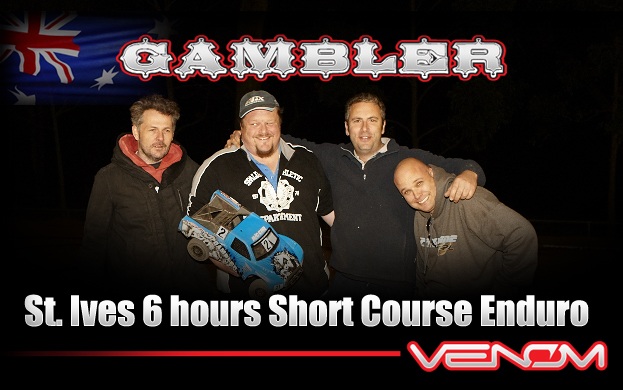 On Saturday May 14th, Venom Team drivers Darryn Johnson and Michael Harlow, together with their teammates Antony Geerno and Tom Clifford, assembled for the inaugural running of the St. Ives 6-hour Short Course Enduro.

This punishing 6-hour enduro was run at the St. Ives track in Sydney, Australia. With some of the best drivers of short course trucks in the state of NSW entering the event, the competition was hot to say the least. 8 teams entered, with all of the leading 2wd short course truck brands being used at the event.

Earlier in the day, the team tested both the rear and mid mount positions for motor placement, but decided to run the truck rear motor due to the difficult, slippery and cold conditions. Over the course of the event, the lead changed many times, with the Gambler sitting in the top three for the entire race. Throughout the event, the Gambler had absolutely no failures and performed flawlessly. Towards the end of the race, with strategies finally working out, the Gambler team, “Know when to hold ‘em,” took the lead with 20 minutes to go and secured the victory with a 2 lap gap to second place.

An incredibly hard fought race over 6 hours where the Gambler once again proved its reliability and endurance after its victory at the JConcepts Clash earlier in the year with team driver Darryn Johnson. The team was obviously delighted with the result, sighting the reliability of the Gambler as one of the main factors in the victory as many other trucks suffered mechanical issues of some kind throughout the event.