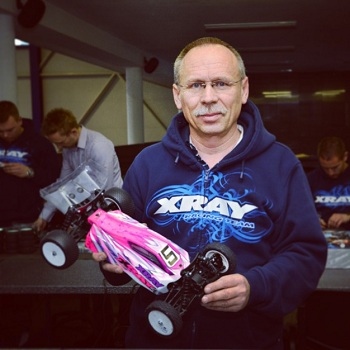 XRAY has announced that they are developing a new XB2 buggy to compliment their recent release of the XB4.  They had this to say on their recent testing:

Reno Savoya, Martin Bayer, Jirka Mára & Juraj Hudy are on the way to Dortmund, Germany for the last round of European Off-road Series – EOS. The XRAY factory off-road team was testing at the new indoor off-road track at HUDY Racing Arena for several days the very first XB2 prototype.

“At the last EOS race, less than 1 month ago, I got an idea to modify the XB4 into a 2WD version so I could use the track time and drive in 2WD class as well. The quick modifications I have made at the race amazed me and this crazy idea stayed in my mind. After coming back to the factory the R&D team has worked extremely hard for several weeks and the production was even more busy with all the prototypes to be made, we have even designed and produced few moulds in a new record time – just incredible what our team is able to achieve when is motivated and excited.

We have quickly designed a very first 2WD prototype based on the XB4 platform and in just few last weeks got the first prototypes ready to test. To be able to test the prototypes we have built within few days own indoor track and had Reno, Martin and Jirka to come over. For the last few days the racing team has worked very hard from early morning till very late night to build the prototypes and to get some first hand-on experiences and to have some basics to start building on for the next development. I am really excited about this new project and I have been very proud of what we have achieved in just few weeks. We are ready to hit the tracks with the very first XRAY XB2 prototype.”

If you like this article, check out this additional article on XRAY.