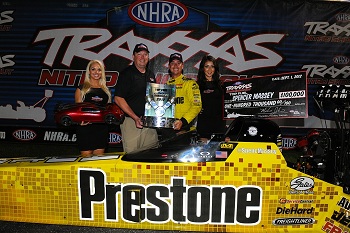 Despite the rain at the U.S. Nationals, the NHRA managed to squeeze in the Top Fuel portion of the Traxxas Nitro Shootout on Saturday night, September first. After three rounds of tough competition, Spencer Massey walked away with the Top Fuel Traxxas Nitro Shootout Trophy and a check for $100,000, courtesy of Traxxas. Spencer edged out Dave Grubnic in the first round, the Fan Vote winner Brandon Bernstein in the semi-final round, and defeated Steve Torrence in the final! Spencer made three great passes, impressive in that each team only got one look at the track prior to the first round of the shootout!

The Final Eliminations of the U.S. Nationals and the Funny Car portion of the Traxxas Nitro Shootout have been re-scheduled to this upcoming weekend due to rain. Traxxas Nitro Shootout festivities will resume Saturday, September eighth, and the U.S. Nationals on Sunday, September ninth. Following the final round in Indy, the top 10 drivers in each category will be locked in to the 2012 Countdown to the Championship! At that point, the points for the top 10 drivers are leveled off and the playing field is set. From then on out, it’s a six-race chase to see who will finish off the 2012 NHRA Full Throttle Drag Racing Series as the Champion!

Come out the NHRA races this weekend! With Courtney Force and the rest of the Traxxas John Force Racing team locked into the Traxxas Nitro Shootout, you wont want to miss the chance to root on your favorite driver! Our entire activation staff will be back at the track this weekend. That means you can experience everything that Traxxas has to offer, whether it be our dirt Try-Me track, Big Air demos, or full line of vehicles on display! We hope to see you there, but if you cant make it to the track, check out Traxxas Racing Facebook and Twitter pages for live updates.