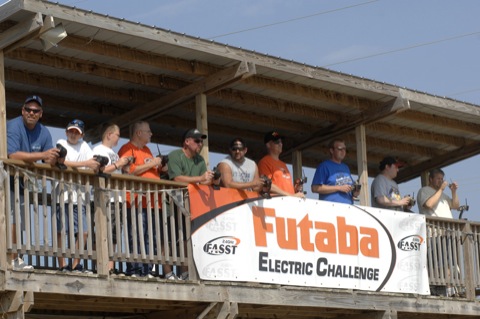 What the fast guys are doing

Why are the fast guys so fast? Once you get past the erroneous notion that everyone who’s faster around the track simply has faster stuff, you’ll probably decide the difference must be natural ability. Sure, a lot of it has to do with reflexes, hand-eye coordination, depth perception, etc. Reality check time. Just as much, if not more, of the fast guys’ success has to do with what’s going on in their heads. Strategy and mindset are a huge part of racing, both for RC and full-size. Incorporate the following tips into your racing routine and you’ll soon be one of the fast guys. 1. Don’t overshoot turns. This is one of the most common mistakes we see racers making. Flying into a corner, letting off the gas and washing out way wide scrubs off substantial speed and is a total momentum killer. Slapping your ride off the outside barrier makes it that much worse. Sometimes wide is the fast line around a corner, but you need to make sure you slow down enough before the corner so that you maintain the exact line you wanted to take. If your vehicle isn’t doing exactly what you want it to do and you aren’t in total precise control, you’re going too fast. If you slow down properly before a corner, you will be able to accelerate through the corner and be going faster for a longer portion of the following straight than the guy flies in deep and has to accelerate from almost a stop in every corner. 2. Don’t take unnecessary chances.  Double and triple jumps give you options. It’s simple; you can take a set of doubles as single jumps or jump the gap and land on the downside of the second. The same goes for triples. You can single-single-single, double-single or single-double. You might even be able to sky over a triple as one big jump. Here’s the key: know your limits, Knievel. During practice, time how faster you are through a section when flying over, say, a wide double compared to taking it as a single-single. The reality is that you’ll probably only pick up a couple tenths of a second. In contrast, crashing will cost you multiple seconds. So, never take a big jump unless you can clear it 100% of the time. 3. Don’t make the same mistake more than twice. Tracks change throughout the day, and often sections that we were able to drive through cleanly during practice and the qualifiers, we can’t during the main event. How many times have you been corner marshalling and seen the same vehicle crash on the same obstacle every lap? Don’t be that guy. If you go through a corner and flip once, it may be a fluke. If it happens twice, you’re probably catching a rut or simply going in too fast or nailing an exposed rock. It actually doesn’t matter. Just change up your line. The same goes for jumps. If you case the landing on a big jump once and crash big, you might have just goofed. If it happens twice, you’re probably aren’t getting the run up you need to clear the jump or the face of the jump has changed. Change your line and don’t try the big jump. 4. Walk the track. That nice elevated view from the drivers’ stand might allow you to see the whole track, but it also prevents you from seeing the whole track. Get down and walk the track. The pros all do this for a reason. Look for all those ruts and divots that you’ll never be able to see from the drivers’ stand. In addition to finding obstacles you need to avoid, take a good look at how you want to progress from corner to corner. See how exiting one corner will set you up for the next turn or jump.  Sometimes it will make sense to exit a corner wide so that you are properly positioned to cut the next corner tight or avoid a rough section. Do a walk during practice and then again before the mains. Rhythm sections often get worn down in spots by the time mains roll around and a close walk will reveal a smoother, faster line than you had been taking. 5. Don’t panic. No matter what, it’s just a toy car race. If you get passed, forget about it. The harder you try to chase someone down, the more likely you are to lose focus and crash. If you get in an accident and get passed, the only thing you should think about is driving cleaner. If you focus on regaining spots, you will make more mistakes and continue to fall back. While you have to be aware of the other vehicles and be a courteous driver, it is actually best to run your race as if you’re the only one out there. This mindset will keep you focused. If you get hacked, instantly let it go. Every second you’re thinking about it is less time you concentrated on driving your best. 6. Set realistic goals. There’s a lot more to racing than just where you finished. After each round of qualifying, look at your best lap time, average lap time and total laps and try to improve on those in the next round. Do that and the victories will follow. If you are already winning, this strategy will keep you on top. When reviewing your times, if your fastest lap is significantly faster than your average lap time, you’re not consistent and the likely cause is crashes. Drivers who focus only on finishing position rarely see improvements.