We love RC bashing in all its forms. You name it; we’re all about it. Off road, on road, low speed, high speed. If it can be bashed, we’re on it. Now when Arrma came out with a bash-specific on road platform that was designed expressly to go as fast as possible, we knew we had to get in on the action.

Arrma’s Limitless isn’t a delicate race vehicle that was converted to become a basher, no. It’s a basher through and through, engineered to take whatever driver and road can throw at it and still come out smelling like roses. Taking the low-drag shape of what we would describe as a futuristic Formula One car, the 1/7-scale Limitless is a large four-wheel drive car that measures almost 30-inches long. That’s well over two feet of go fast vehicle to contend with and we were up to the challenge. 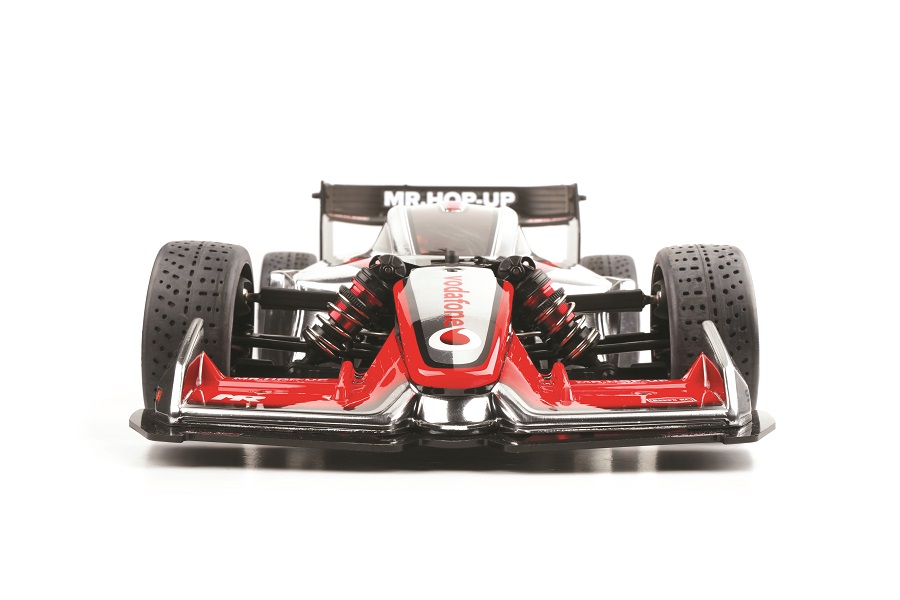 Limitless comes out of the box as a roller; that’s to say that it’s almost completely built at the factory minus its electronics, motor and pinion gear. The electronics and motor need to be provided separately by the owner, which opens up plenty of build opportunities. An optional 27-tooth pinion gear is included. When we first thought of reviewing the Limitless, we though to outfit it as a modest 4S powered car, which would still be plenty fast for most areas that we could drive it up to speed. Then the speed bug really bit us.

Living up to its name, we soon realized that Limitless has virtually no limits in terms of its power options. Its sheer size allows it to easily take 6S and even 8S-sized components. We thought to ourselves, what if we just went for all out speed and build it up as a brutally powerful 8S basher? The answer of course was yes, let’s go with an 8S setup. 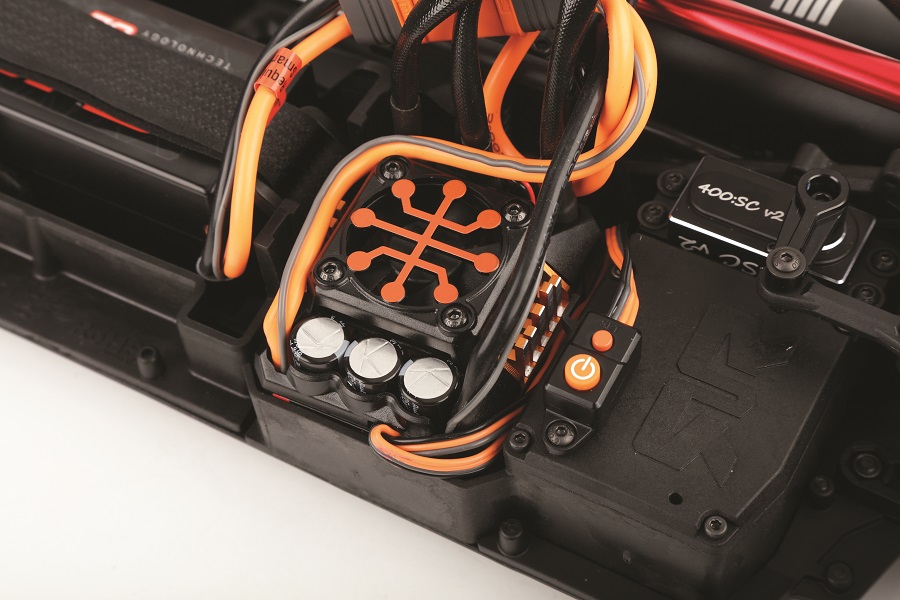 8S power requires an ESC that can handle it. A Spektrum Firma 160A Smart ESC fits snugly into the Limitless’ power module.

Before we jump into the completion phase of the rolling chassis, let’s learn more about the speed basher itself first. Limitless’ foundation is based on a 3mm thick black anodized aluminum chassis complete with a robust red anodized aluminum center brace. Built with power and speed in mind, this rigid platform hosts a heavy-duty 4×4 drivetrain that features durable steel drive shafts plus all-metal diff outdrives and gearbox internals. All that metal gearing means durability for extended bashing; we like that a lot.

Maintenance of Limitless is kept simple by design. The front and rear differential units can be quickly removed from the front and rear gearboxes for fast tuning and servicing. On top of that, its center spool module can be removed by taking out just five bolts, further making drivetrain maintenance work quick and effortless. The center section of Limitless includes an anodized aluminum sliding motor mount and a spool unit. The spool has a thick steel shaft, steel outdrives and a steel spool gear for ultimate durability. 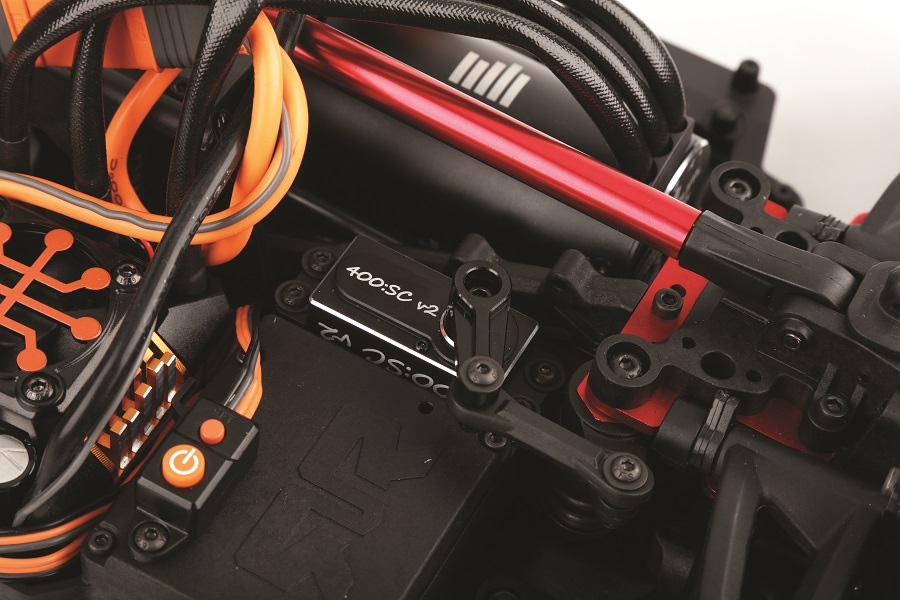 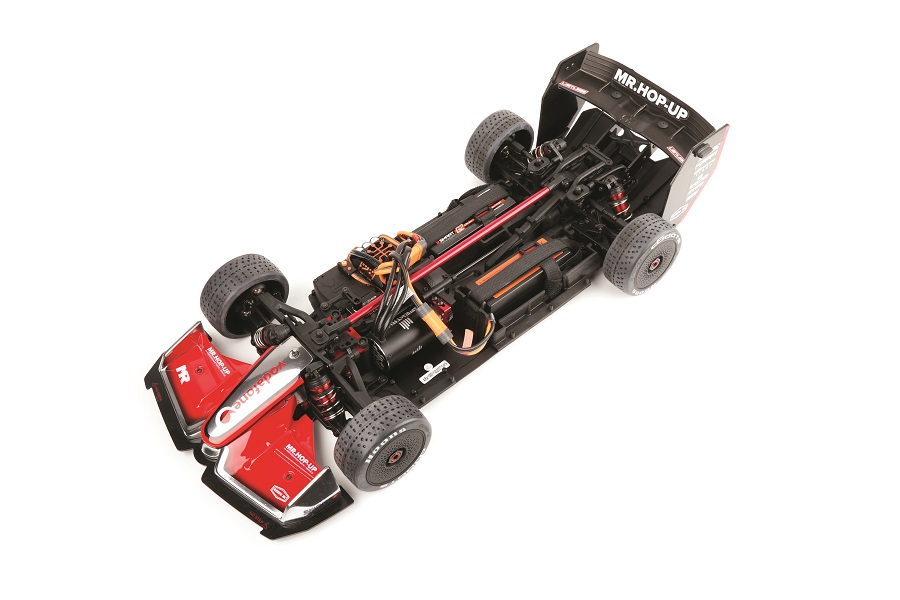 A quick peek underneath the speed basher reveals under-chassis aerodynamic features that were thoughtfully designed into the platform. Having received special attention from the Arrma designers, the chassis and rear diffuser are integrated for slick underside airflow that allows Limitless to hug the surface it glides over. Because Limitless is made to handle triple digit speeds, its front splitter is also designed to balance downforce distribution and the rear diffuser increases downforce and grip for increased stability and control.

Speaking of aerodynamics, its low drag body, which comes painted, trimmed and decaled, works in conjunction with included front and rear wings that can be customized to tailor the vehicle’s downforce to your driving needs. The front winglets can be trimmed or completely removed while the rear wing can also be trimmed to suit how much aerodynamic downforce is required.

We gathered the components together to complete our 8S speed demon. The parts we decided on installing include a Spektrum Firma 1250Kv brushless motor, Spektrum Firma 160A Smart Electronic Speed Control (ESC) and Spektrum SR515 receiver. Tying all this together would be a Spektrum DX5 Rugged 5-Channel DSMR transmitter that we already share with several Axial crawlers. We initially had a Spektrum steering servo teed up as well but in the course of installation, we realized that we needed to use a different servo. We’ll get back to that in a little bit.

Limitless comes with comprehensive instructions on how to install the parts as well as the tools to do it with, which is a nice touch by Arrma. Getting everything installed was pretty easy; we figure that even someone completely new to the hobby can get it done in no time. We first installed the Spektrum 1250Kv brushless motor and pinion gear onto the chassis then moved onto the other components. 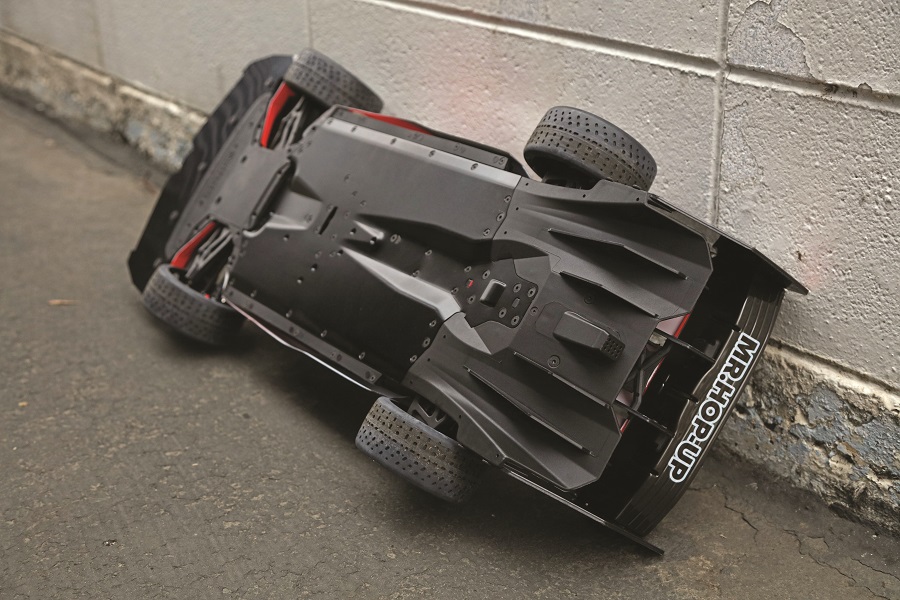 The underside of the Limitless includes working aero features including a stabilizing rear diffuser that is integrated with the chassis for slick underside airflow.

As mentioned earlier, we were going to install a Spectrum servo but realized that the servo horn that comes on the Limitless is made for a 25-tooth splined servo. Our Spektrum servo has a 23-tooth spline, so naturally the two were incompatible. We mention this for those who are planning to complete a Limitless roller to keep in mind the kit comes with a 25-tooth servo horn. We could’ve changed the servo horn but instead, we swapped the servo for one made by Reefs RC, which has a 25-tooth spline. The Reefs RC 400:SCv2 Racing Servo is smooth, powerful and quick, perfect for the demands of an 8S powered basher.

After the servo was in, we moved onto getting the ESC and receiver buttoned up. We were happy to see that Limitless comes with an electronics box, or module, that completely detaches from the chassis for easy outfitting. The electronics module features a sealed compartment for housing the receiver and has plenty of room to tuck excess wire into. The servo and ESC mount to this module to create an assembly that is easily removed for servicing.

We chose the Spektrum Firma 160A Smart ESC because it can handle everything from 3S through 8S LiPo, which is perfect for our 8S quest. One thing we didn’t count on was the overall size of the ESC. While it is bigger than many other ESCs, it still fits into the electronics module provided we cut its mounting tabs off of it. The ESC comes with two tabs that stick out either side of the base. Those tabs are usually used to secure screws through them on other platforms. Limitless didn’t have the space for the tabs so we used a pair of side cutters and clipped them off. It was painful to do on such an expensive piece, but it had to be done. After the tabs were removed, the ESC fit into the electronics module like a glove. We secured the ESC in place with servo tape. With everything installed, we made sure that any wires didn’t make contact with any moving or potentially hot bits. After everything checked out, we moved onto the body.

Limitless comes with a fully painted and detailed body, which looks nice in its own right. That said, we rarely roll with box art bodies and was happy to get one customized for our build. Being that Limitless looks a lot like an F1 car, we decided to go with an F1-style livery. We contacted Matt Brase of MR Custom Painting to see if he could help us paint up a McLaren F1 team inspired livery onto an extra clear Limitless body that we had. He was very helpful and after we ultimately chose to go with a scheme based on McLaren’s Vodafone-era livery, Brase got to it.

As you can see, it turned out great. The fluorescent red, mirror chrome and black color scheme is eye catching and looks sharp from any angle. Brase prides himself on painting complete liveries including logos, which means that the Vodafone logos, the Bridgestone B and his MR logos on the body are all painted on. Those are not stickers. Amazing, right? What are stickers however are a few decals we added by dedicated RC decal maker Mr. Hop Up. Working in concert, we think the look is just right. 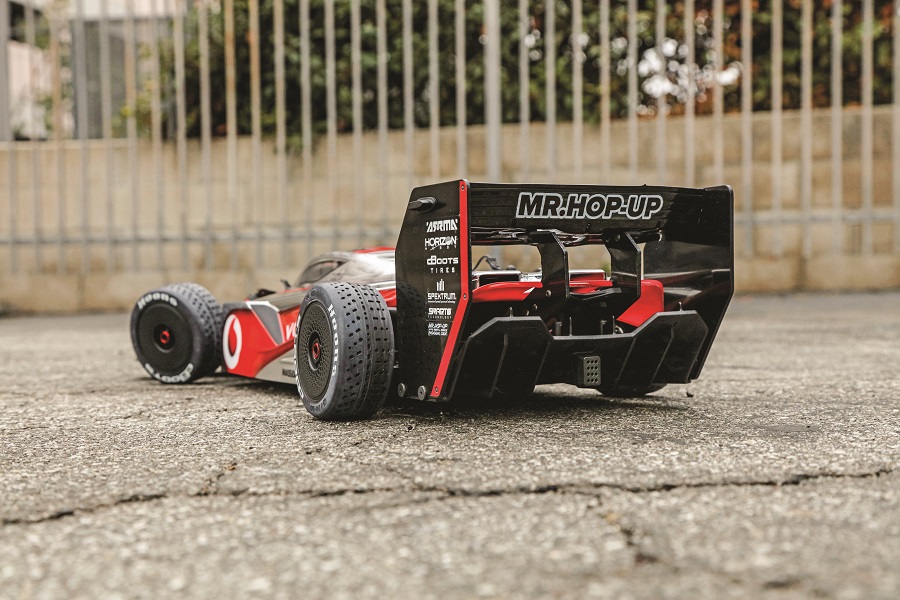 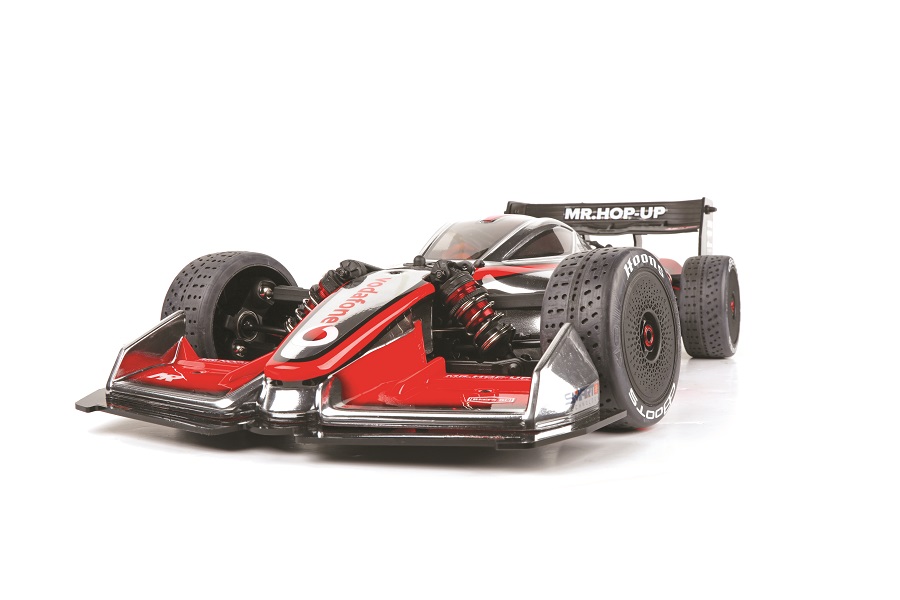 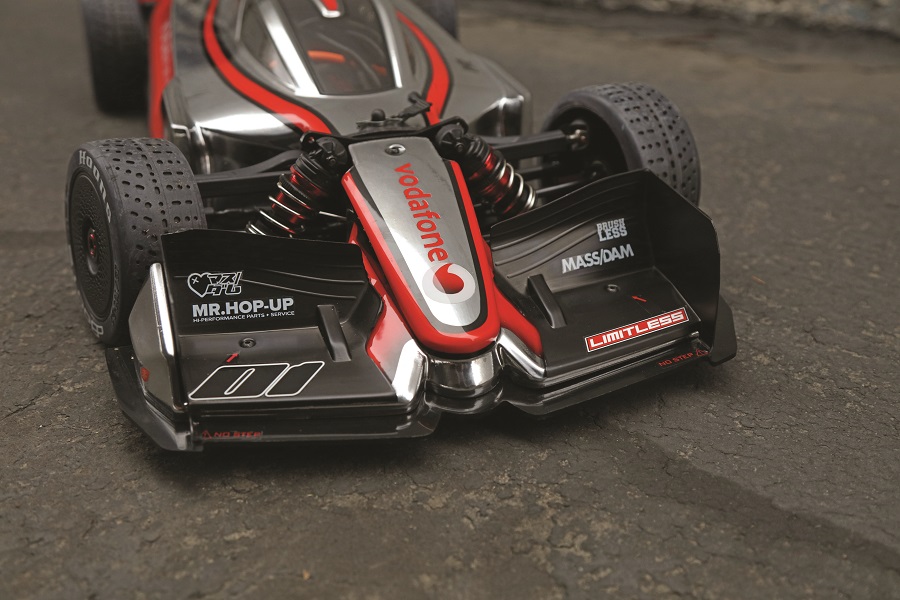 Optional front winglets feature molded-in cut lines allowing you to trim them to tailor the front downforce and drag level to your preference.

With the car ready to go, we charged up a couple of Spektrum 14.8V 5000mAh 4S 50C Smart batteries and strapped them into the Limitless’ two extra-large battery trays. The batteries are held in tightly with two hook-and-loop straps. When we initially decided to go with an 8S set up, we already knew that we didn’t have easy access place that will let us really stretch its legs. We made due and used the parking lot at our office, which is decently sized but nowhere as much as we needed to get to top speed. We first took a few low and mid-speed laps, noting how the speed basher felt. With batteries installed, the car weighs almost 13 pounds and we could feel it in the way it handled, in a good way. It felt stable and surefooted. That’s a characteristic we would want from a car that can hit triple digits. We really like the way the car feels, it’s just so confident even on not-perfectly-flat asphalt.

After we built up our confidence, we tried to go flat out from one end of the parking lot to the other. We ultimately got it up to a blistering 89 miles per hour according to our SkyRC GNSS Speed Meter. It was fully stable and we didn’t sense any straight-line instability even at those speeds. With a bit more road, we’re confident it would hit close to or maybe even over the 100 mark. Not bad for an out of the box roller with no mods other than what we installed. Arrma wasn’t kidding about creating an all-road speed basher. 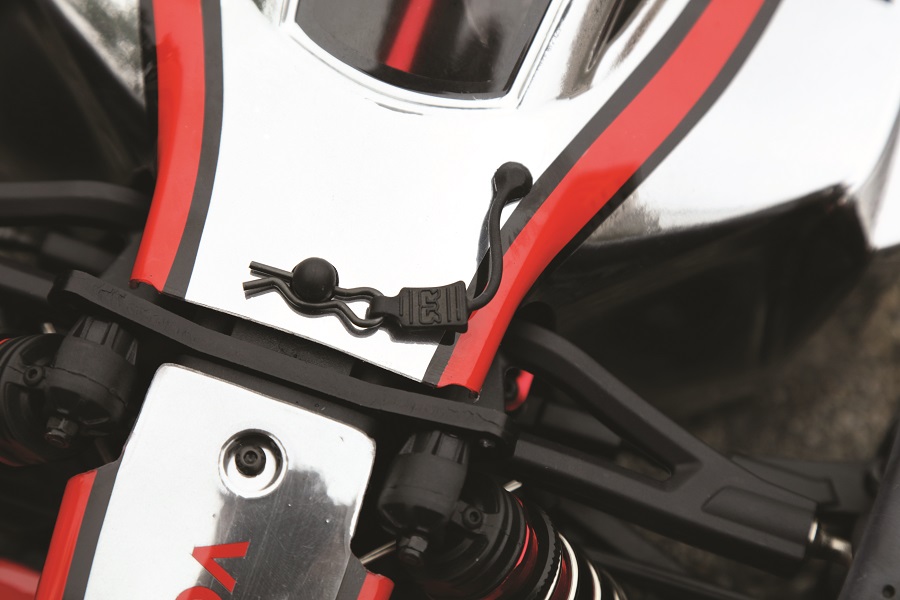 Body clips are kept in place on the body with handy body clip keepers. 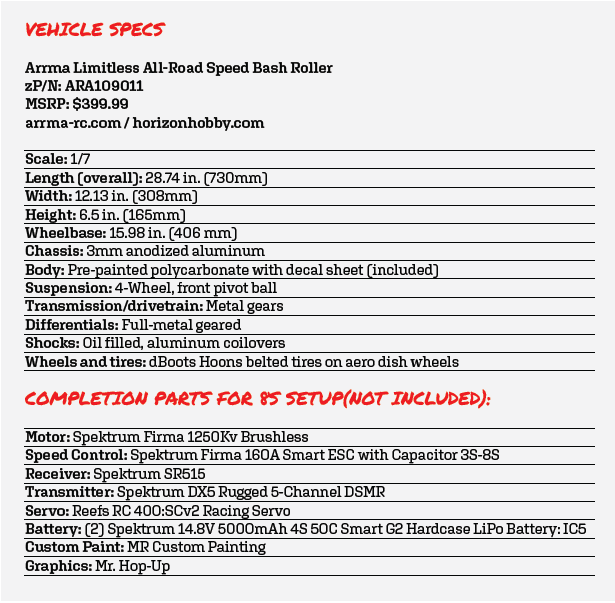 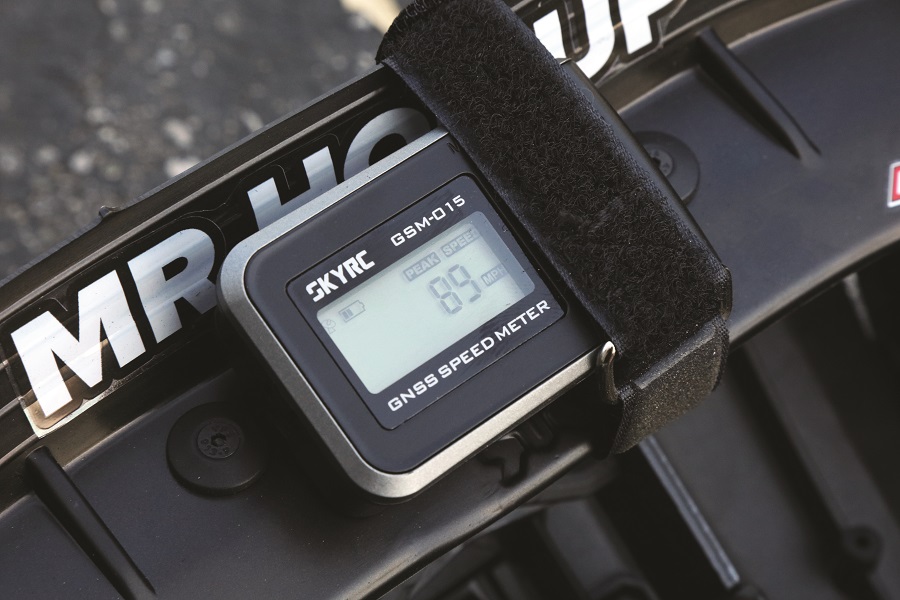 The restricted area that we had to drive hampered our top speed runs, but our 8S powered Limitless still got up to 89 miles per hour. Not bad at all for an out of the box roller.

We can’t say enough out the Limitless. It’s seriously quick and fun to bash around. Its inherent stability and natural straight-line driving gives you the confidence to go for high-speed runs (where space and safety permits). Just how fast can an 8S-powered Limitless go? If we start playing with the gear ratios, alternate motors and batteries, we’re sure that the Limitless is capable of the ludicrous speed that even Dark Helmet would approve of. A quick search on YouTube revealed modified Limitless’ routinely going well over 150 miles per hour and even some topping out beyond 170. Now that’s truly ludicrous!