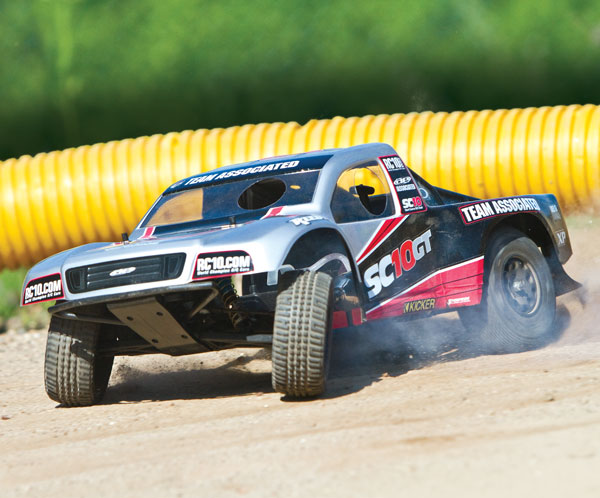 The SC10 is one of Team Associated’s most popular vehicles. It offers up great performance,  lots of tuning options and great looks that are appealing to both racers and bashers. A lot of the DNA of the SC10 is borrowed from the company’s T4 2WD off-road electric truck. Naturally, due to the popularity of brushless motors and LiPo power, the first group of trucks released were all electric powered. The latest SC10 from Team Associated takes a step away from the norm and uses nitro power to get it going. This time, the truck is based on the wildly popular (at the time) and multi-time winning ROAR nationals champ RC10GT. With features such as a smooth ball differential, V2 slipper clutch, V2 shock and more, you can’t go wrong.

PRO TIPS
Factory Team options
Since most of the parts on this truck are directly from the Team Associated RC10GT2, you can use the option parts available for it. Then you can install items such as titanium turnbuckles, threaded shocks, lightweight outdrives and more.

Faster fill-upUse a drill to make a small hole in the handle of the stock fuel tank and install a long wire tie through the hole. Run the tie out the back of the body. Now you have an easy to grab handle for opening the fuel tank during fuel stops.

Fresh air
The stock body doesn’t have a cutout for the exhaust which means that some of the exhaust will stay in the body and make its way into the engine. This won’t hurt the engine, but it won’t allow it to run at its full potential due to the fact that it’s not getting all the fresh air and fuel that it could get. Cut a small opening out of the body in front of the stinger on the tuned pipe and more of that exhaust will be able to escape.

2.4GHz radio
Like all Team Associated RTR vehicles, the SC10GT comes with a XP3-SS radio system. It’s a 2.4GHz unit so there’s no need to worry about any frequency conflicts or radio glitches when running your truck. Some features of this 3-channel radio are servo reversing, throttle endpoint adjustments, throttle and steering trim, and dual rate. The radio is powered by 8 AA batteries and three LEDs on the face of the radio tell you how much battery life is left.

Painted body
The body on the SC10GT is molded to look just like the ones used in the Lucas Oil Off Road series. You can pick up the body with a silver and black paint job or a blue and black paint job. Both come stickered and the cutouts for engine cooling, starting and fuel tank filling are already cut out. Having holes already cut out of the body should greatly reduce the parachute effect of the body right out of the box.

Low CG transmission
The transmission is as compact as you can get and it uses a stepped idler gear to make that happen. A ball-type differential comes packed inside the low center of gravity transmission. It’s a 12  ball-type unit and comes factory set. Steel outdrives on the differential are used to spin the dogbone driveshafts. To protect the gears inside the transmission and to give you some type of traction control, Team Associated has included its V2 slipper clutch with this truck.

.18 size power
A Team Associated .18X engine is included to get the SC10GT moving. A durable pull-starter with an extended pull-start handle is used to get the engine fired up, but if you have a starter box, you can use that as well thanks to the large diameter flywheel installed on it. An oiled air filter cleans the air entering the engine and the power output is ramped up by an aluminum tuned exhaust pipe.

JConcepts rubber
With all that power on tap, it’s very important to get that power to ground so that it’s used to its fullest. To make that happen, Team Associated has included JConcepts Subcultures tires with the SC10GT. They come molded in a soft compound and the mini tread pattern is a good starting point for most surfaces. The soft tires are supported by foam inserts and they come glued to realistic-looking, one-piece wheels. Up front, you’ll find a harder compound rubber with a more realistic tread pattern.

A larger tank!
An awesome benefit to having a nitro-powered vehicle is that you can pretty much keep the truck running as long as the receiver battery has power. With today’s technology, that can be a pretty long time. The only requirement to keep your truck running is to refill the fuel tank when it gets low. The SC10GT comes with a ROAR-approved 75cc size fuel tank will give you a good amount of run time. You can gain more run time on the tank by not installing the insert, adding more fuel line and or a large fuel filter. With the SC10GT, you now also have the option of installing a larger 125cc 1/8-scale tank, which will add a considerable amount of run time. If you look closely around the stock tank, you’ll see two mounts that will line up with a Team Associated 1/8-scale tank (part no. 89324) and an insert next to it that is removable to make room for the larger tank.

Support gear
In order to save you some money at the local hobby shop, Team Associated includes a few items that are necessary to get the SC10GT up and running. To fill the fuel tank, you get a large 350ml fuel bottle that features a removable top and a rubber plug to keep debris out. You also get a glow starter that will accept a large C-size battery. Some basic tools are also supplied.

PERFORMANCE
We get a lot of vehicles in the office to test, but this truck was right up at the top of my, “I couldn’t be any more excited” list.  Before hitting the dirt, I took the time to break-in the engine and made sure that all screws were tight, that the truck was built correctly and that the servos were trimmed. Knowing that I’d be racing my SC10GT, I headed right to Pin Shop Hobbies in Oakville, CT, to get some laps in. It only took a tug or two of the pull-starter to get the .18X ready for some action. While blipping the throttle during the warm-up period, I could tell that this engine was going to be a performer. The transition from idle to full-throttle was smooth and the ballooning of the tires told me that I had some good power on tap for the day. I drove the truck around for a few laps to get used to the power band and to get a feel for the radio and servos before letting it rip. When coming onto the straight, the SC10GT took me by surprise and pulled a slight wheelie as it rocketed up to top speed. The included JConcepts Subcultures tires really hook up; this truck can put the power down! I gave the brakes a quick stab and the tires locked up as the truck entered the large banked turn at the end. The brakes on the SC10GT are plenty strong and there was enough braking whenever I needed it. For the rest of the run, I eased up on the brake on the radio instead of adjusting the throw of the throttle/brake servo. It’s always better to have more brake than you need just in case you get in trouble. Coming out of the turn at the end of the straight, there’s a large triple that only 1/8-scale buggies and some truggies are able to clear; however, with the GT I was able to make it a double easily. The truck flew through the air with level flight over most of the jumps on the track. I did  see some jumps where the truck tilted to one side. I’m not sure if that was because of the shape of the jump or the left to right side balance of the truck. Thanks to the strong brakes, I had no trouble getting the truck slowed down for the turns but I did notice a good amount of a front push at higher speeds. I attribute that to the included hard compound front tires. Bashers won’t mind the front tires, but if you’re a racer, you may want to look into more of a racing inspired-type front tire. The suspension soaked up the small bumps in the track very well; I was really able to pull on the trigger and get moving because it was so stable.
Wrap-up
I am so glad to see that Team Associated released this truck. Part of what makes a RC short course trucks so cool is that they look like the full-size trucks and are very similar to them when running on the track. Adding the sound of an engine and the smell of exhaust takes this truck to another level. Could this new truck be the start of a new popular class of RC short course? I sure hope so. Until we find out, I’ll be running this truck a lot in the 2WD modified class at my local hobby shop. It may not be a gas truck, but it’s close enough to me.
Read the full review in the September 2012 issue of RC Car Action