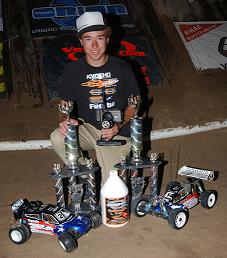 Team Associated and Kyosho ace Jared Tebo won both Pro classes at the Silver State Nitro challenge. The Kid started second for the main event in the 1/10 Pro class, battled early with The Drake, and eventually settled his ODonnell-powered Factory Team GT into the lead. Trinity’s hard-charging Ryan Cavalieri dueled with Tebo in the back half of the race, often looking faster. The two must have swapped spots a dozen times, and it was an edge-of-your-seat thriller as Tebo got a better run down the nasty, rutted back straight on the last lap to sneak by for a 1.1 second victory over Pudge. Click “More” for 1/8 action.

In 1/8, Tebo had troubles during qualifying and was forced to bump up from the B-main. He won the B for a 12th place spot on the A-main grid. Early on, it looked as TQ Mark Pavidis would check out and win, but an early flame out forced him pack in the pack. Tebo sliced and carved through the field with surgical precision as he picked off the other racers. As the clock wound down, Cavalieri was up in second and closing the gap, but it wasnt enough to catch The Kid.