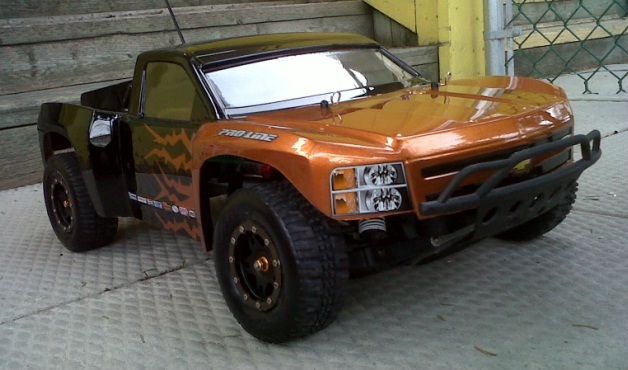 Hey guys, here is a sneak-peek at what’s coming off my workbench. I was able to get a hold of a used Traxxas Slash 2WD a little while ago. I’ll have before and after pictures and project progression. This new project of mine has been a longtime coming. Ever since the short course truck (SCT) class arrived in Canada at all the local tracks, it didn’t take long for guys like me (former 1/10-scale gearbox class driver) to want to get in on this new class. Before you knew it everywhere you looked and read it was all about SCT. I mean, we JUST got over the scale rock crawling phase in Canada. But did we? I’m glad to tell you while rock crawling was THE class and rig to have, it’s still alive and well. But it does have to bunker down with the SCT craze. We just finished up our indoor carpet season across the country, at most tracks. A lot of us are now prepping and getting ready for the dirt season. So I say “If you haven’t picked up a SCT yet, you’re missing out!”  It’s a lot like busting around the track in that 1/10-scale 2WD gearbox but better. This will be my first racing season with a SCT, so it’s bound to get exciting as the weeks roll into summer.