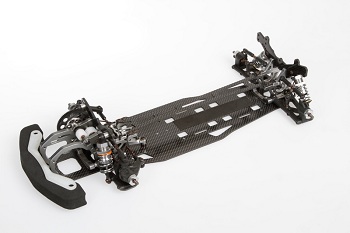 Serpent has developed a new version of the Serpent 411 with front wheel drive only. Check out the details below:

The suspension design is very similar to the Serpent 411, and it shares most components, with the rear end almost same, but the front end features the forward mounted motor-brackets and the new front gear-diff design. Design has taken care of keeping the superb car balance, with lots of traction and steering, to create a superfast but still easy handling 411-FWD.

The Serpent 411 FWD has been tested thoroughly and is now undergoing the final test-work in German indoor tracks. For the moment using a 48/78T gearing, close to 2.6.

The Honda Civic is a popular body-style in this category. The FWD class is very popular in a number of countries and is raced mainly as stock class. The class deserves more participants, as the FWD cars are so different and fun to race, it will positively amaze many ! In Europe plans exist for a FWD Endurance race series, with Teams of 2 or 3 drivers doing 4 hour races. Lets make it happen!

More info and final images to follow in a later stage. The Serpent 411 platform will be extended with even more models in the near future , so stay tuned.