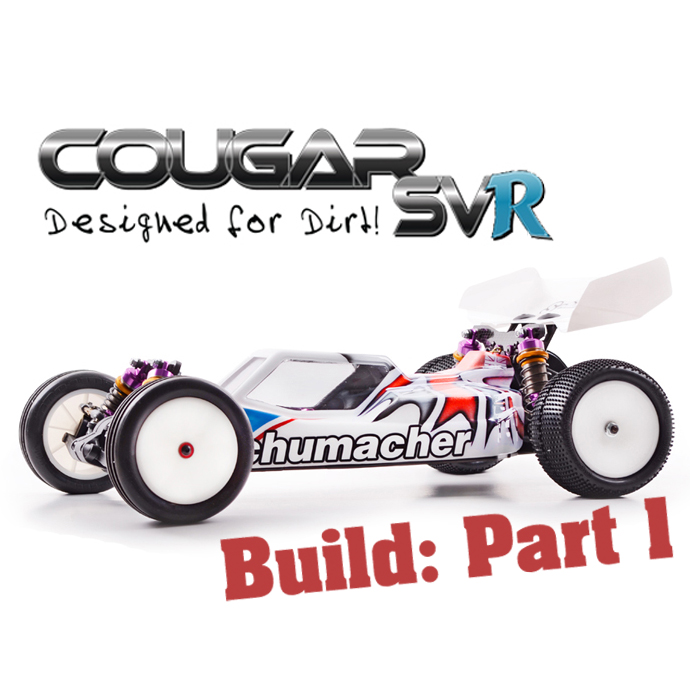 Welcome to the first installation of the Schumacher Cougar SVR build along. Schumacher’s rather unique approach to design has always set their vehicles apart and the SVR appears to be cut of the same cloth. It was designed in line with the rest of the Cougar lineup but has been massaged for lower traction dirt applications so it’ll be perfect for testing here in Connecticut. First up and aluminum  chassis plate is included but not in the sense we’ve grown accustomed to seeing lately. This one is a standard plate style similar to graphite chassis of the past. The kit comes with a set of pin drive rear and bearing support front wheels vs. hexes all around but no tires are included so you can mount up whatever treads work best for your track. The body is a cab forward style with some nice styling cues. 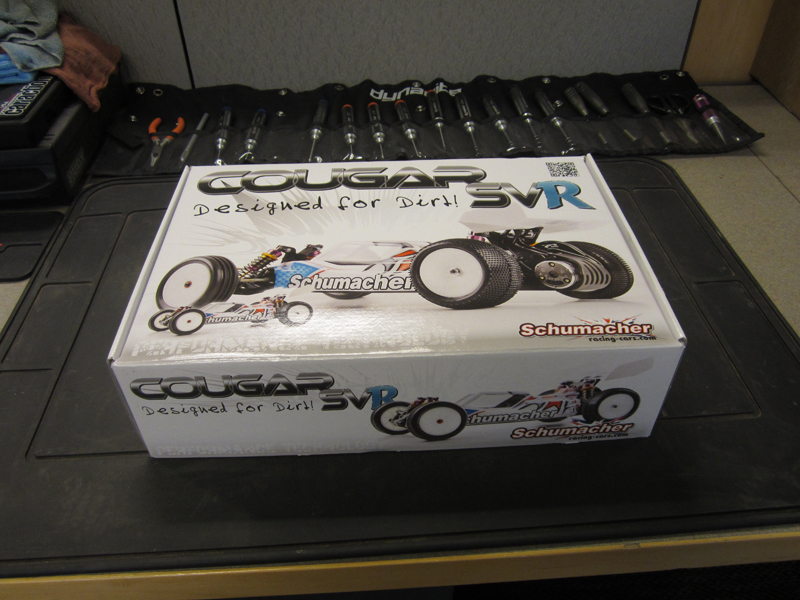 First thing I did was send the body out to be painted by Larry Genova of Kustom R/C Graphics. If you’re not familiar with Larry you’ve surely seen some of his work; Cody King, Ryan Maifield and other pros all use Larry to lay down their schemes. Can’t wait to see what he has in store for us! 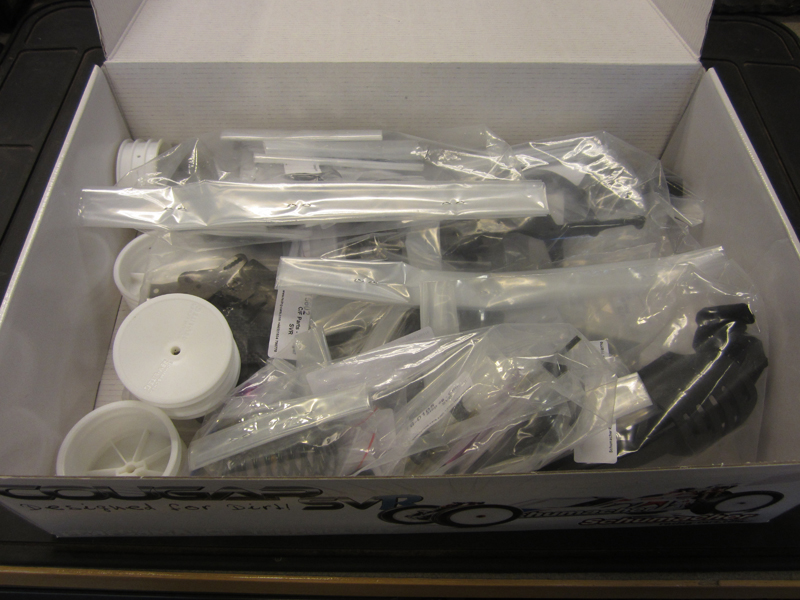 Unboxing the Cougar SVR You can see that Schumacher takes things to the nth degree when it comes to organizing. Each section of the build is in it’s own back with two bags for carbon parts and bumpers bagged up separately. 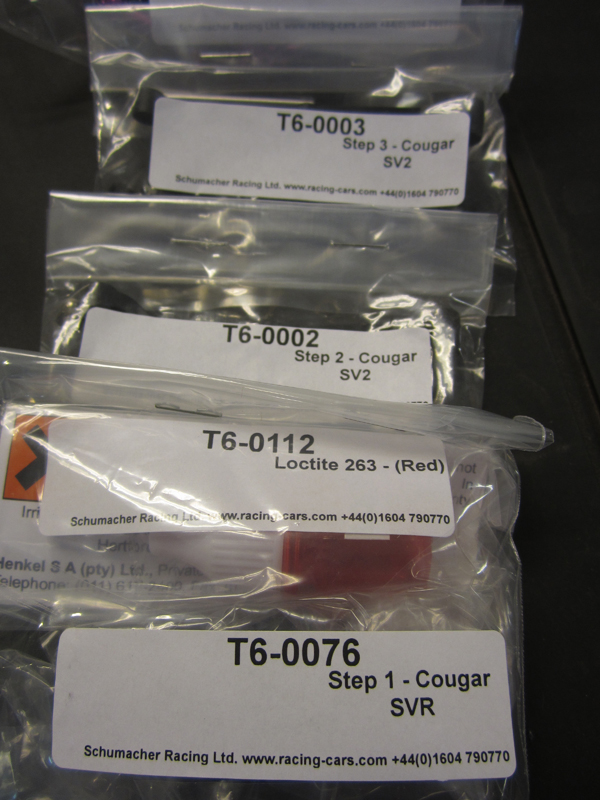 You can see by the labels that each bag is broken up into the steps. Putting them in order off the bat will eliminate having to dig through to find the next set of parts. As you build the SVR you’ll find that everything for a given step is in the bag you open so you only need to open them one at a time. Very organized. 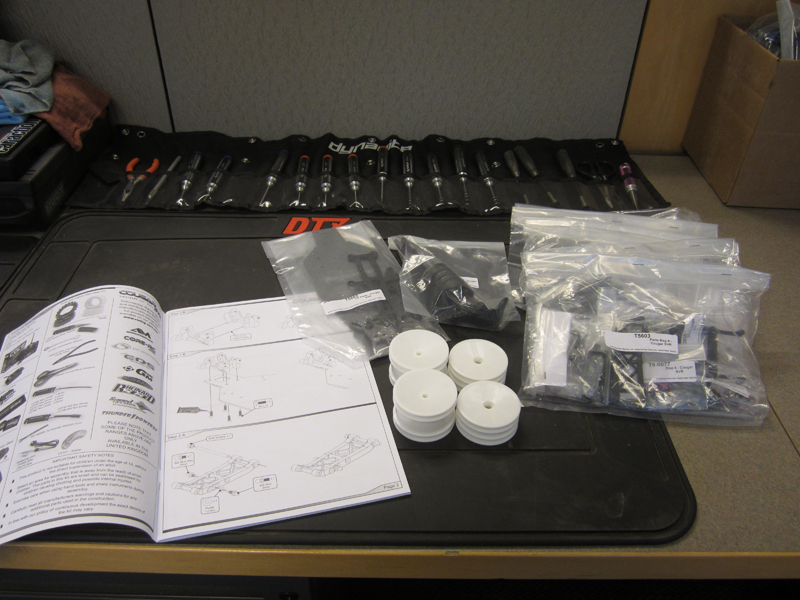 Before I start any building, I always like to take everything out and put it in logical order to make sure everything is there. The last thing I’d ever want is to get halfway through building a vehicle and find out I’m missing something. 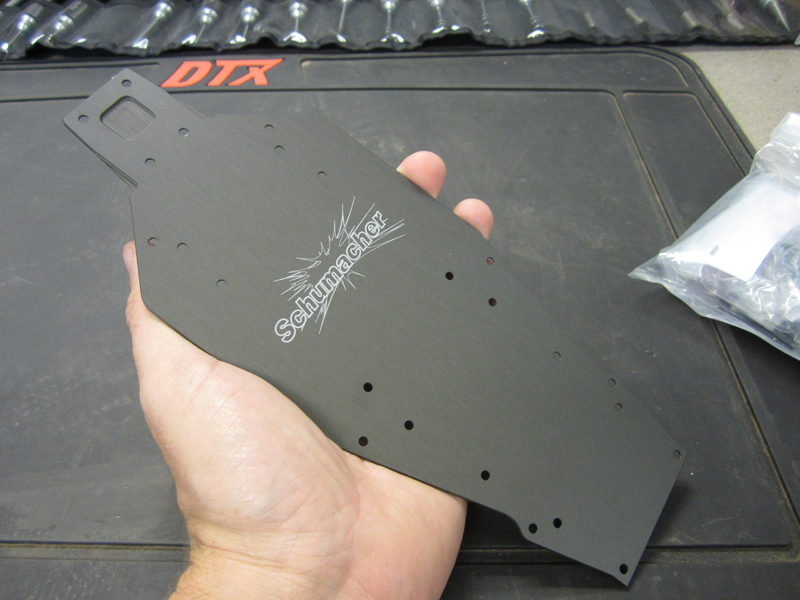 The first part up is the chassis. As you can see it’s an aluminum plate but unlike other modern buggies, Schumacher has opted to go with a flat plate rather than one with raised edges. The flat plate style allows the car some extra flex for low traction surfaces. The piece is very nicely made and has a Schumacher logo lazered into the top for a nice touch. 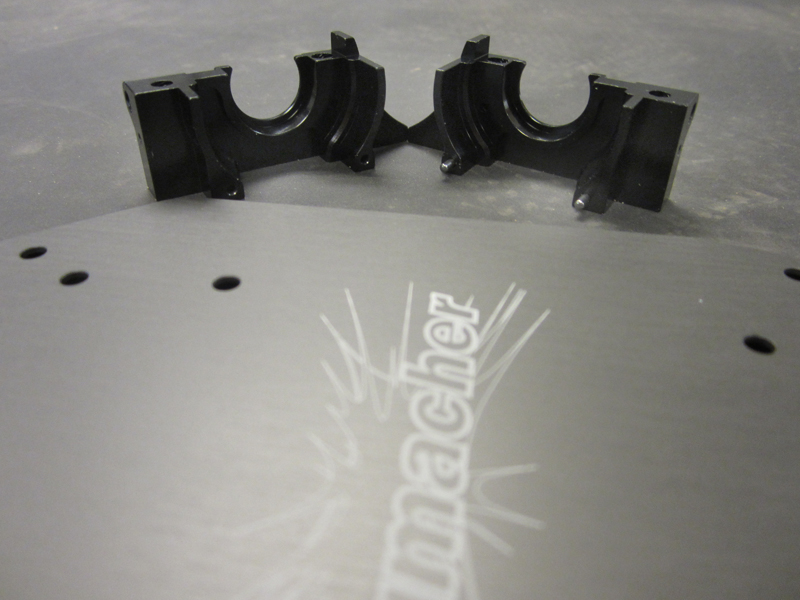 The first parts up for assembly are the rear transmission housing/bulkheads. They’re made out of 7075 aluminum and are pinned for a precise fit. I’ll start by inserting the pins and then putting the two halves together before mounting them to the chassis. Don’t forget the thread lock, their mounting screws come from the bottom of the car so they’re sure to take a beating and you don’t want them backing out during a race. 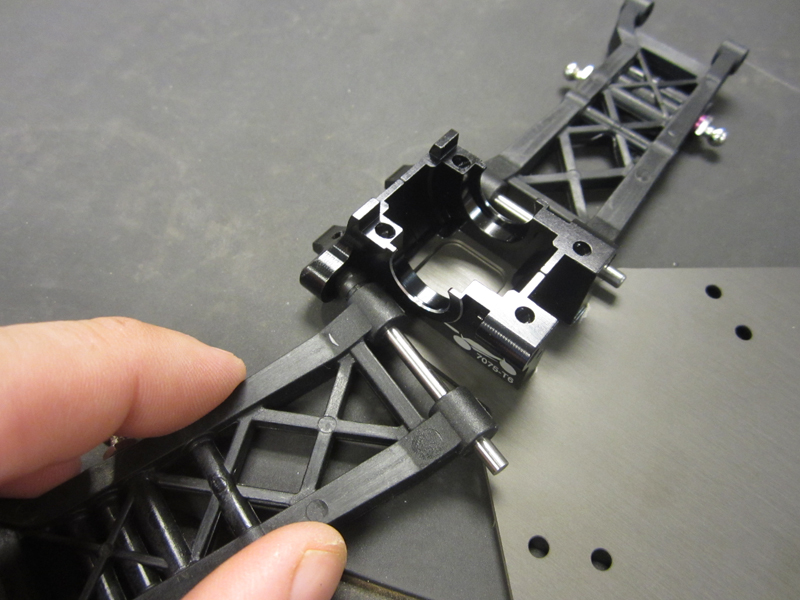 Next up I’ll assemble the rear suspension arms. These arms are mounted to the rear mounts via pivot balls which allow the arms to be moved for various toe and anti-squat adjustments. It’s a good idea to take a little extra time here and shim the arms properly so there isn’t a lot of slop but so they also don’t bind. Taking the final assembly apart a few times to get the right fit may be needed but it’ll make all the difference down the road. 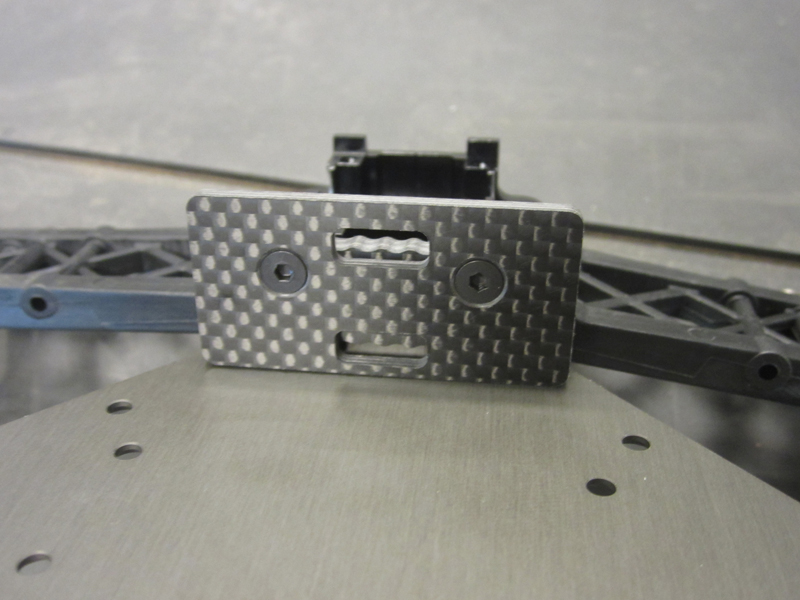 The final part of the rear end is a pair of graphite plates. The first of which mounts to the pivot balls on the front of the arms and the second holds the assembly in place to the bulkheads. The cut outs shown here allow you to quickly note how much toe and anti-squat you have set; each notch represents one degree, toe is down below and anti-squat is up top. 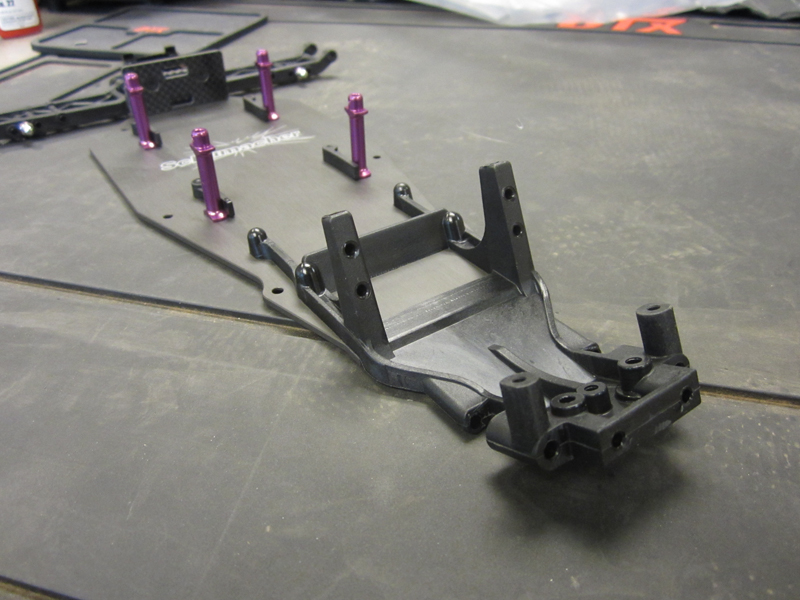 After installing the battery guide and mounts down the center of the chassis, it’s time to start on the front end. The nose of the car is all one molded composite piece that mounts to the front. It will house not only the steering bellcranks but the servo as well. The back of the servo mounting area features an angle piece that helps support the servo so it doesn’t tweak the nose of the car. 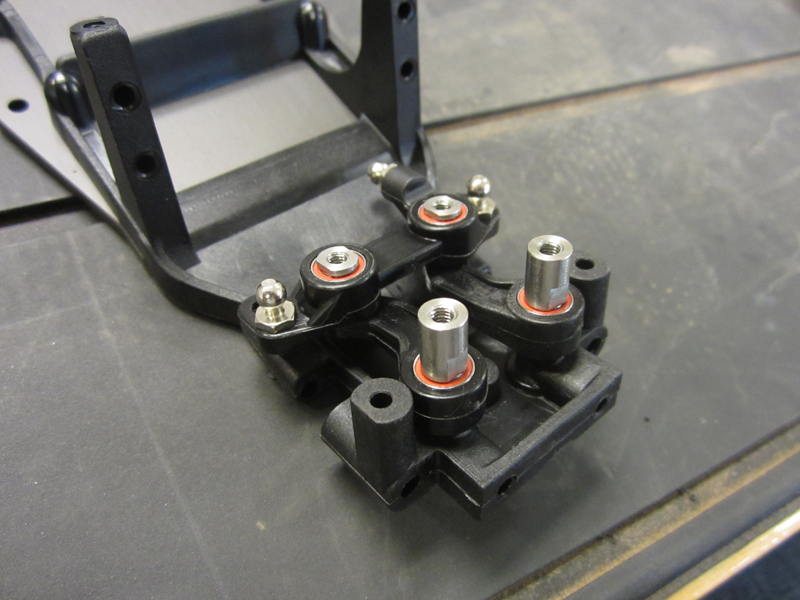 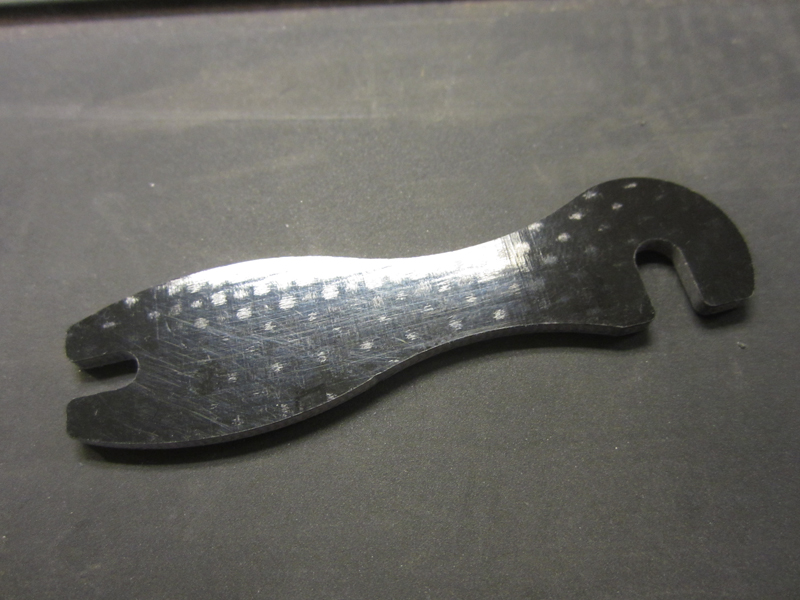 Who else includes a carbon fiber turnbuckle wrench? Nobody love ya more than Schumacher baby! 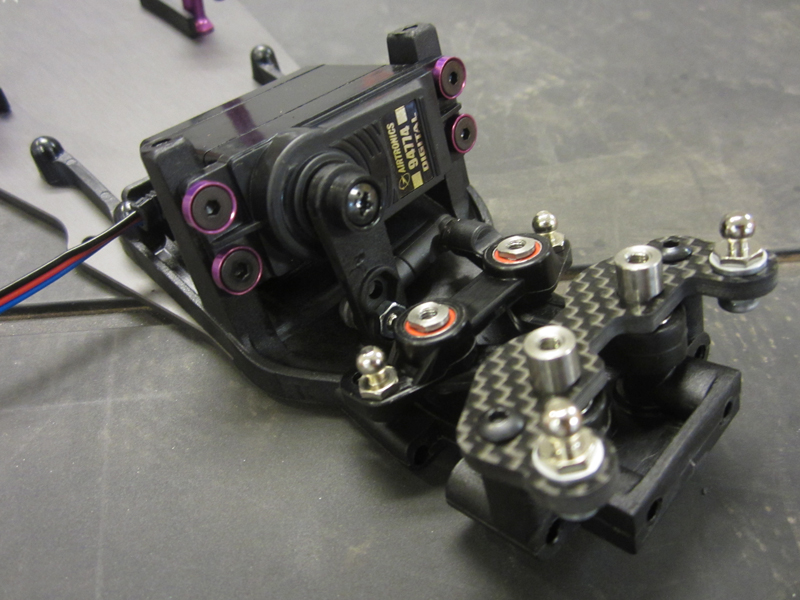 When installing the servo, be sure the bottom/back of it is as close to the rear support as possible if not resting on it. The SVR comes with a full set of shims to get the servo position just right. With the servo in place, the steering side of the front end is complete.

And this is where we’ll wrap Part 1 of the Schumacher Cougar SVR. I have to say so far I’m pretty impressed with how the car has gone together. I’ve built a lot of Schumacher vehicles in my time and the fit and finish on this one is miles ahead of anything I’ve seen before. The pinned bulkheads were an impressive touch and it shows an attention to detail and accuracy that you come to expect from a top notch manufacturer. Check back for Part 2 and until then, go build something!