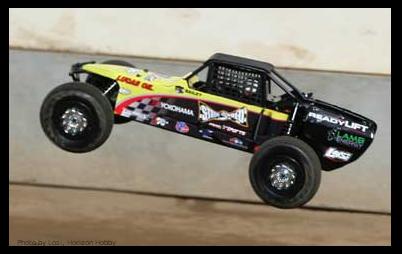 With the short course truck craze having consistent growth and momentum, the newer SCB – short course buggy class is becoming more and more popular before it gets off the ground. The way I look at it is, the SCT kinda replaced the 1/10th scale stadium truck. Now, with the SCB… it’s safe to assume it’s same “type” of feeling of replacement for the 1/10th scale buggies. Was this the “change” we needed for 1/10th scale??

With 1/8th scale having it’s place both in electric and nitro. The Nitro guys are getting gasoline technology in the new year for their current coveted nitro machines (so I have been told). Something had to happen for the 1/10th scale crowd. Since the SCT phase, it was only a matter of time before the SCB group came along. I say group, but I give my hat off to Team Losi for doing this one first. Traxxas may have the Slash to thank for the SCT, but now both Traxxas and the others will have to lay out the drawing board and come up with their own SCB.

Do you plan on getting into the SCB class with or without the current SCT guys??? When, not if.. Traxxas (personal preference) comes out with their SCB you can count me in. What about you??
Will SCB catch on like SCT did???

Tell us what YOU think.