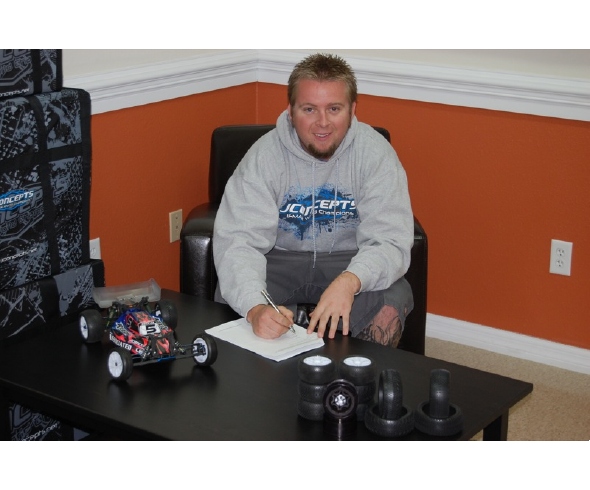 Ryan, known for his speed, radical driving style and flashy looking vehicles have become a staple in the R/C community racing for JConcepts and the Team Associated product group. Earning the coveted Radio Control Car Action 2009 driver of the year award, the speedy driver from Arizona has built a solid racing foundation in all off-road classes.

Ryan Maifield and JConcepts have been a force to be reckoned with since joining forces in early 2004. From the Top Qualifying position at the 2005 1/10th IFMAR Off-Road World Championship with the BJ4 to most recently taking 2 TQ rounds at the 1/8th IFMAR Worlds in Pattaya Thailand, this duo has been one of the most consistent and dynamic pairings on the racing circuit in both 1/10th and 1/8th off-road. Already a 7-time ROAR National Champion, Maifield and JConcepts have won countless titles together and look forward to an even brighter future.

When asked about his extension, Maifield had this to say:

It’s been an amazing ride for me with JConcepts since 2004. I can’t imagine a better relationship for a driver / accessory company than I have with JConcepts. With a complete line of accessories, JConcepts has really stepped up their game and have helped take my racing to the next level. A lot of their products are focused on starting new trends or pushing the limit which is exactly what a racer is looking for. With JConcepts, I feel I have a competitive advantage, for sure.

JConcepts President, Jason Ruona, had this to say about the extension:

“There is no greater thrill in R/C for me than to watch Ryan do what he does best on the race track with JConcepts. Creating products that compliment and stand-up to his style have been a challenge but one that ultimately delivers the best product to the customer and industry. Everyone at JConcepts is excited to continue the relationship with Ryan as we continue living the dream in a sport that has taught us all so much.”