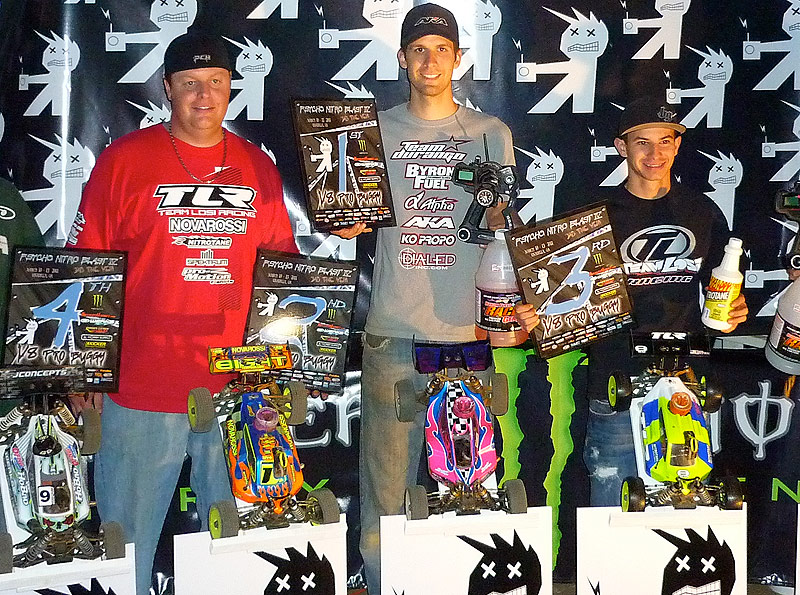 Ryan Lutz reports on the race:

First Qualifier was at 3:30am and I got lucky to do well. My engine was super rich and ran at 180*. I usually run at 240 – 260*. I could barely clear the big triple. However the lack of power seemed to keep me out of trouble and I took TQ for the first round.

Second Qualifier I was on TQ pace again. Unfortunately after my pitstop I think my pit guy got fuel on my pipe and it richened up really bad and around the first corner I flamed out. Took 40 seconds to get the car back to pit lane and fired again. Ended up finishing 4th for the round even with that. Would have took TQ by about 10 seconds.

Third Qualifier was at 3:30am again and I really wanted a victory. I was able to run a solid run even with 2 crashes on the first two laps. The track was brutal but I was able to get a lead and take the TQ for the round and overall. Reno was right behind me in this round! Durango Domination!

Come the A-main time I didn’t even know if I was going to be able to function on the Drivers stand with such a lack of sleep, it was about 10PM. This is such a fun race but it’s so hard especially when I traveled with 3 guys who ran in sportsman and thus I had to be there nearly every day all day. I can honestly say that I had a little luck finally on this day.

As the main got under way my car was as dialed feeling as it had been all week. I had a little early pressure from Kortz, Pettit, and Drake but they fell off and I extended my lead. I worked up to a lap and a half lead by the half way point. Then I crashed upside down and flamed out! I lost 40 seconds but was able to hang on to a 12 second lead! My goal was then to get back in my groove and get a lap on the field again. By the end of the hour long main I was within 1 second of lapping Drake for a lap on the field. So without the flameout I would have won by nearly 2 laps.

My car felt great and I could put it anywhere I wanted to. I was very pleased with the victory and TQ and can’t wait for the next event!