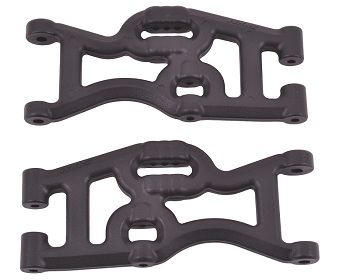 These new a-arms for the Team Durango DESC410R are built to survive the most intense punishment and come back for more. Check out all the info in the official press release below:

RPM engineers reviewed common breakage areas of stock DESC410R A-arms and redesigned our version to eliminate those issues. Hinge pin areas have been massively beefed up to support the relatively small 3mm hinge pins. In certain hinge pin areas, RPM A-arms are over 50% larger than stock A-arms! We’ve also eliminated as much as .004” (.1mm) of slop from some of the hinge pin areas. Stronger, thicker support beams using trapezoidal shapes provide the muscle while our proven blend of top secret materials provides the durability these incredibly fast trucks need.

RPM front A-arms swap the stock front suspension arm bushings from the outside of the A-arm to the inside. The reason is simple – the screws holding the front C-hub on stock A-arms press the bushings into the C-Hub, causing a bind over time. When flipped in the RPM version, the flanged side of the bushing rests between the C-Hub and A-arm (placing metal between two pieces of plastic) accomplishing two goals; It smoothes out suspension movement and prevents the bushing from gouging into the C-Hub.

RPM DESC410R A-arms actually weigh less than stock “v1” A-arms by 1.5 grams each, for a total weight loss of 6 grams or almost a quarter ounce (when using both front and rear A-arms). That number becomes even larger when compared to DESC410R “v2” A-arms.

Whether racing, bashing, or anything in-between, RPM A-arms are your DESC410R solution! 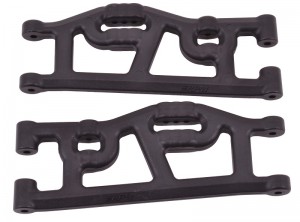 If you like this article, check out this additional article on RPM.