It’s been a long time since I’ve waded in the waters of competitive RC buggy racing. Let’s just say the last time I stood on the driver’s stand in a sanctioned race was when my RC-10 Team Kit was barely a month old. No, I’m not talking about any B6 variant, I’m talking about the original aluminum tub chassis RC-10. Yep, it’s been that long.

Since then, it can be said that Team Associated has done well for itself in the RC competition world is quite the understatement. After securing countless championships over the past few decades, Team Associated and its RC10 legacy has lived on in an entire armada of radio controlled kits ranging from two and four-wheel drive tenth-scale buggies all the way to eighth-scale nitro machines. I dare say that they can even be considered competition royalty at this point. 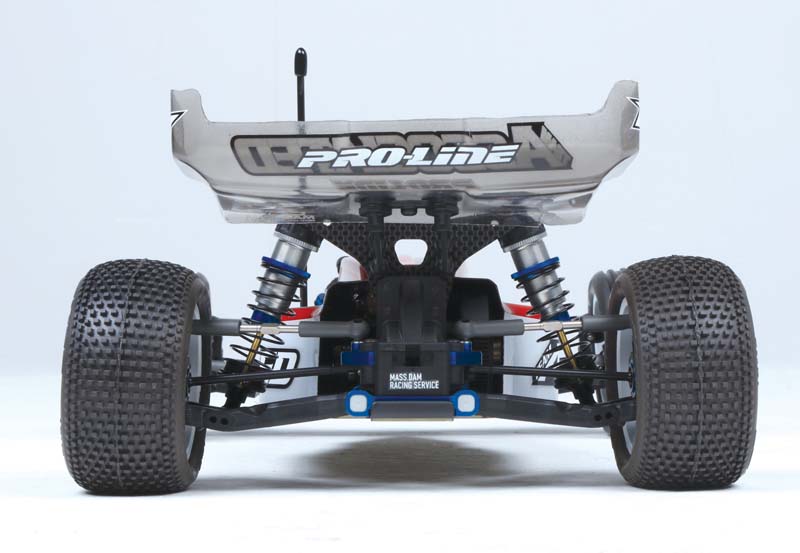 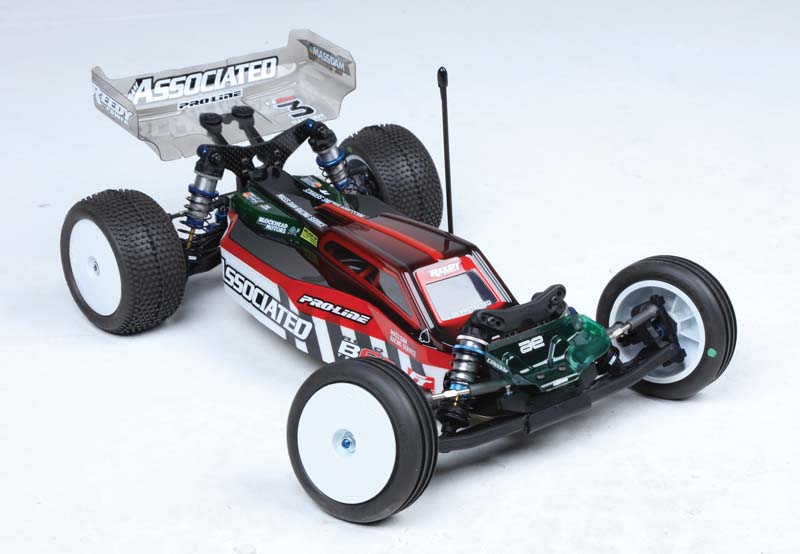 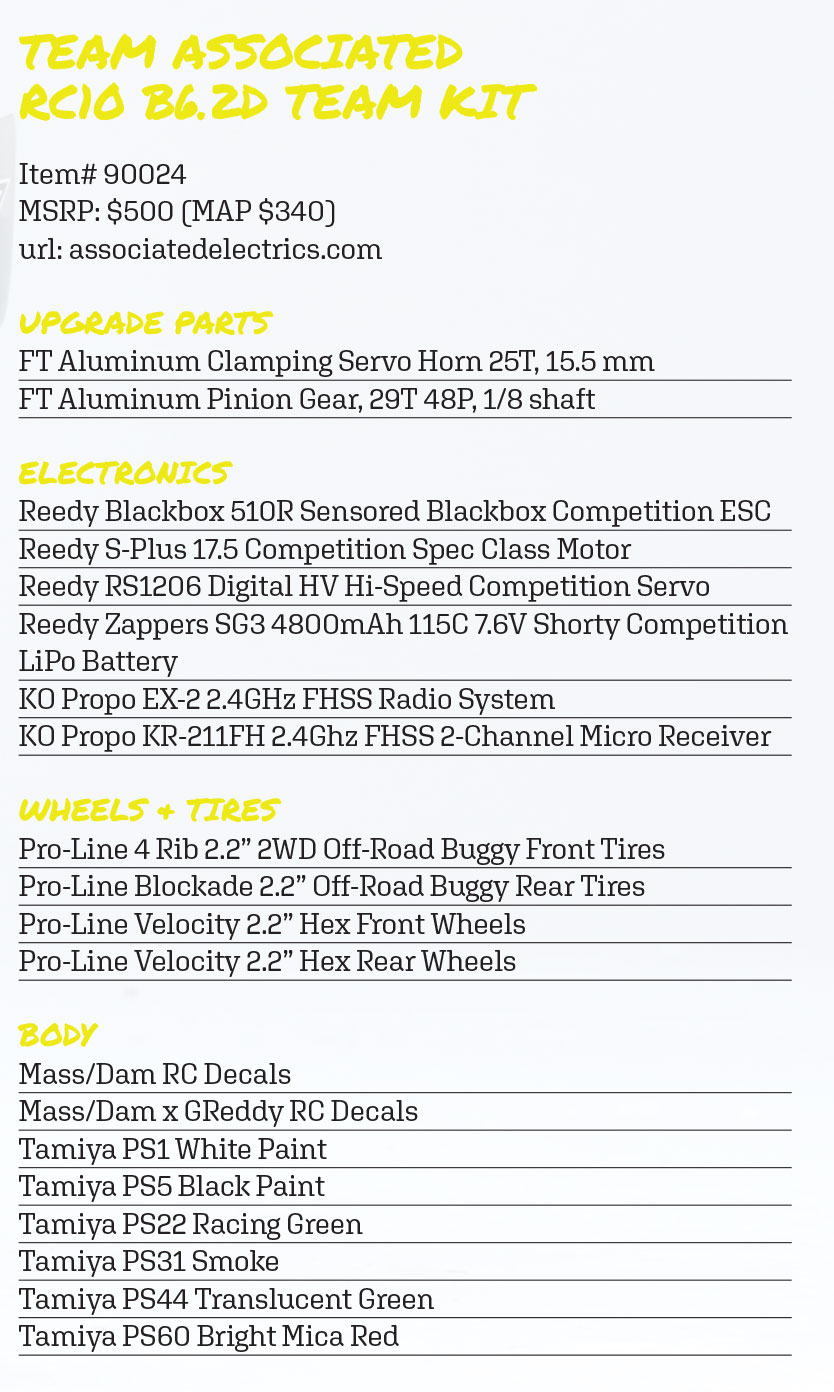 After being away from competitive RC for so long, it can admittedly be intimidating to get back into it. After toying with the idea for a new months, I finally decided to dive head in. After doing some research, it looked obvious to me that the B6.2D Team Kit was the one I needed to start with.

If there’s any type of RC category that Team Associated is known for, it’s got to be tenth-scale two-wheel drive off road. Since 1984, Team Associated has dominated the two-wheel drive buggy class winning 13 of 18 IFMAR World Championships in the process. There’s plenty of confidence that all that experience and expertise goes into the B6.2D kit I was investing in. 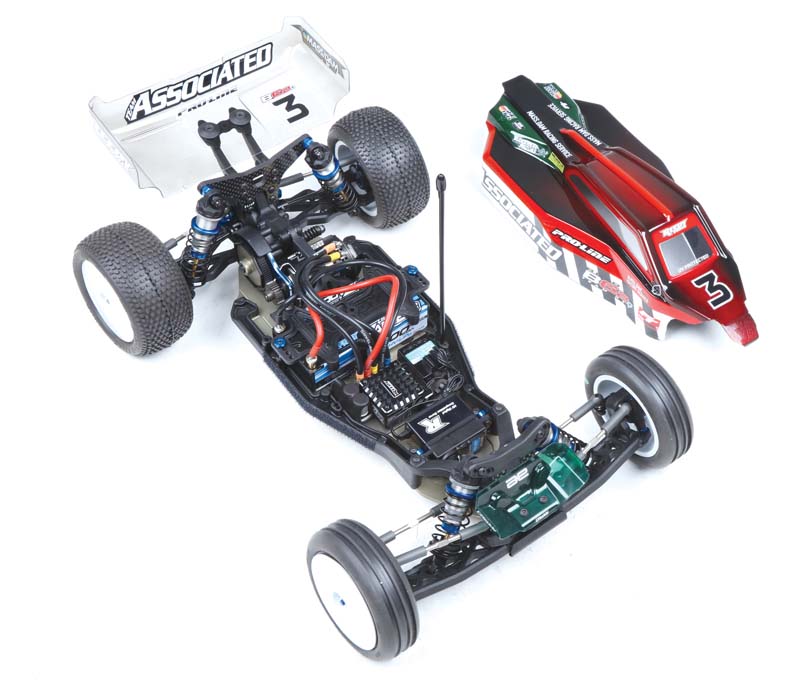 The original B6 buggy introduced the use of two separate chassis configurations for better tuning for track layout and course surfaces. The latest iteration, the updated B6.2D, continues this attribute as it includes both Layback and Laydown transmission assemblies. The two different transmission configurations allow the user to fine tune mass balance to track conditions. If you’re running on high traction turf or racing on loose dirt, the B6.2D can be tuned for both of these drastically different types of terrain. We’ll get back to this in a moment.

The B6.2D’s addition of +1 Ackermann plates and its legacy gull wing suspension arms also allow the steering feel and control to be tuned. Also new to the B6.2D are symmetrical rear arms that can be flipped to allow an in-between rear shock mounting position. The swapping of shock absorber positioning can help the racer with further fine-tuning for driving feel and vehicle stability.

Other stand out features of the B6.2D includes an easy-access differential for quick trackside tuning and maintenance. To enhance durability, the outer rear hinge pins are now captured with bolt heads and locknuts. A new slipper assembly is also included as a part of the updated kit.

For many racers, it’s the B6.2D’s inclusion of both transmission layouts that makes this kit stand out. Choose the Laydown gearbox when you require high grip conditions such as on high grip carpet or turf track surfaces when on-power steering and stability are paramount. The Laydown arrangement allows the buggy to change directions the quickest and create more steering when needed. For other conditions where mass should be shifted rearward, such as on indoor clay surfaces, the Layback transmission type is more suitable. Owners of the B6.2D have the option of both.

For those who are curious, the differences between a B6.2 kit and B6.2D are as follows. The B6.2 has a 3mm longer chassis, only comes with the Laydown gearbox, and has a gear differential among other differences. The B6.2D on the other hand, features a shorter B6.1 length chassis, comes with both Laydown and Layback gearboxes, as well as a ball differential.

Not having built a Team Associated kit in decades, I was excited to tackle the job. There’s no mistaking that this buggy means all business. The B6.2D does not come with many items that we are accustomed to buying separately such as the battery, servo, ESC and motor. But what one may not realize is that the B6.2D also does not come with wheels, tires or even a pinion gear. Those are all items that you need to buy separately, and for good reason. Depending on which track you run on, the requirements for those items will vary. Team Associated skipped including them since this is a pure competition kit.

When accessorizing the B6.2D, I chose to go as Team Associated brand loyal as I could. Figuring that their winning tradition spread throughout all their products made it a no-brainer for me to choose electronics by Reedy Power, Team Associated’s in-house brand of electronics. First up, I opted to install a Reedy Blackbox 510R Sensored Brushless ESC along with a Reedy S-Plus 17.5 Competition Spec Class Motor.

Reedy’s Blackbox 510R Competition ESC was developed with the help of extensive race testing by Reedy’s engineering and racing team. Their efforts have resulted in a high performance and reliable ESC suitable for competition. Boasting excellent throttle and brake feel and a wide range of precision adjustability, the Blackbox features durable hardware and even comes with a Blackbox PROgrammer2.

The Blackbox PROgrammer2 device plugs into the ESC to act as a programmer and also operates as a battery monitor and USB firmware update device. The 510R ESC includes two modes that can be modified and saved independently from one another. Standard mode for those who want to keep thing simple like myself and another mode for more experienced racers that can take advantage of advanced settings.

The 17.5-turn Reedy S-Plus Competition Spec Class motor that motivates the B6.2D features a thin leg stator that allows shorter wire lengths. This results in a reduction in resistance that hovers just above the minimum allowed by ROAR. An updated motor design reduces overall motor weight as well. What this means is that the S-Plus is Reedy’s most powerful and lightest spec motor to date.

Controlling the B6.2D is my trusty KO Propo EX-2 radio that communicates with a KO Propo KR-211FH receiver. A Reedy RS1206 Digital HV Hi-Speed Competition Servo controls the buggy’s steering. Reedy’s servo features metal gears for added strength and smooth operation, and a microprocessor that improves vehicle control and on-track performance. To get the most out of the servo, I opted to upgrade from the plastic servo horn that comes with the B6.2D for an FT Aluminum Clamping Servo Horn. It’s actually the only upgrade I got for the kit as the rest of it looked ready to go as is.

Powering the off road racer is a Reedy Zappers SG3 Shorty Competition LiPo battery. The battery is new for 2020 and features chemistry with an emphasis on lower internal resistance with improved durability and cycle-life. That means more power, improved durability, and high capacity. The battery also fits perfectly in the B6.2D’s battery box. How’s that for a no-headache solution?

When it comes to wheels and tires, I didn’t have to search far and wide. Pro-Line is the obvious choice for sure. For the front, I fitted 4 Rib 2.2” 2WD Off-Road Buggy Front Tires to Pro-Line Velocity 2.2” Hex Front Wheels. In the rear, I have a set of Pro-Line Blockade 2.2” Off-Road Buggy Rear Tires mounted to Pro-Line Velocity 2.2” Hex Rear Wheels. This is the perfect set for my local track. 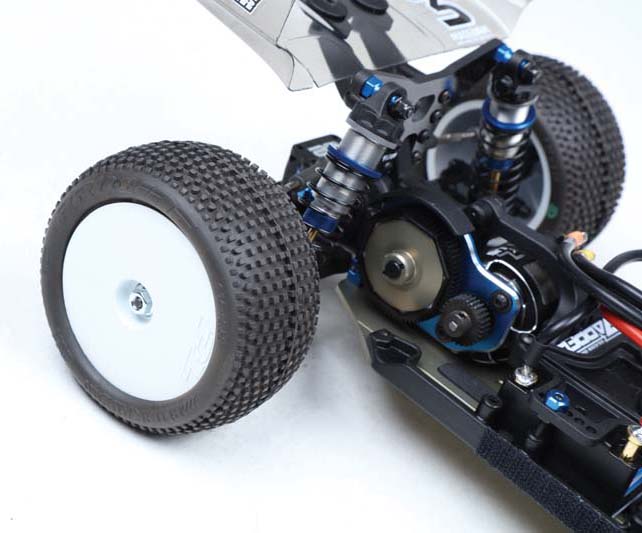 A Pro-Line wheel and tire package gives this buggy the traction it needs to race around the track. 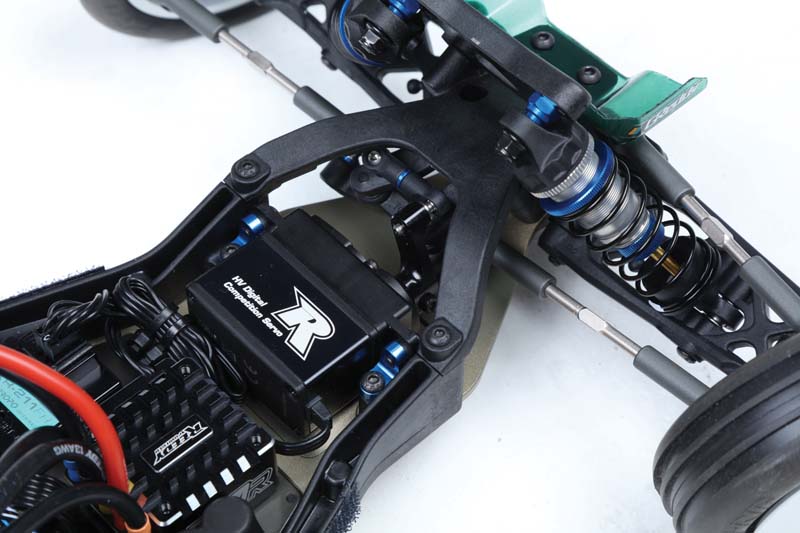 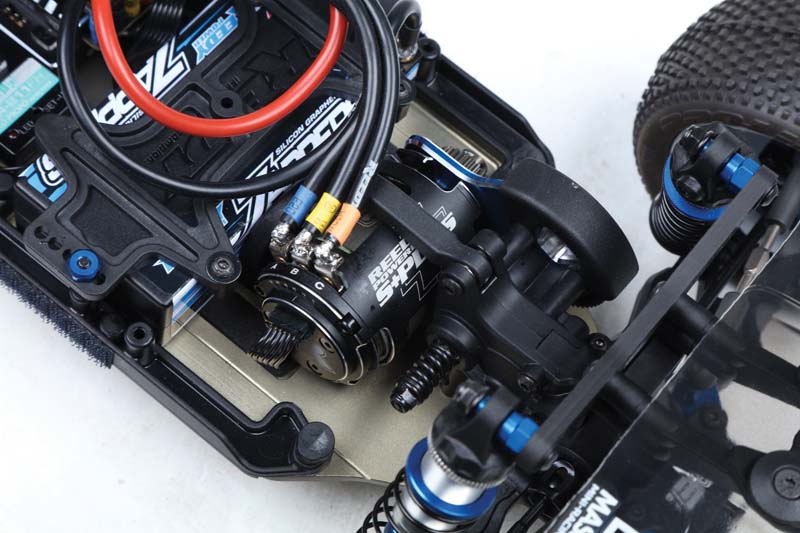 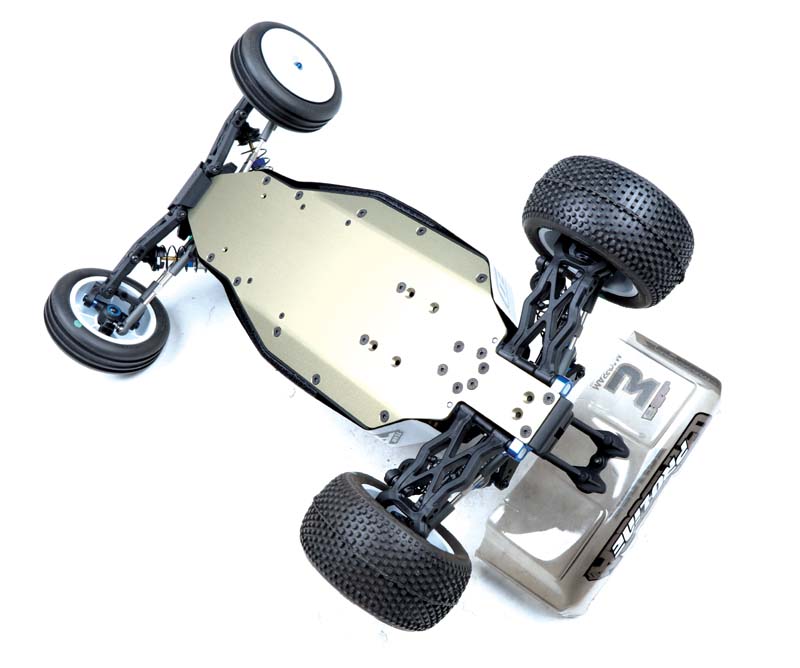 Here’s a look at the beautiful anodized aluminum chassis before a protecive sheet was placed on it. 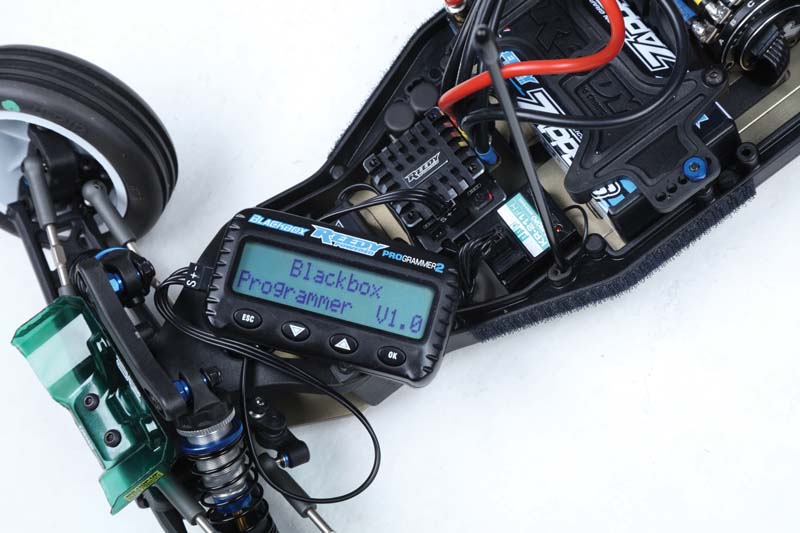 he Reedy 510R ESC’s Blackbox PROgrammer2 device plugs into the ESC to act as a programmer and also operates as a battery monitor and USB firmware update device.

The build of the B6.2D was relatively problem free. I say relatively due to a few inconsistencies I found in the instruction manual. Also, I do wish some of the diagrams were clearer on which screws when into which holes, as it isn’t immediately obvious in some of the steps. A truly fantastic thing about the manual however are the Tuning Tips found in the back. It provides plenty of valuable reference material for the build.

I was able to get the kit built and running in about five to six hours. (That includes a few ice cream brakes.) I ended up building the kit mainly to factory specs although I decided to go with the Laydown transmission option for now. I will take a look at some setup sheets on petitrc.com after I’ve gotten some trigger time with the buggy. If you’re looking to set up your B6-series buggy, I recommend looking at that website. It’s got plenty of informative setup sheets from racers from all over.

Aside from both transmissions, the kit also comes with two spur gears, a 78T and a 72T. Because I’m running a 17T motor, I went with the recommended combination of the 72T spur and paired it with an FT 29T pinion gear. Overall, parts fit and finish throughout the kit was superb. I finished off the build by painting the body with a selection of Tamiya spray paints and sticker tuned it with the Team Associated decal sheet it came with along with some choice decals from RC decal maker Mass/Dam.

After I got the kit put together, I headed over to an indoor track to dial the B6.2D in. Spending most of my time driving bashers in the park, this was a totally different experience. There’s no doubt that a proper track specifically designed for RC cars is really fun to drive at. The B6.2D was really quick just about everywhere. In the turns, down the straights, I found myself feathering the throttle to temper the buggy’s impressive speed. The car feels quick, light and definitely competitive.

After about five minutes on the driver’s stand, I realized that I needed a lot of driving practice if I were going to simply dial in the vehicle let alone race with it. With so many settings and options, where do I start? Suspension geometry, ESC settings, transmission layout… it was starting to feel a bit overwhelming. That’s the great thing about the RC hobby. There were plenty of fellow drivers willing to help this old timer out. I spent another hour or so at the track just fiddling with the car and having fun on the track. I’m definitely looking forward to my next trip back. 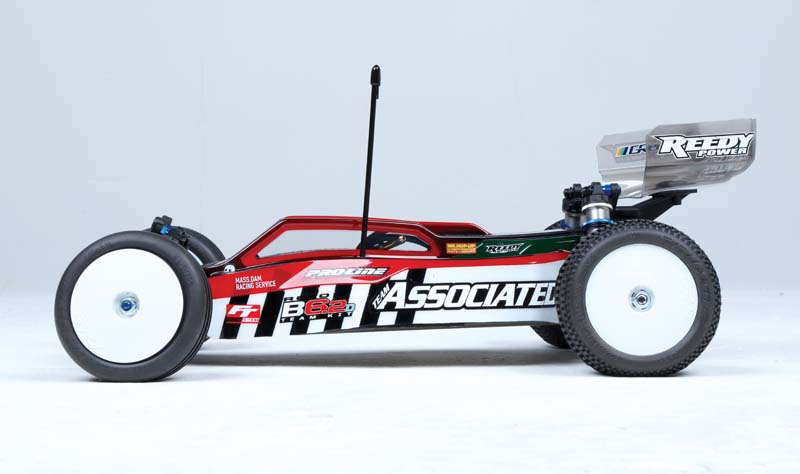 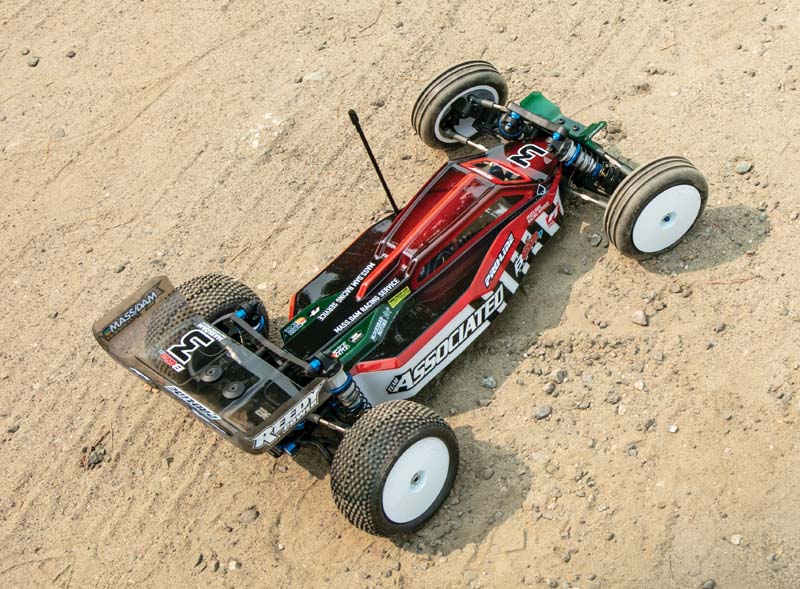 I’ve come to realize that not only driving the B6.2D is fun, but learning how to set it up for the track was too. With so much competition history coursing through its veins, it’s hard not to think you’re the best driver on the track when at its controls – and perhaps in the presence of RC racing royalty. In contrast to brutish bashers that I have in my collection, the B6.2D feels like an elegant, precision instrument. What I do know is that the B6.2D gives me the best chance of placing in a race; the rest is up to my skill as a driver and tuner. That’s all I can ask for.

Text and Photos by Jerry Tsai