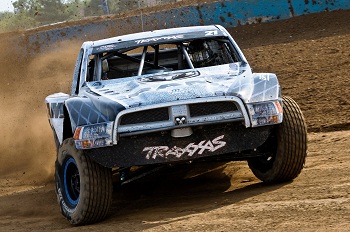 The final day of competition the annual Forest County Brush Run at Crandon International Off-Road Raceway, round six of the 2012 Traxxas TORC Series, presented by AMSOIL, ran pretty much from sun up to sun down – providing a number of surprises and interesting twists to the TORC Series season. But above all it was, as it always is, a spectacular day of racing for the thousands of fans that flock to Crandon’s first of two big summer off-road races.

Partially rained out on Saturday, to which the PRO 4×4 and PRO 2 contests will be made up on the Friday prior to Labor Day’s World Championships at Crandon, fans attending Sunday’s action saw a full day’s worth of racing action from both the Midwest Off-Road Racing’s Sportsman members, the TORC PRO class drivers and, new to Crandon, the Ultra 4 “King of the Hammers” vehicles.

With a bunch of pent-up aggression thanks to Saturday’s rain/mud-oriented postponement of the TORC Series PRO 4 main at Crandon, fans knew Sunday’s race would be a banger.

Charging out to the early lead was Red Bull/Ram/Mopar/KMC Wheels’ Ricky Johnson, the defending TORC PRO 4 champ. Johnson led Mike Jenkins (Traxxas/AMSOIL/BFG/Ford) and Crandon legend Johnny Greaves (Monster Energy/Maxxis/Toyota) into the first turn, with Adrian Cenni (RealTree Energy) and Mark Jenkins (Traxxas/AMSOIL/BFG/Ford) in hot pursuit. Curiously, though, Scott Douglas (AMSOIL/Borla Exhaust/BFG) would be nowhere to be found as he mis-timed the start and came down the Land Rush shoot in dead last.

But that would change as Douglas had brought a hyper-fast motor to Crandon and the veteran started picking off drivers left and right.

With Johnson and Greaves soon separating themselves from the rest of the pack, the two first came together on the corner before the starting line – with Greaves getting pushed up into the loam-covered concrete wall as Johnson would not relinquish his lead. About a half lap later Johnson would make a mistake and Greaves would jump all over him, taking the lead from Johnson – who went high in the corner heading into the Land Rush start straight – and barreling off towards the competition yellow. But a beautiful inside/out drifting power slide in front of the most crowded section of the 15K-plus audience by Johnson would send a warning blow across Greaves bow – though the Wisconsin native wouldn’t flinch – just yet.

Moments later Greaves spun and, in trying to right himself back on course, collected Johnson and the two came to a complete stop by the Oakley Island. The situation would damage Greaves’ truck, possibly knocking out the front wheel drive train. Johnson, who’s truck was at this point at least cosmetically jacked up, would take full advantage of this and regained the lead. But during the fracas Douglas, forever charging, had move all the way up from last to 2nd.

With five seconds on Douglas at the white flag, Johnson looked to have things in the bag. But a mechanical gremlin would rear up and render Johnson’s Ram Truck lame, then eventually completely broken and stopped. Douglas was right there to pounce on the lead, and did deservingly so – joined on either side of the 1st place podium spot by Mark Jenkins (2nd) and Cenni (3rd).

In what ended up being the longest, time-wise, PRO 2 race in the history (1 hour, 45 minutes and 23 seconds) of the TORC Series, local racer Jeff Kincaid (Traxxas/BFG) caught veteran great Scott Taylor (Miller Electric Welders) late in the contest and held on for a thrilling victory in the twice red flagged contest.

“I had two holeshots, spun out and was able to work my way back,” said Kincaid, who grew up right here in Crandon Wis. “Our new truck ran great. Scott (Taylor) did a great job. I’m proud to be here and it’s good to be back in the winner’s circle.”

On the start of Sunday’s PRO 2 main Steve Barlow (RealTree Energy) and Andy Zipperer (Loctite/Warn Wenches) got together at the worst possible section of the track – the top of Turn One at the pinnacle of the Land Rush start. Slamming through the fence Zipperer went airborne and landed in a gully. Barlow’s crash, though not as spectacular, rendered his truck just as wrecked at Zipperer’s. Fortunately both drivers would walk away, thank equally to TORC’s stringent safety rules and the efforts of Crandon’s veteran safety crew.

After nearly an hour wait while the Crandon track crew fixed the concrete barrier that was blown out, the green flag dropped again with Taylor, Chad Hord (BOSS Snowplows/AMSOIL/Nissan) and Kincaid leading the pack. The second-tier of racers would include CJ Greaves (Monster Energy/Maxxis/Toyota) in 4th place and last year’s TORC PRO 2 champion, Bryce Menzies (Red Bull/Ram/Mopar/KMC Wheels), moving up fast to 5th.

Sunday’s second red flag in the PRO 2 race came when Nick Tyree got loose on the Argon Turn, got airborne over some concrete blocks, and was struck – while in the air – by Keith Steele. Again Crandon safety crews had again extract a driver (reportedly Tyree) and, again, the two drivers were said to be OK.

On the second restart, this time in single file, Taylor, Kincaid and Hord separated themselves from the rest of the field. Chasing CJ Greaves hard was Menzies – who ended up breaking in the process and failed to finish Sunday’s PRO 2 contest, similar to what happened to defending PRO Lights champ Andrew Caddell on Saturday.

In the closing laps a bit of smoke shot out the end of Miller’s truck, though it didn’t seem like he was down on power at all. Kincaid would dog Taylor relentlessly and, ultimately, set the Hall of Fame driver up with an inside/outside pass on the finish line turn and bolted to the victory. Taylor would hold on for 2nd and TORC PRO 2 points leader Hord was 3rd, extending his points lead.

“I’m rusty from missing the first two rounds, but glad to be on the podium and see Jeff up here along with my other buddy (Hord),” said Taylor.

TORC Super Buggy drivers Andy Zipperer (Loctite) and Scott Schwalbe (Sugar Camp Racing), both from the Great State of Wisconsin, provided the best finish of all the PRO classes on the final day at Crandon as Zipperer – literally – got out of an ambulance, strapped into his Super Buggy and railed the outside of the last turn on the last lap to steal 2nd place at the wire from Schwalbe.

It didn’t matter to the 15K diehards still in attendance that Traxxas’ wonder kid Mitchell DeJong, 14, had crossed the finish line about 15 seconds before Zipperer and Schwalbe got there. The fans saw both a great finish – and a racing clinic – in one contest!

“I got in behind 2nd (Schwalbe) and just took my time,” explained DeJong. “Track was a little slick, blue grooved and wet. But yeah, it was a good race. Feels great to win in the Big House!”

DeJong absolutely dominated the contest, racking up leads of 17 seconds and 15 seconds at the competition yellow and finish. About the only lead other than DeJong was Schwalbe’s run at the start, pulling the holeshot and running 1st through Crandon’s big left hand sweeper at the Barn. DeJong would ‘rassle the lead back from Schwalbe – enough to lead by four seconds at the end of lap two.

But the late race battle for 2nd and 3rd would have the fans on their feet at Crandon as Zipperer took a big chance and ended up with the pass of the day, smacking front wheels with Schwalbe as they crossed the finish line.

“The chance was there, I took it, went wide and it hooked up … worked,” said Zipperer.

Added Schwalbe: “Last corner, picked the inside line and held tight, he (Zipperer) went wide. A lot of times that doesn’t work, but it worked for him. Andy ran a great race.”

A new rivalry broke wide open in the PRO Light class as CJ Greaves (Monster Energy/Maxxis/Toyota) and Andrew Caddell (Ram/Mopar/Traxxas) took their battle for the race lead to the podium, with some choice words from Caddell for Greaves after CJ alluded to Caddell’s sponsors being the reason Greaves was docked a spot for jumping the start green.

Said Caddell: “Don’t know what he (CJ Greaves) is mad at me for … but if he wants to come up here on the podium and play games I’ll put it on him again at Chicago!”

The line drawn in the sand notwithstanding, the two all-star PRO Light driver put on a dominant show at Crandon, separating themselves from the rest of the field and running within a couple truck lengths from the competition yellow restart through the checkers. Prior to the competition yellow Greaves had the lead – or so he thought. TORC/USAC race officials deemed that CJ had jumped the green flag at the start and docked him one spot. This put Caddell, who was run into early in the race and suffered some rear quarter body damage, into 1st place from 2nd.

Matt Cook (Supercross.com) had run well early on in the race and was into podium position (3rd) following the competition yellow restart. But Raphael Navarro (BOSS Snowplows/AMSOIL/Nissan) and Keegan Kincaid (Traxxas/AMSOIL/BFG) were all over Cook, relegating him back to 5th in a battle for the final podium spot.

Saturday’s PRO Light winner, Brad Lovell (AMSOIL/Torchmate/Nissan/BFG), wrecked early in the race and, along with Cook, had to deal with bodywork obstructing his view as he charged from last place into the top five.

At the white flag Caddell led CJ Greaves by only a couple car lengths – and was able to keep that distance through to the checkers as Greaves couldn’t even get quite close enough to even nudge Caddell. Kincaid would win the battle for 3rd – though one last (verbal) battle on the podium would ensue between Caddell and CJ Greaves – setting the stage for a grudge match in Chicago!

Ultra 4 racer Gary Ferravanti (Paso Robles, Calif.) made it two wins in a row at Crandon as he thoroughly dominated the rock racer action on Sunday. Pulling the holeshot and leading early, Ferravanti ran pretty much uncontested for the eight-lap main event.

“The track was a lot better today. The guys here at Crandon did a great job. And thanks to Dave Cole,” said Ferravanti. “The track was perfect near the end. Thanks for everyone that helped out.”

Keeping things at least somewhat close early on was Vegas’ Nick Nelson, who placed 2nd in yesterday’s inaugural Ultra 4 race at Crandon. But Nelson would eventually run into some mechanical issue and was unable to keep the podium pace on Sunday. Jumping on the opportunity JT Taylor, who held off a hard-charging Roger Lovell in a close 3rd place podium finish. 2nd place would go to 16-year-old Thomas Grady.

“I just drove it as far as that little car could run,” said Taylor. “It’s pretty awesome being here at Crandon.”

Added Grady: “I’m excited. This was a lot of fun. The track was perfect near the end. Thanks for everyone that helped out.”

Up next … Action on the Traxxas TORC Series, presented by AMSOIL, picks back up July 19-20 at Chicagoland Speedway.