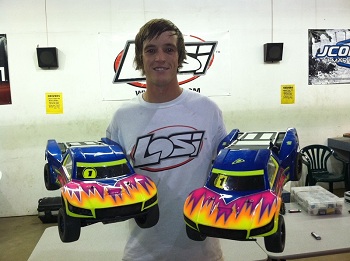 Led by Dustin Evans, Team Losi Racing wins in Mod 2WD SC, 4WD SC, and Stock 2WD SC at the fourth and final round of the 2011 Short Course Showdown Nationwide Tour.  Read the full race report by TLR below:

At the fourth and final event of the Short Course Showdown series hosted by Mikes Hobby Shop in Dallas, Texas, it was Losi’s Dustin Evans who flat out dominated the event with his Orion powered Losi XXX-SCT and Ten SCT-E.

Beginning with the Modified Short Course Class, Dustin was the only driver to complete 16 laps in qualifying for the Top Qualifying honors. Dustin backed up qualifying by winning the class with a 13 second margin over 2nd place.

Continuing his domination of the Short Course Showdown, Dustin used his Losi Ten SCT-E to TQ the 4wd Modified Class. He and Losi team mate Quincy Hughes, were the only drivers to complete 17 laps in qualifying. In fact, 7 of the top 10 drivers chose the Losi TEN SCT-E as their vehicle of choice. In the Main, Dustin used his TQ position to lead from end to end with team mates Josh Glancy and Quincy finishing in 2nd and 3rd for a complete Losi podium.

In the Stock Class, it was privateer Brent Burns using his Losi SCT to take the win in a battle that came down to the last turn and a drag race to the finish line.

Congratulations to Dustin and Brent for the awesome drives and completing a clean sweep for Losi.