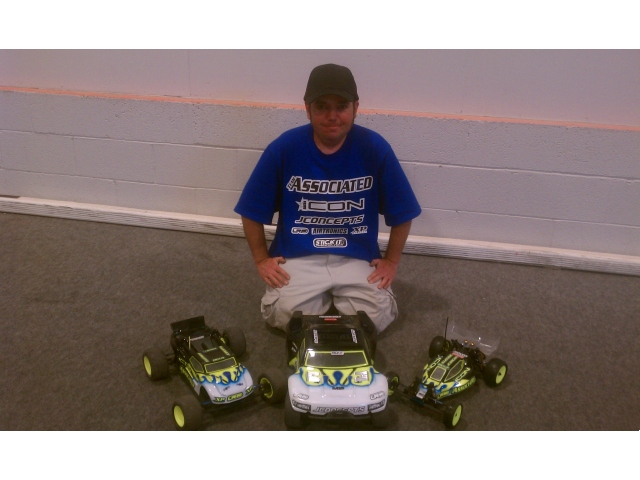 The 2nd leg of the Battle in the Desert Series took place at Competition Hobbies in Tucson, AZ. Brian Kinwald was on fire at his home track and was the driver to beat all weekend. Starting with a TQ in 2wd modified and Short Course 4×4, Kinwald put the rest of the racers on notice, to get the win you had to go through BK.

The main events got underway and BK picked up right where he left off in the 2wd modified class. His perfectly prepared B4.1 with JConcepts Blue Bar Codes proved to be too much for the rest of the field as BK ran away with the main. Topping off the winning ride was Punisher body and 6.5” rear wing.

Modified truck would be much more difficult. Staring in the back of the pack because of qualifying breakage, BK had his work cut out for him. Again, with his usual driving savvy, BK moved quickly to the front of the pack and took his 2nd well deserved win of the day. Brian’s winning T4.1 was covered with Punisher body and hooked to the track with Bar Codes in blue compound.

Trying to complete the sweep for the day, BK was prepared and ready for the Short Course 4×4 A-main. BK was on rails with his SC10 4×4 and has the truck working better than ever. Brian negotiated Short Course traffic with ease and dropped the hammer on his fresh 4×4 and crossed the finish for a modified sweep result. The “Dirtinator” has the SC10 4×4 covered with JConcepts Raptor body, Rulux 12mm Hex wheels and Bar Codes tires in green compound.

A special thanks to Competition Hobbies and all members involved with the Battle in the Desert Series.