I’ve wanted to enter the world of RC crawlers for a while now, but with so many options out there, it’s been hard to choose where to start. While the starting point alone was a hard decision, how the build would look in the end was equally as challenging for myself. It had to be realistic, themed around something meaningful to myself, and topped off with some first-rate paint. Considering all these factors, I was led towards a theme build based on the movie, Jurassic Park.

Growing up, Jurassic Park has been a big part of my life. Who doesn’t love dinosaurs, especially as a kid? Add some science fiction and a few Jeep Wranglers and you have yourself a great movie! And that leads us to my Traxxas TRX-4 build. She started off as a stock ready to run (RTR) Land Rover Defender model, but that didn’t last long. Traxxas has always held a special spot in my heart since they were the company I started my RC hobby with. Their TRX-4 looked promising! 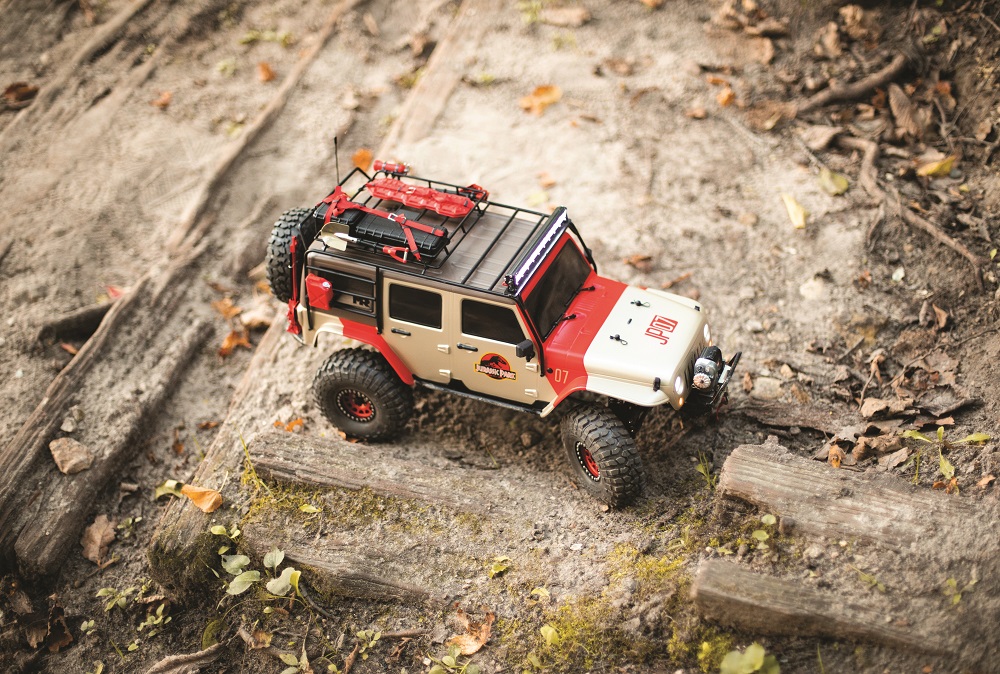 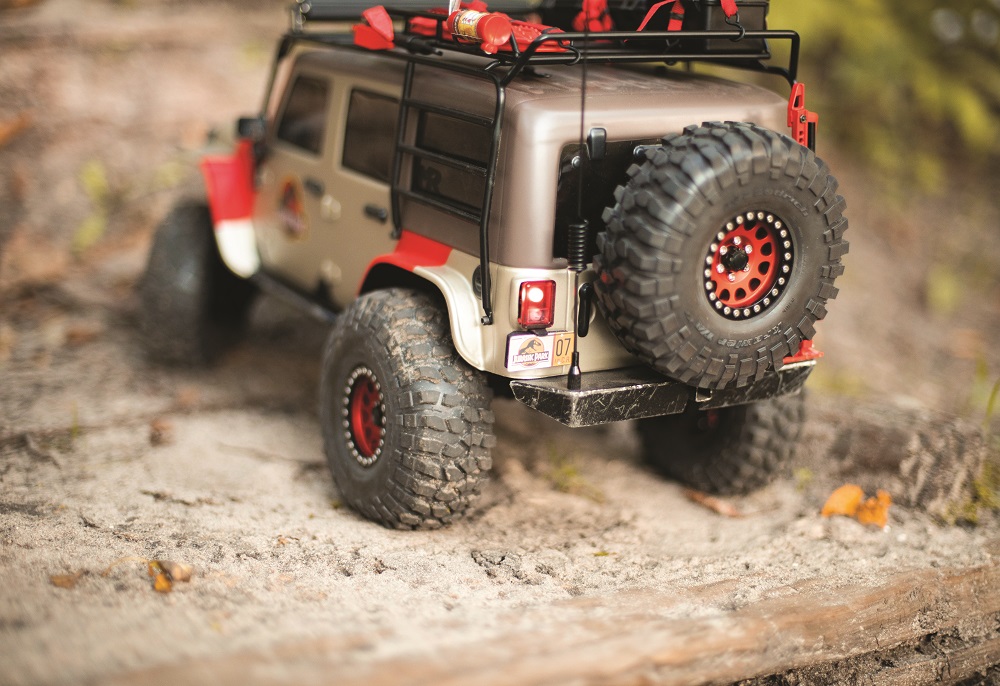 First up was a motor and speed control that would offer some more low speed torque. I reached out to Hobbywing to see what they suggested. Since I’d be racing from T-Rex’s, they highly recommended their 3300 AXE motor/ESC combo. Where slow and torquey is usually the name of the game, this combo is incredible.

On the downhill slides, its drag brake is equally as impressive. It locks those wheels whenever you release the throttle. Installation was a breeze in the TRX-4; I unbolted the stock Traxxas system and the new one bolted right up. I then soldered the three motor leads to the ESC and then a quick program through the Hobbywing phone app and I was ready to hit the trails. Speaking of trails, if a bit of higher speed is your thing; the 3300KV system definitely has you covered as well. A few drag races with some other crawlers left the competition in the dust.

Next up were the servos. I needed something that wouldn’t let me down when the dinos were after me. I contacted Reef’s RC for their suggestions. For steering duties they told me their Raw 500 servo is what I needed. It’s unstoppable, whenever I needed the wheels to turn, and in whichever direction, it was up to the task. It is a bit of an eye catcher too with its raw aluminum appearance. For the transmission shifting servos, they sent out three 99 Micro servos. Although they are small in appearance, they are crazy powerful and fast to boot. The only issue with them is that they won’t bolt up to the stock shifting servo mounts. This is where DSM Off-Road comes to the rescue. They sent out their brand new servo mounts meant for this exact situation. It was a super quick install once I had all the pieces there, a bit of end point adjustment on my radio and I was good to go.

I went with MaxAmps for the batteries. Knowing they did custom wraps for their crazy powerful batteries, I knew that was the correct choice for me, I talked to them about what I was after and they suggested their 4750mAh shorty LiPo. I had it wrapped up in a Barbasol design to tie it into the Jurassic Park build. Every detail matters with a custom build, and they nailed it.

After the required electronics were settled, it was onto the customization of the chassis, my favorite part. Pro-Line offers a killer Jeep Wrangler body that drops right onto the longer wheelbase chassis of the TRX-4. Once that arrived I ordered up some 3D printed parts from Knight Customs. They offer an amazing selection of parts for various RC vehicles and bodies. Once those parts hit my workbench, the Dremel was let loose to modify the body so all the extra parts would fit. Custom light buckets all around, license plate bracket, rear tire mount, mirrors, hood latches, the list was long. Quality of the prints was top notch though.

I’ve been painting RC bodies for over 20 years now, I’ve done quite a few custom requests in that time, but no Jurassic Park Jeep Wranglers… it’s time had finally come. I sprayed the main color of the Jeep in actual automotive paints using the paint code from the Jeeps used in the original film. You cannot get closer to the real thing than this one color wise! All of the graphics were hand cut in Spraylat liquid masking and I used my trusty Iwata HP-CS airbrush to lay down the paint. Once that job was complete, I sprayed a flat clear on the outside to complete the movie accurate paint job.
One thing was missing though, the mirrors were currently left black without any details. My initial thought was to use some chrome tape, but that’s not enough for this build. I reached for my paintbrushes and painted the reflection of a T-Rex on them instead. Now, the paint is finally complete. 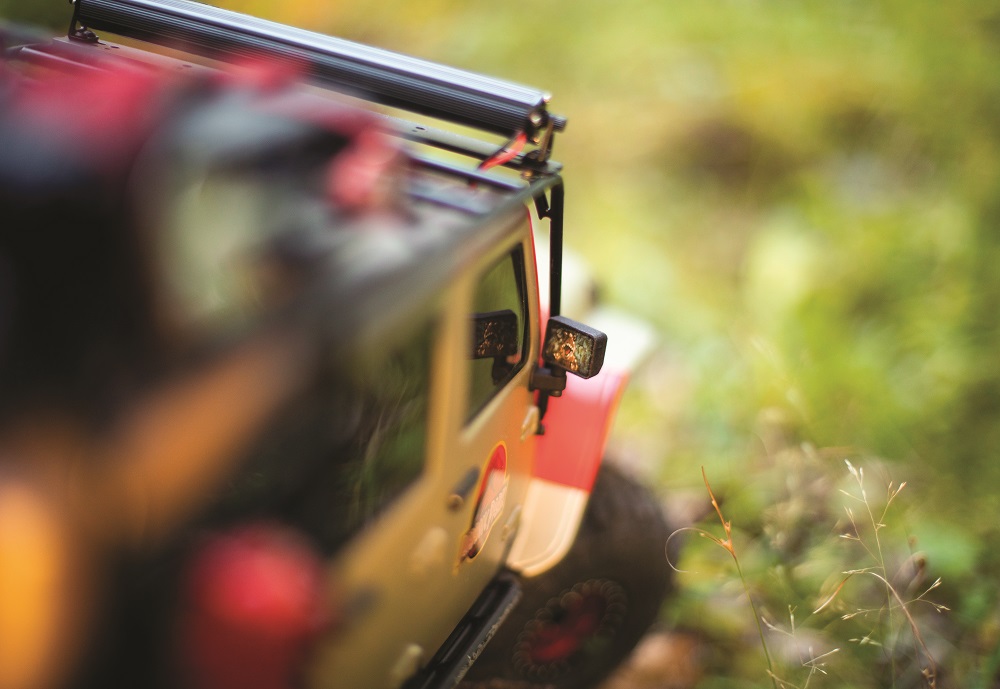 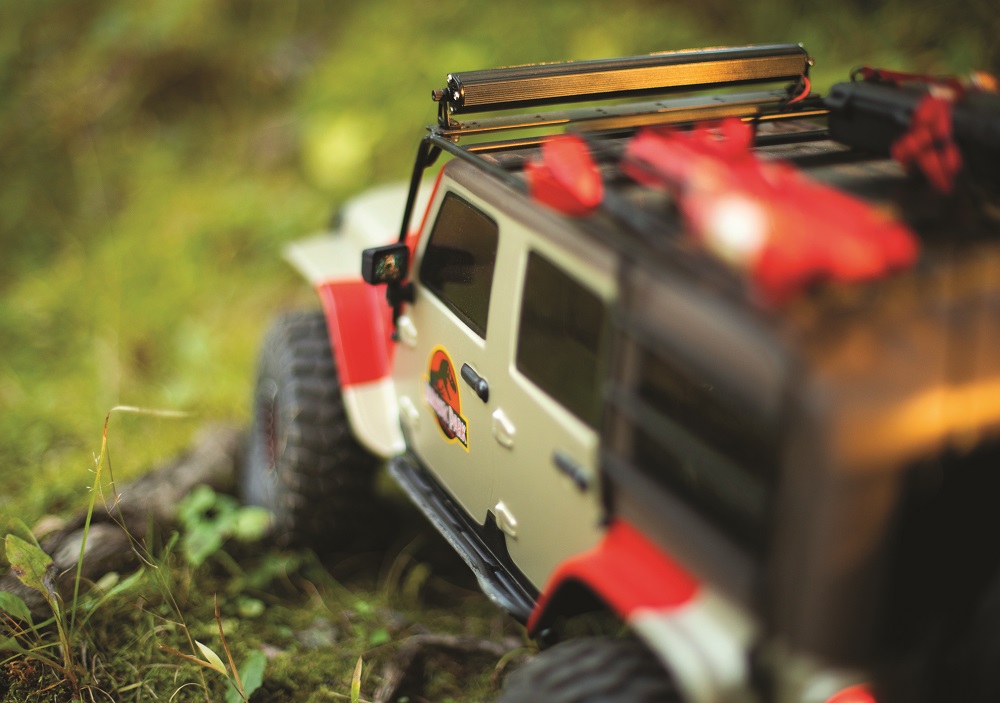 Once the roll cage was installed, I realized that it needed various items one would need at Jurassic Park. A fuel can, recovery mats, a gun case or two. Those raptors are nasty you know! I contacted The Strap Factory on Facebook for some realistic scale tie down straps to keep everything in place. A few other items purchased from eBay to finish off the top of the Jeep. 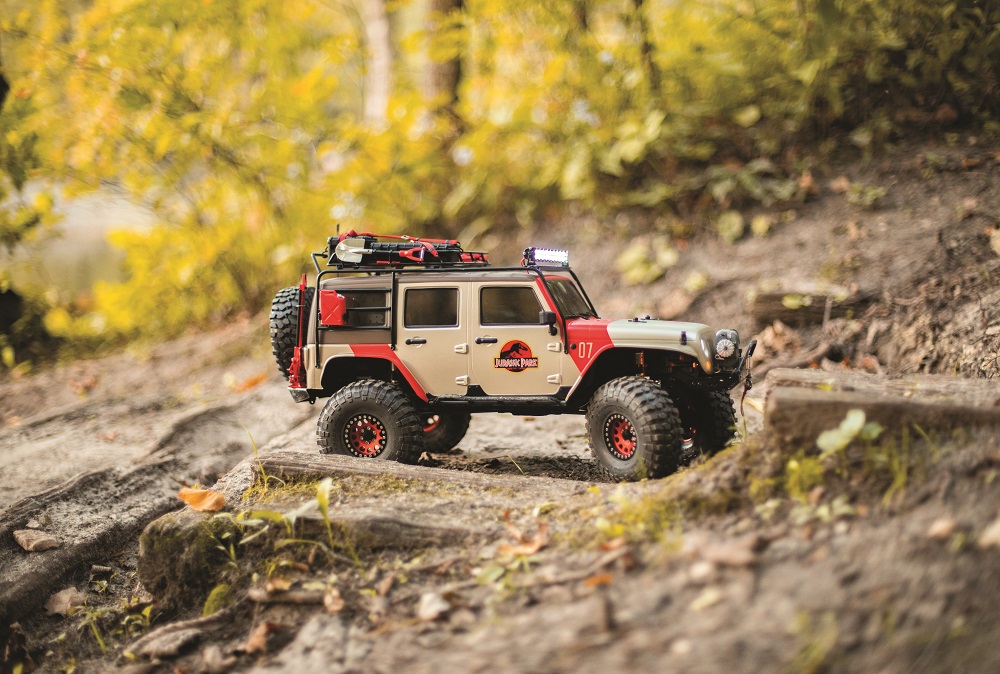 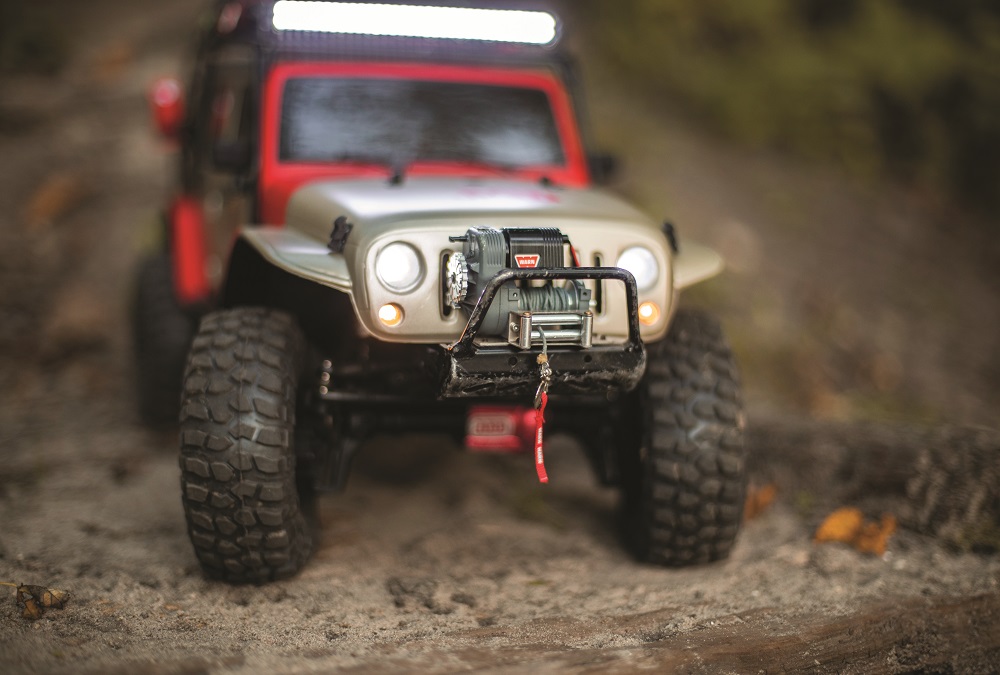 More details were required for this build to pull off the complete package. I was off to RC4WD for a couple more scale items. Their Warn 8274 winch was a must. It’s an impressive little product that is capable of deadlifting 50 pounds. I tested this claim and found that it’s true. A nice metal bumper that allowed a winch to bolt right up was then installed and finished up the front end.

For the rear, I spent countless hours looking for a bumper that would fit the bill, realistic looking and heavy duty. I finally found ScalerFab, they do amazing work for the scale crowd. It’s a great quality product that was exactly what I needed for this Jeep. Final details for the backend were some custom plates from RC Plate Shop and a Hi-Lift from RC4WD along with a matching spare bolted onto a Knights Customs rear tire carrier.

After purchasing some red beadlock rims from eBay, I needed some tires. Pro-Line’s BFGoodrich Krawler tires are just what this Jeep needed to keep its scale appearance. The Krawlers in their Predator compound are unstoppable. They handled all the terrain I threw at the Jeep incredibly well. Super soft for those colder temps, yet not too soft for the summer heat.
After all of this extra weight was added, I needed to work on the suspension. I chose Pro-Line’s heavy duty springs and also added a Bowhouse low center of gravity battery tray to assist in keeping the wheels on the ground. It’s a nice product that was an easy install and did exactly what it said it would. 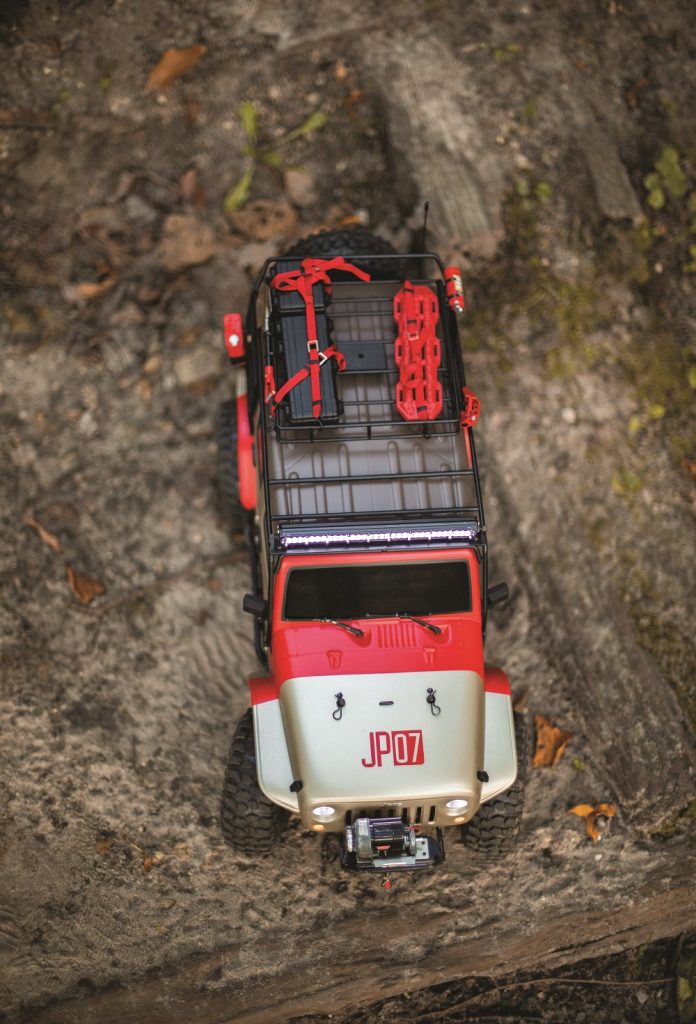 Lights, camera, action! Wait, not yet, I still needed the lights…. On the roof I once again was on RC4WD’s website for some realistic light bars and they didn’t disappoint. With a license from KC HiLites, they offer some super realistic options. For the rest of the lights on the build I contacted My Trick RC. They offer some incredible solutions for lighting up your RCs. This build has headlights, fog lights, brake lights, reverse lights and tail lights, all of which are properly working.
Finally my Jurassic Park build was complete, but was she ready to get to work at Jurassic Park? Was she ready to outrun some T-Rexes that may escape? This rig has handled everything I’ve thrown at her and more. The electronics have managed to keep me impressed with their performance. The motor and ESC are incredibly quiet yet powerful. I have never needed more power than what it could offer. The servos have been super dependable too. They keep the transmission and differentials in their proper settings, and the wheels pointed where I wanted them. The Traxxas TRX-4 chassis was a durable starting point to begin with but with the modifications I’ve done to it during the build, it has become even more T-Rex proof. 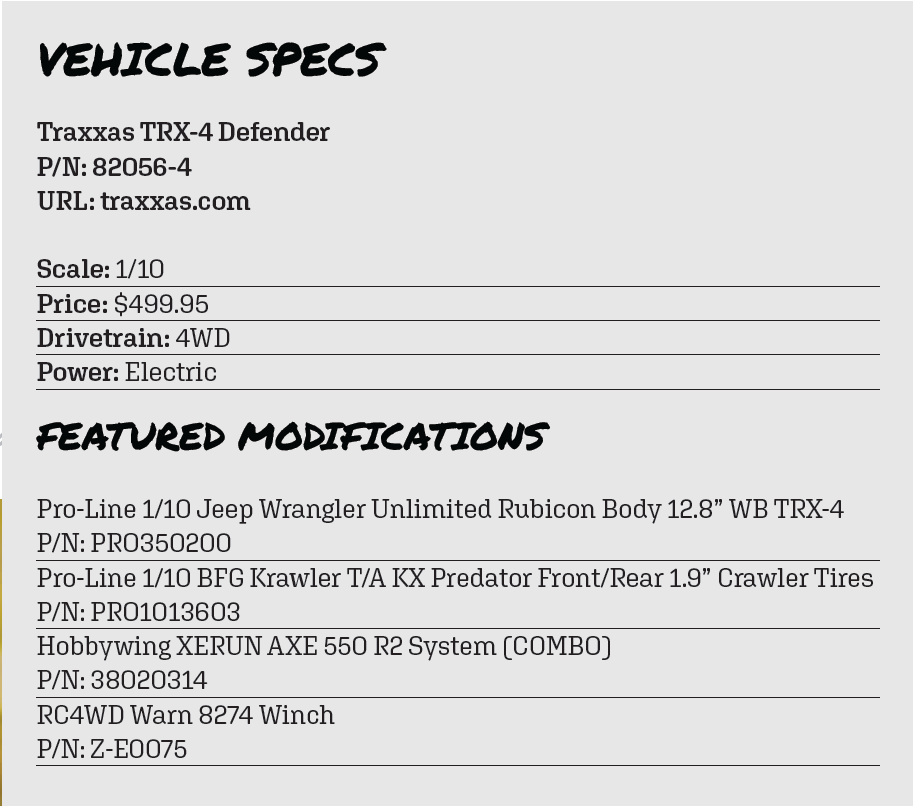 I love driving this truck; she’s my first step into the crawler scene but definitely won’t be my last. There is something satisfying about taking it slow, nailing the line on the course all while looking as good as this build does! I am incredibly happy with how she turned out!
For more of Matt Brase’s adventures and paintwork, follow him on Facebook by searching for MR Custom Painting.