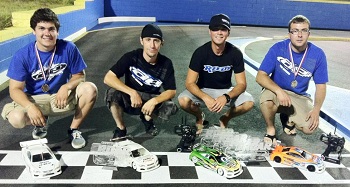 This past weekend, Jackson RC held the Electric On-Road Roar Region 2 Championship. This is the same site that will host the Electric Paved On-Road Nationals at the end of July. Weather was on our side all day on Saturday and the track was in super good shape for a great day of action.

Having only one morning to get used to the track, having two cars prepped was a good help to get more track time. I only got to run each cars twice before the start of the race, but my Factory Team TC6s already felt good and the track was getting better and better. The Curbs were very nice and easy to ride which was very promising for good racing. With 3 rounds of qualifying and rocket round style qualifying it was important to see how much the track would change throughout the day since most tracks get faster at night.

In the 13.5 class, after 3 runs of qualifying, I was able to grab TQ over fast local racer Mike Haynes by completing the only 25 laps run. We ended up running the main later at night when it was dark and to my surprise the track was not any faster. If anything, I went slower than I had run in my last qualifier when the sun was still out. In the final, Mike and I got away cleanly at the start and put a gap between us and 3rd place and stayed pretty close for the first 2 minutes. was able to put a few seconds on Mike in the final 3 minutes of the race that would hold to the finish line. Final Order: Keven Hebert (Associated/Reedy/LRP), Mike Haynes and Steve Sohl.

In the Modified Touring class, it went exactly the same as 13.5 Touring. I was able to TQ all 3 rounds of qualifying over Mike Haynes. In the main, Mike and I put a gap on third place and pulled away. It stayed pretty close for the first 2 minutes, but then I was able to extend my lead to a little over 4 seconds by the end of the race. Final Order: Keven Hebert (Associated/Reedy/LRP), Mike Haynes, and Sam Isaac

In the 17.5 Blinky class, Team Associated’s Jeff Cuffs was fast all week end along with local fast guys Mike Hanulec and Jerry P! In the last round of qualifying, Jerry would grab TQ and Cuffs would be second on the grid. Unfortunately in the main, Jerry had radio issues early and Cuffs was able to go by and leave the rest of the field and put a big gap between himself and 2nd place. Final Order: Jeff Cuffs (Associated), Scooby Horton and Mike Herald SR.