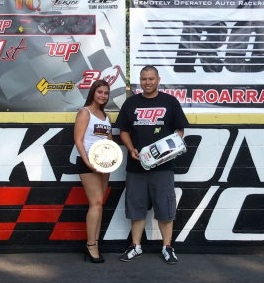 What a weekend it was for on-road racers from around the country!! The ROAR Paved Nationals was held at the beautiful Jackson RC Raceway this past weekend. The biggest turnout for this Nationals race since 2005. They had 130 entries and 6 classes consisting of touring car, pan car, vintage trans am, 1-12 pan car and a WGT class.

On-Road racers battled, not only each other, but also the hot humid temperatures New Jersey has to offer. On top of the hot weather, a cyclone hit the track at the end of qualifying on Friday July 29. We were thankful that everyone was safe. Radiopost team was in full force with a TQ in WGT by our driver EJ Evans who dominated the WGT class all week and another 3rd in open modified touring car. EJ was on fire all weekend, literally!!! He was a busy guy having entered 3 classes. Congratulations to all the winners. It was a great weekend for Radiopost and its first ROAR Nationals debut. ROAR Paved Nats 2011 is in the books and there will be more to come.