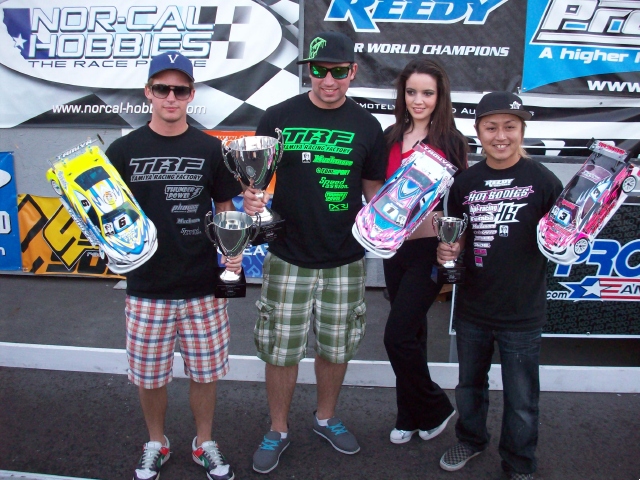 Marc Rheinard and Viktor Wilck, powered by Thunder Power RC, battled through the field of twenty-seven of the world’s top drivers to place 1st and 2nd in the Reedy Race of Champions Invitational Class. The event was held May 28-29, 2011 and was hosted by Nor-Cal hobbies in Union City, CA. This challenging two-day event consists of racing in three open-to-the-public touring car classes: 13.5T, 17.5T, and Open/Modified. The Reedy Race of Champions is a unique racing format with a grueling 8 rounds of heat races normally consisting of 4 rounds of racing per day. All races began with random starting position and ended with points associated to each driver for their finish position (1st place = 1 point, 2nd place = 2 points, etc.). The overall winner was determined by the lowest tally of the best out of 6 finishes as drivers were able to throw out their worst (highest) 2 scores. This year the weather did not cooperate with the four rounds of heats per day. On day one, the rain delayed a few heats and then washed out round 4 leaving day two for 5 rounds of competition instead of the normal four.

In addition to the Invitational Class wins, Thunder Power RC drivers TQ’d and swept the wins in all three open classes. Jesse Stark TQ’d and won the Open Modified Class with fellow TPRC team driver Kevin Woods finishing in 3rd place both powered by the TPRC Pro Race 65C Series batteries. The 17.5 Ramping Class was dominated by TPRC with Jeff Hastings in 1st, Andrew Hardman in 2nd, Arun Misra in 3rd and the TQ by Kyle Bergstrom all running Thunder Power RC G6 Pro Race 65C Series Batteries. The 17.5 Non-Ramping Class brought TPRC to the podium once again with the TQ, 1st, 2nd and 3rd Place finishes by Austin Brumblay, Juan Aveytia and Arun Misra, all powered by TPRC Pro Race 65C. In addition to his TPRC Pro Race 65C Series battery, Arun Misra’s power setup included a TPRC Z3R 540 Brushless Motor when his touring car crossed the finish line in 3rd place. We are proud to be the dominating power behind these top wins at the 2011 Reedy Race of Champions and to be represented by an extremely talented team of drivers. Congratulations to all of our drivers we appreciate your support.

We would like to pass along our condolences to the family of Mike Reedy. Mike’s legacy will live on with the Reedy Race of Champions, the unique race format and all of his contributions to the RC industry. Mike, may you rest in peace and your legacy live on.