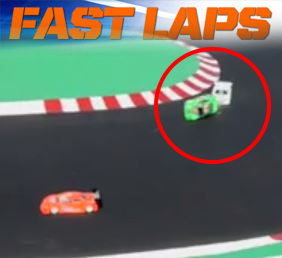 Last weekend, the Reedy International Touring Car Race of Champions returned to the immaculately prepared asphalt of Tamiya America’s track in Aliso Viejo, CA for the first time in five years, and while you’ll find a full race report later this week (spoiler alert: German Yokomo/LRP driver Ronald Volker won the Invitational class over world champions Marc Rheinard and Jilles Groskamp) there was controversy surrounding the title-deciding third A-Main for the spec 13.5-turn class after a race-long battle between previous leg winners Kyle Bergstrom and Henrik Heitsch. Click the image below to start the video at the 2:52 mark, the incident in question happens five seconds later at 2:57. 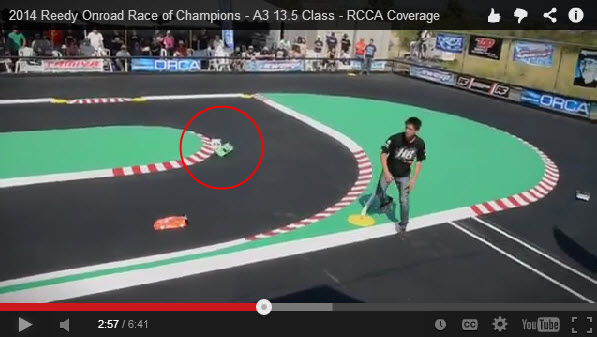 A bit of an ugly start further back in the pack immediately separated TQ Heitsch and Bergstrom, who settled into a battle as they stretched a gap from everyone else. About 45 seconds into the race (1:10 in the video) Heitsch hit the curbing entering the first right-hander, pushing him wide and allowing Bergstrom to make it by. Less than a minute later, Heitsch out-braked Bergstrom into the hairpin after the sweeper to retake the lead without contact, a truly incredible pass. At the halfway point of the race (2:55 in the video), another car crashed entering the infield and flipped into the front straightaway, taking the attention of the race announcer. The leaders entered that same corner (the right-hander where Bergstrom passed Heitsch just minutes prior) just as the turn marshal grabbed the car and placed it back in the proper part of the track, who drives slowly along the outside of the lane in an attempt to allow the top two drivers to pass. Heitsch clearly checked up entering the corner and Bergstrom couldn’t get slowed down in time to avoid driving into the right rear fender of Heitsch’s car. Heitsch landed on his wheels but not before Bergstrom went by, and despite several attempts over the remaining two and minutes Heitsch wasn’t able to regain the top spot. Bergstrom took the win and with it the 13.5-turn class championship.

Should he have won? Here’s how everyone involved affected the outcome:
Henrik Heitsch
First things first – if Heitsch maintains his speed entering the corner, this discussion doesn’t happen. We don’t know whether he timidly approached the turn because of the turn marshal grabbing the car that crashed into the straightaway, or his car simply got out of shape, but he didn’t enter the turn with the same rate of speed that he had on previous laps.

Kyle Bergstrom
Bergstrom knew he was stronger than Heitsch in that particular corner, having made a great inside pass a few laps prior, and was well within striking distance to try to do it again even if Heitsch hadn’t checked up. It’s unclear in the video if Bergstrom hesitated because of the contact, or because the orange car that had crashed onto the straightaway was still on the outside of the lane, but Bergstrom didn’t get back on the gas until Heitsch landed back on all four wheels.

Crashed car
The identity of the driver in control of the vehicle that wrecked and caused the melee (one of several all-orange vehicles on the track) is unimportant, especially because there was absolutely nothing he could do. There was absolutely no way of knowing that his mistake would eventually affect the outcome of the championship, and once the turn marshal set his car down on the racing surface he did the right thing by staying well out of the racing line so that the leaders could pass.

Turn marshal
There was no reason for the turn marshal to hold onto the wrecked orange car longer than he did – he removed it from the straightaway, which could’ve been an even larger disaster, and set it back on its wheels where it left the track, far outside of the racing line.

Announcer
Having manned the microphone for many national and world championship-caliber events, Scotty Ernst is the best in the business. He took his attention away from the battle for the win only briefly, in order to alert other drivers and turn marshals to the potential danger of a crashed car sitting on the front straightaway, which at the time was a much higher priority. Without seeing exactly what happened in a different part of the track at that instance, Ernst was not able to rule immediately whether Bergstrom should’ve completed a stop-and-go.

Race official
As the referee for the event, it was Ron Schuur’s call whether or not to alter the outcome of the race by imposing a ruling after the fact. After reviewing the replay (available in slow motion at the end of the video) he determined that the crash was incidental contact and chose not to reverse the finishing results, which would’ve given Heitsch the title.

My personal opinion of this accident may be clouded by the fact that I’ve been on the receiving end of similar crashes more often than playing the role of the driver in pursuit, but I think that Heitsch got robbed. 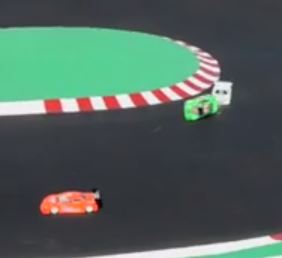 No insurance company in the world rules the green car at fault here.

I feel that Bergstrom should’ve hesitated a split second longer to allow Heitsch to regain the lead, and passed him without contact – after all, he still had half the race left to do so. Because Bergstrom didn’t stop, it was up to the race official to rule that although the contact may not have been on purpose, there was simply no chance that Bergstrom could’ve cleanly completed the pass in that corner – there was no room between Heitsch’s car and the inside curbing, and because Bergstrom didn’t stop on his own he should’ve been ordered a stop-and-go or assessed a penalty after the race.

What do you think?