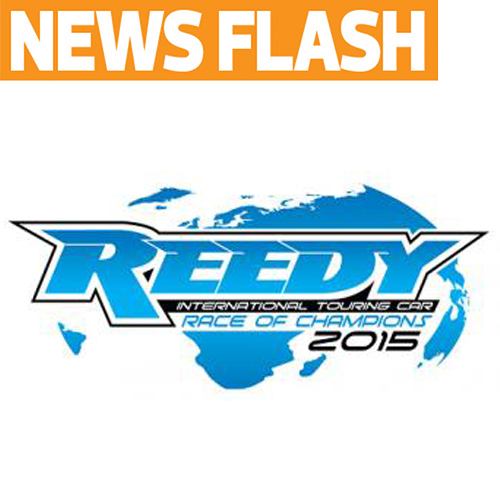 Reedy has just announced details for the 2015 Reedy International Touring Car Race of Champions. Last year saw Yokomo’s Ronald Volker step to the top of the podium in dominant fashion. Will there be a repeat or will the race crown a different champion? RC Car Action will be there in May to cover the event and find out who has what it takes. See the official release from Reedy below for all the event details.

What started out many years ago as Mike Reedy’s vision to showcase the world’s best drivers in a format unlike any other ever used in RC racing, has grown to be one of the most anticipated and prestigious R/C races in the world.

Reedy, Tamiya America, and Scotty Ernst Productions are proud to announce that the Reedy International Touring Car Race of Champions will return to the Tamiya America circuit May 21-24, 2015.

Entries open February 25th at Noon PST exclusively on www.reedyrace.com. Due to time constraints and to maintain the world-class nature of the event, total entries are capped at 160 for the Open classes. Due to high demand, a 17.5 class will also be offered this year in addition to the traditional 13.5 and Modified classes. Open class entries are limited to 160 (110 combined 13.5 and 17.5, 50 Modified) with each driver limited to one entry.

To allow everyone an opportunity to be a part of the 2015 Reedy Touring Car Race of Champions, a lottery drawing for the Open classes will be conducted on March 23rd, with those chosen securing a place in the event. Entry fees are not collected until after the lottery drawing for the selected Open class entries. One set of control tires and a souvenir t-shirt is included with each confirmed and paid entry.

Drivers that finished in the A Main in either the 13.5 or Modified classes at the 2014 Reedy International Touring Car Race of Champions will be given an automatic entry in the class of their choice. However, these drivers must sign up and pay their entry within the specified time frame.

Timetable for Entries:
Wednesday, February 25 Open and Invitational entries open
Sunday, March 22 (11:55 PM EST) Open entries close
Monday, March 23 Open lottery drawing, winners notified
Sunday, March 29 (11:55 PM EST) Deadline for Open and Invitational payments. ALL NOTIFIED RACERS MUST PAY THEIR ENTRY VIA PAYPAL BY THIS TIME OR NAMES WILL BE REMOVED FROM ENTRY LIST AND YOUR SPOT FORFEITED AND GIVEN TO DRIVERS ON THE WAITING LIST.

The format and schedule for the event remains similar to that of last year including all main events run over three legs:

Information and updates including rules, spec tires, hotels, and more will be posted soon at ReedyRace.com and on Reedy’s Facebook Event page.