The photos of the extraordinary RC rendition of a classic American muscle car you see on these pages came to us from a pretty unlikely place: Malaysia. It is the brainchild of Rengan Krishna Iyer, who embarked on a five-year odyssey to scratch-build an RC car that not only looks but also functions like an authentic muscle car. Chassis layout, driveline orientation, suspension configuration—Rengan discarded traditional RC car conventions to redesign virtually every major structural element to work as much like a real muscle car as possible. When he was finally happy with his results, he submitted the tale of its creation to Readers’ Rides. His achievement was far too remarkable to be covered adequately there, so I reached out to him to share more details and photos. What follows is his account of how his custom muscle-car creation came to be. 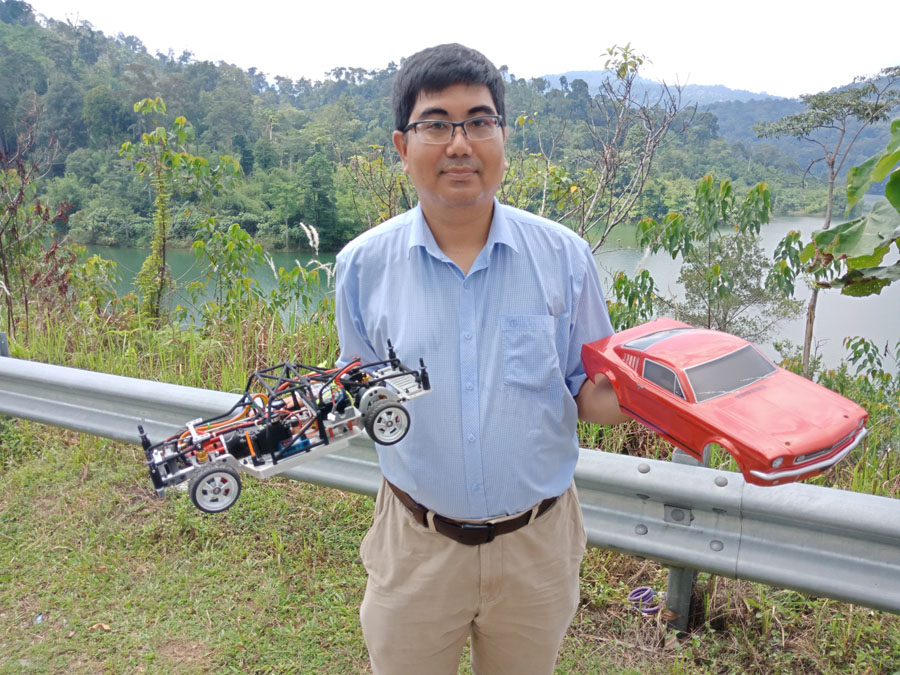 Rengan Krishna Iyer is the mastermind behind this amazing design. He fell in love with American muscle cars as a kid growing up in Malaysia and was determined to create his own ultra-realistic RC version.

I hail from Malaysia and have been an avid American muscle car and RC model fan since I was seven years old. I have always dreamt of owning an actual muscle car (and, hopefully, one day I will!), but in the meantime, I had long toyed with the idea of building my very own 1/10-scale RC muscle car chassis. I loved the idea that RC vehicles could look and function as realistically as possible; for me, vehicles like Tamiya’s Bruiser and Sand Scorcher represent RC scale realism at its best. When I was exposed to photos of HPI 200mm Vintage Trans Am (VTA) bodies on the Internet and in RC Car Action back in 2014, I began planning my very own RC muscle-car chassis that has many features like its full-size counterpart and that would fit under readily available 190–200mm RC VTA bodies. My project would take me on a long five-year journey and go through several iterations. 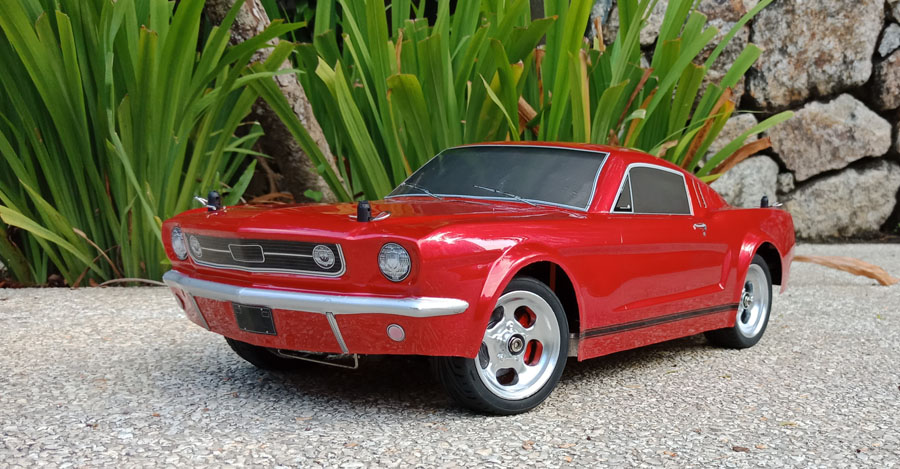 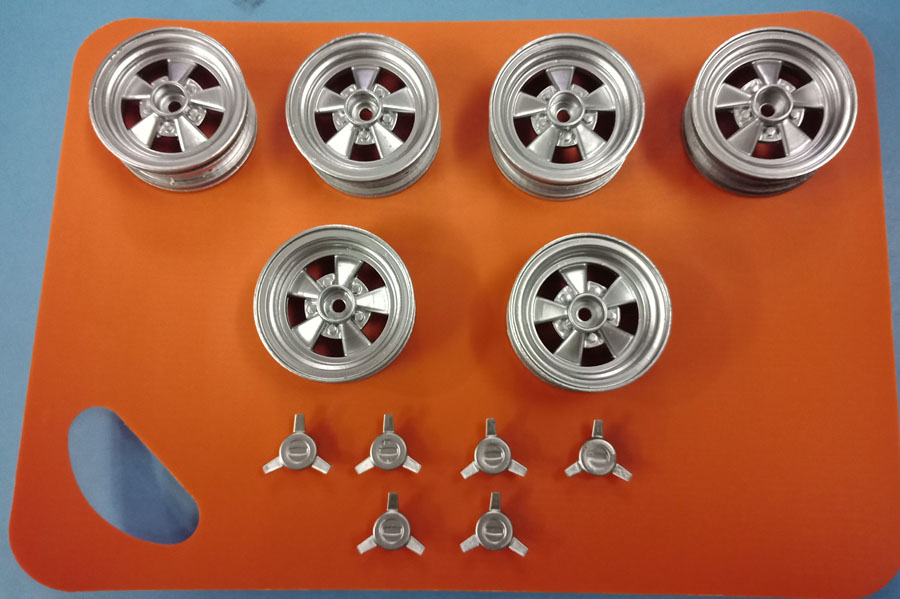 My first version of the chassis—the V1—was constructed by tracing along cardboard templates placed over thick aluminum plates. The individual parts were cut out using hole saws, a drill press, and an angle grinder. The work was difficult and took a long time to complete. I then bolted the chassis parts to a self-made jig and sent it out for TIG welding to form left and right sections. After the chassis was ready, I cut plates and bolted them to the chassis to form the trunk, front floors, and other parts. I fabricated the front bumper, rear cross-member, transmission cross-member, and front subframe from thick aluminum plates and bolted them to the chassis rails using countersunk hex bolts. The rear axle was based on a shortened version of an Axial AX10 with custom shortened axle shafts. All the shafts—steering, rear axle, and transmission—were machined on my Chinese SIEG M10 Lathe/Mill combo. 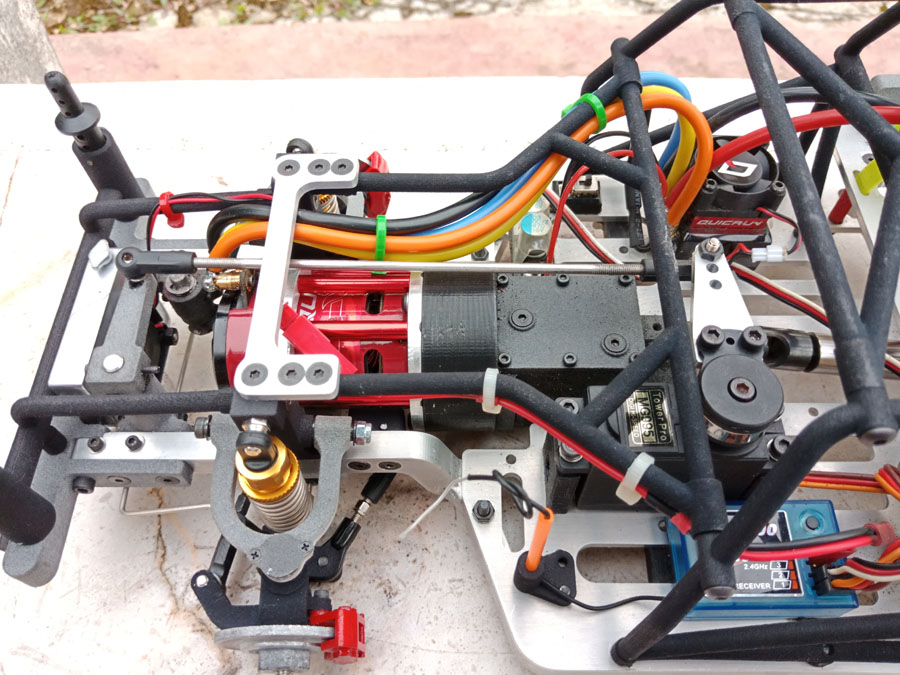 The steering system uses a center-link setup just like real muscle cars, and has a scale-looking steering box, pitman arm, and idler arm. The system has proper geometry so that bump steer is minimized, and the toe is adjustable to optimize stability and turn-in. 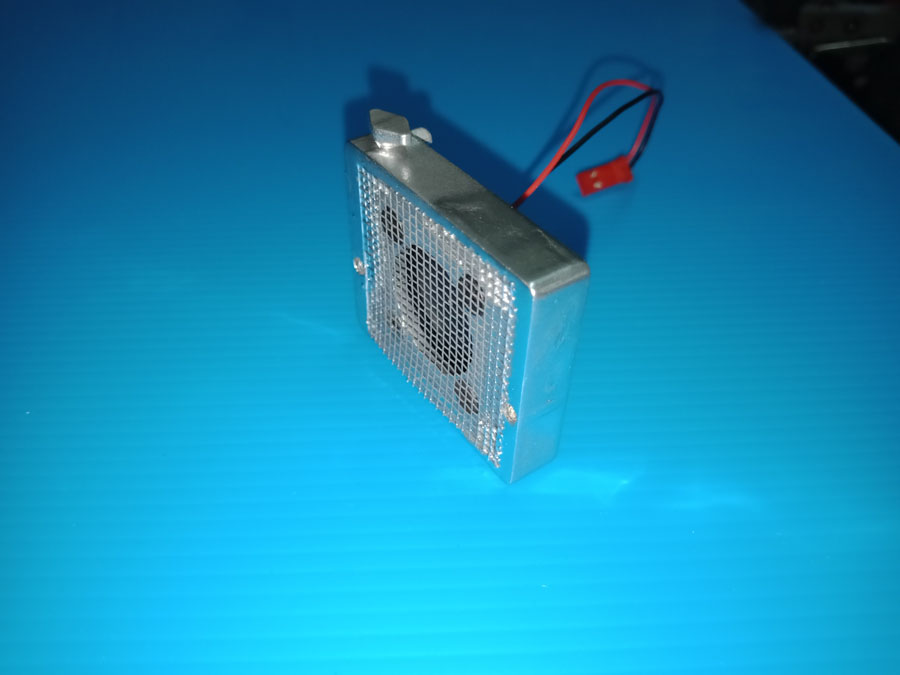 There is even a dummy radiator mounted in the proper location that incorporates a functional 25mm fan to help cool the motor!

The first version was almost complete by late 2016. Around that same time, I was introduced to Shapeways SLS 3D printing by my brother. He has made many RC parts for his Kyosho Optima Mid using its services. I was impressed with the results and decided to halt further work on V1, but the experience gave me knowledge for my next evolution of my design, which would utilize 3D printing extensively. I did not have much knowledge of CAD design and set myself a goal to learn it as that would enable me to design the entire V2 chassis and related components instead of having to buy and modify off-the-shelf parts. I was fortunate that my brother was well versed in CAD. I worked with him for months and watched countless YouTube videos. With the knowledge I gained, I was eventually able to design each part for V2, and I got them 3D-printed via Shapeways. After several 3D-printing iterations by trial and error, I had impressive results.

The 3D-printed V2 chassis was strong but not very rigid, so I designed a roll cage to improve its stiffness and give it a proper race-car look. With the V2 rolling chassis completed, I equipped it with a 540 brushless motor, radio, ESC, servo, and battery and made the maiden test run at a local RC track on September 24, 2017. My brother was the test driver, while I documented the performance of the car. V2 proved to be a success; it was durable and handled well in corners. It was a little heavy as compared to other 1/10-scale RC touring cars, but it drove much like full-size muscle car.

The knowledge gained from multiple track test runs was used to improve V2. I designed a set of harder front springs to compensate for front-end dive during braking, and reduced body roll with a custom designed front anti-swaybar. The springs and anti-swaybar were custom wound and bent to my specifications by a local spring maker. I broke several front suspension arms and spindles during test-run crashes. I revised, reprinted, and replaced the failed parts for improved durability.

After the success of V2, I decided to revisit my original aluminum chassis V1 and take my project to greater heights by producing it in a kit form. I stumbled upon some desktop CNC routers, which were relatively affordable and would enable me to produce aluminum parts professionally at a low cost. After many months of trial-and-error CNC machining, I was finally able to fabricate successfully a new billet-aluminum chassis and related components. I also combined the nylon 3D-printed parts into several parts trees to mimic commercially available RC kits. Although the aluminum chassis is more rigid than the 3D-printed V2, I thought (for cosmetic purposes) that it would be really cool if my V3 chassis were to have a roll cage. I also wanted a set of period-correct mag wheels, so I designed and 3D-printed 1.9-inch versions of the classic Ansen Slot mag wheel along with a set of the Cragar SS wheels. I am happy that my project has finally come to a successful conclusion and that I have achieved my goals to create a proper, realistic RC muscle-car chassis to complement VTA bodies.

The short-long arm double-wishbone front suspension is modeled after those in the Mustang II, Javelin, and Camaro. It includes: 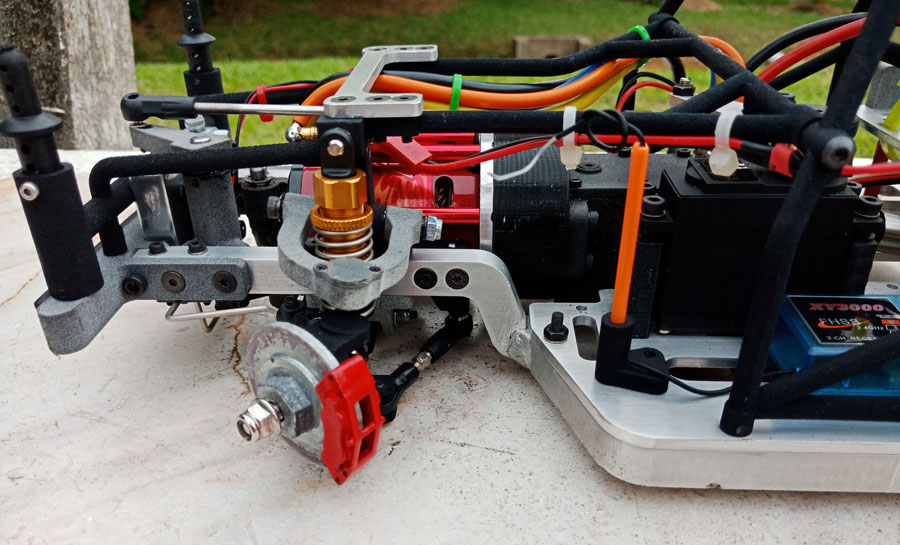 The rear suspension is modeled after the classic Dana 44 rear-end housing, with the following characteristics: 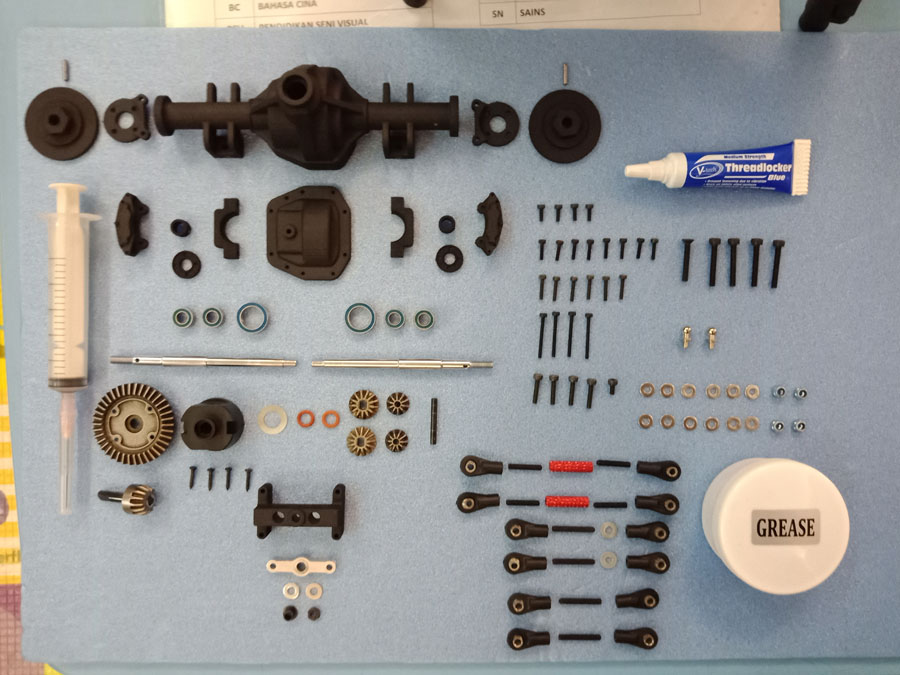 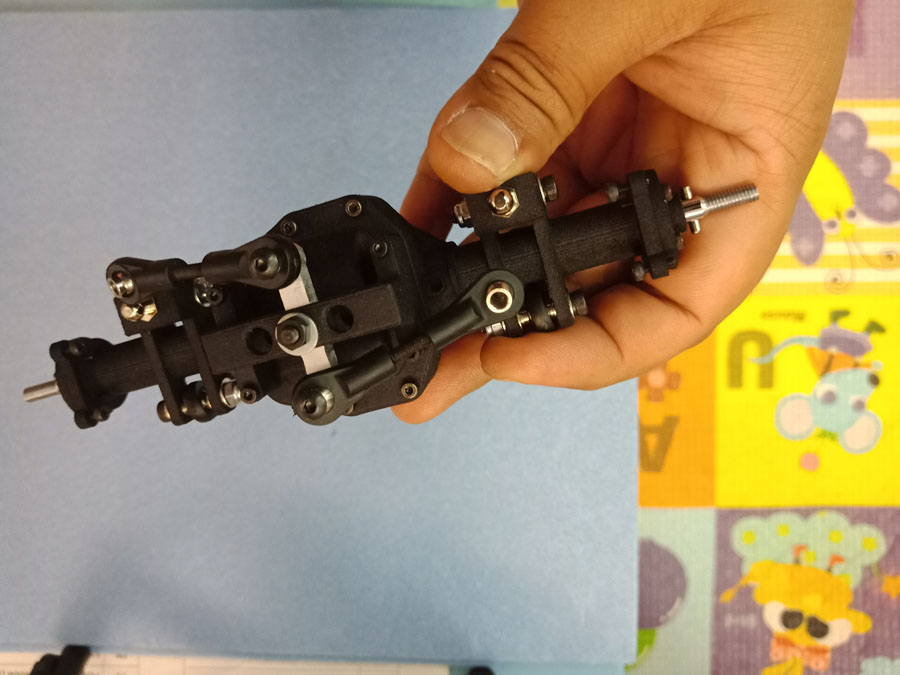 The 1/10-scale RC muscle-car chassis is based on 1960s–70s American Muscle cars with body-on-frame architecture, such as the General Motors A-bodies (Chevy Chevelle/Pontiac GTO), as well as elements from unibody muscle cars, such as the Camaro/Firebird, Mustang, and AMC Javelin. It has the following features:

Scale-looking CNC billet front and side rails, cross-members, and floors 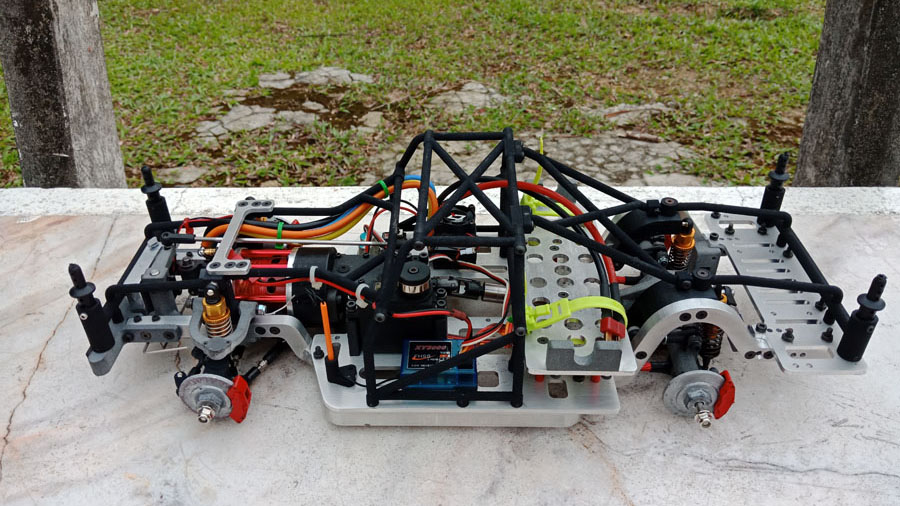 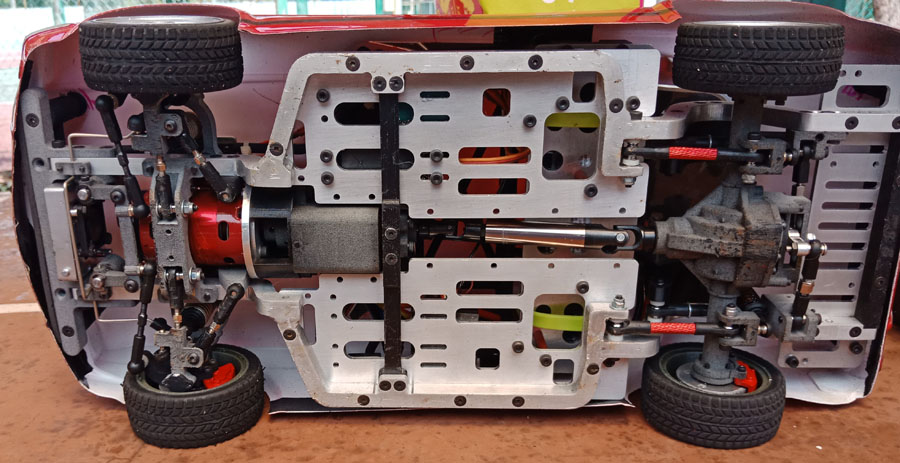 The transmission consists of four 48P pinion gears mounted on three shafts to obtain the correct gear ratio and fit within the transmission case, patterned after a classic muscle-car manual gearbox. It also has: