It’s no secret that no-prep drag racing has been a budding staple of asphalt-bound RC racers for quite some time now. The drag movement has seen a strong resurgence over the past few years and it’s safe to say that this genre of the hobby is boldly headed mainstream. It’s also no secret that many racers base their dragster builds on Traxxas’ venerable Slash chassis. Turning a short-course truck into high-speed drag racer may sound strange to the uninitiated, but it has long been the choice of drivers when it comes to modifying a car to blitz off the starting line in the blink of an eye.

Understanding this, Traxxas has developed an out of the box, ready to drag, version of the Slash that they aptly call the Drag Slash. The debut model of the Drag Slash comes in the beautiful guise of a classic Chevrolet C10 pick-up truck. Its drag race specific bodylines give the truck a tough, yet dartingly quick look. Let’s take a look at what’s under the body of the latest iteration of the Slash. 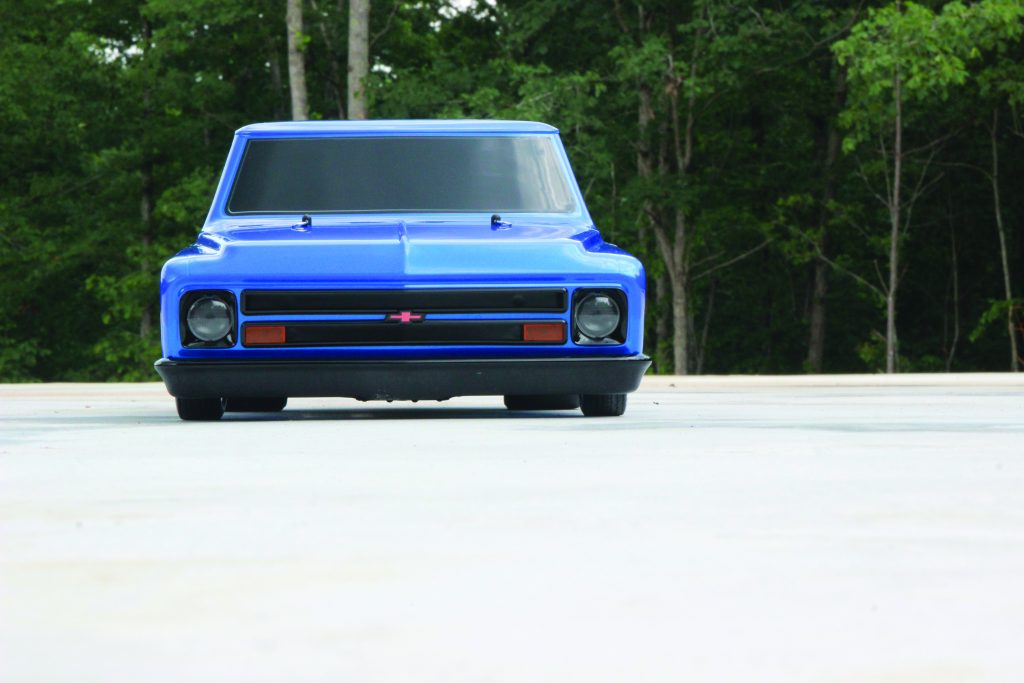 The Drag Slash Chevy C10 comes as a ready to run kit that only requires batteries and a charger to race. Talk about instant gratification. Those who are familiar with the Slash will recognize that the Drag Slash is outfitted with the low-center of gravity (low-CG) version chassis of the popular platform. A low center of gravity improves stability and handling, which is especially important when you are maintaining straight-line performance. The chassis aggressively hugs the track and features an aero stance that allows its body to slice through the air, yet maintains plenty of downforce to keep the car on the track.
Thanks to the factory installed Velineon VXL-3s speed control and 3500kV brushless motor, the drag C10 comes out of the box ready to rocket down the dragstrip, or at an impromptu parking lot track. Drivers control the C10 using an included Traxxas TQi 3-channel 2.4GHz radio system that comes with a Trans Brake feature. Trans Brake is a feature that allows you to launch off the line quickly and consistently. To use it, simply hold the TQi transmitter’s Trans Brake Switch and set the throttle at the starting line. When the light turns green, release the switch for the quickest launch every time.

If you’ve ever driven a drag car, you’ll know that keeping it running straight and stable is a big part of winning, losing or even crashing. The Drag Slash is specifically developed for the job of drag racing and part of its long list of drag specific features include Traxxas Stability Management (TSM) with Drag Race Mode. Forget errant runs where your vehicle torque steers to one side or the other. TSM’s Drag Race Mode makes your racer easier to control by combining the fastest possible straight-line acceleration with incredible stability and precise control. TSM also improves braking performance and helps prevent dreaded spinouts.

The brushless Velineon motor gives the C10 plenty of power, but without a competent driveline, all the power would be wasted. Recognizing this, the developers at Traxxas equipped the Drag Slash with their Magnum 272R transmission. The robust transmission is built for hard-hitting torque and features a blue-anodized aluminum motor plate, all-metal gears, and a sealed silicone-filled 4-gear differential tuned specifically for drag racing with 500K heavy-weight diff fluid.

Bringing power to bear is the name of the game and thanks to the 272R, this C10 is fully capable of it. Aside from a beefy transmission, the Drag Slash also boasts extreme-duty driveshafts that are 20-percent larger than those found on a standard Slash. Get ready to shred some tires.

Keeping the C10 grounded is a set of oil-filled Ultra Shocks are tuned with drag racing in mind. The strip-ready shocks feature stiffer springs, thicker silicone oil and custom bump stops. Trackside suspension tuning can be made by way of thick 4mm turnbuckles with heavy-duty tie rod ends with captured, large-diameter pivot balls.

Where the strip means the rubber is also essential to getting a drag car to run right. The C10 boasts ultra-wide licensed Mickey Thompson ET Drag Slicks mounted to replica Weld racing wheels. The slicks feature an innovative carcass design and molded high-density foam inserts for big-time traction off the line and straight down the track. The wheel and tire’s scale realism is only the tip of the scale iceberg. 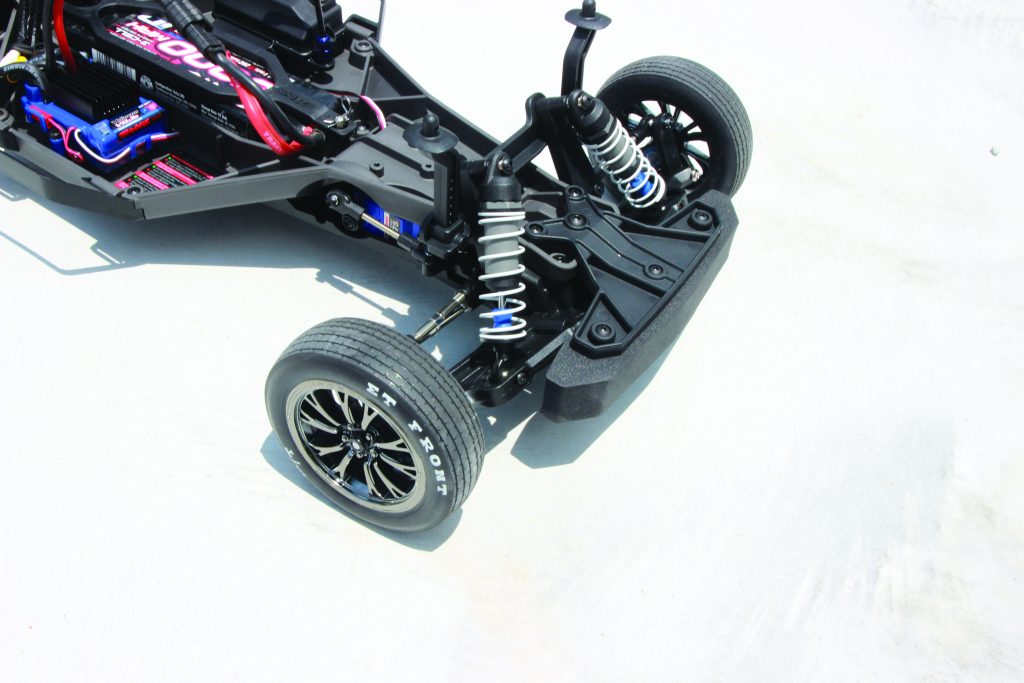 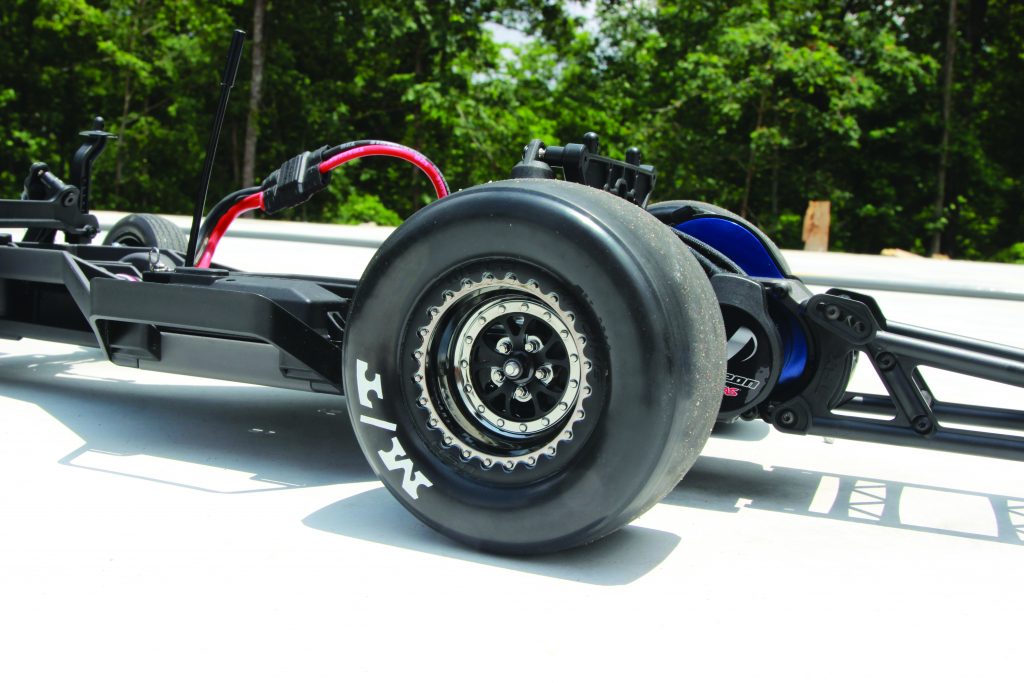 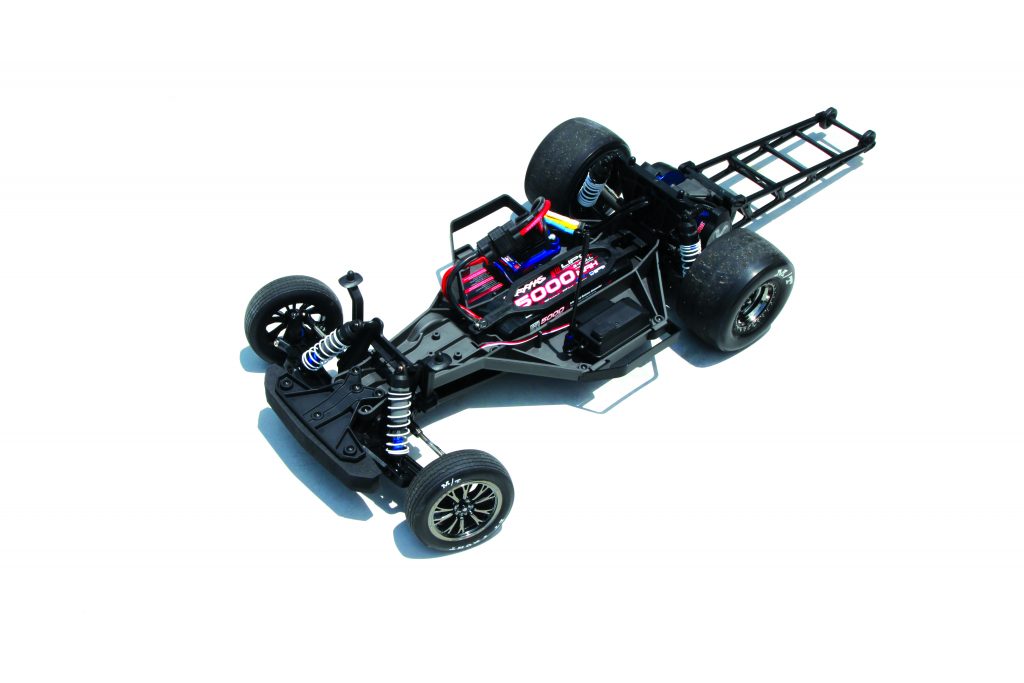 “If you’ve ever driven a drag car, you’ll know that keeping it running straight and stable is a big part of winning.” 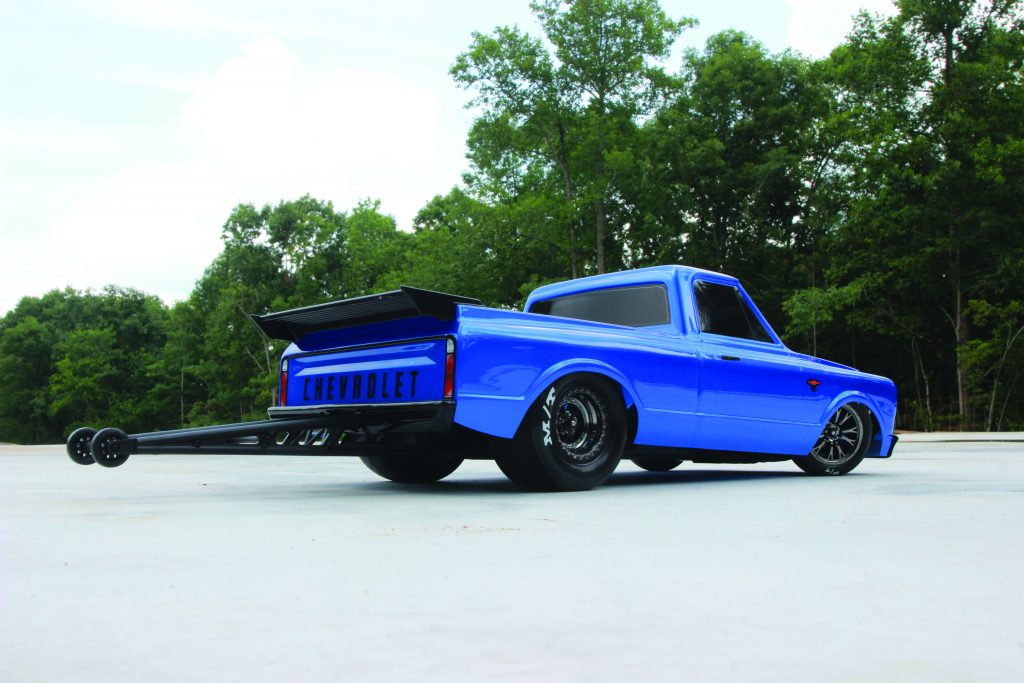 So we’ve already pointed out the stunningly accurate C10 body and realistic Mickey Thompson slicks and Weld racing wheels. What else have Traxxas designed into their first Drag Slash released? Let’s take a closer look.
The body features Chevy’s iconic bi-level grille and LED-ready headlight surrounds, which are individually molded for an extra realistic look. Its Pro Street-style wing is a functional part of the C10’s drag-style body. Its injection-molded construction keeps it durable and strong and its contour generates plenty of downforce for greater traction. The wing also reduces turbulent airflow on the body to allow it to slip through the air. 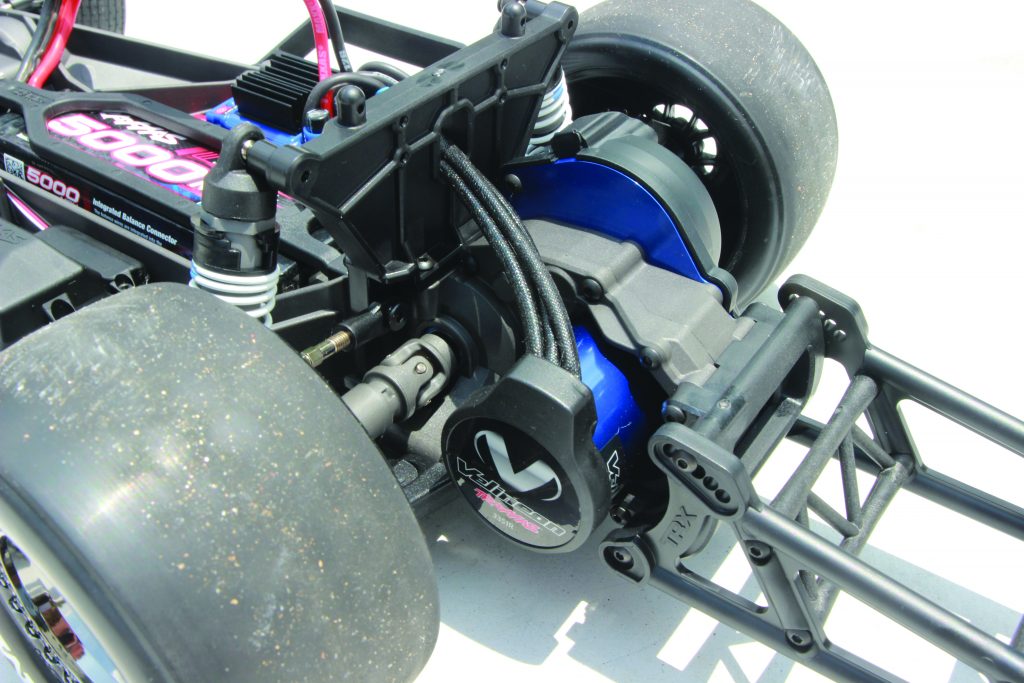 Thanks to its Velineon 3500kV brushless motor and hearty Magnum 272R transmission, the drag C10 is ready to rocket down the dragstrip right out of its box.

One factor that keeps many RC pick-up trucks from looking right is its bed. It’s not unusual to see a shallow, flat or featureless bed. The C10 features a deeply recessed and detailed bed that recreates the flat-plate tinwork of real-life dragsters. The look is of a tubbed bed that is contoured around the wide rear wheels, we really appreciate this detail.

Our C10 is finished in a shade of metallic ProGraphix paint called Brilliant Blue. If you prefer another color, it is also available in Redline, Green Machine, Ultra Violet, Diamond White and Midnight Black. Each color is rich and intense, perfect for a flashy drag truck. If the C10 body isn’t for you, its adjustable body posts can be made to accommodate just about any aftermarket body you want to throw on it.
Bringing up the rear is a five-position extended wheelie bar that includes your choice of two sizes of wheels. Because traction off the line is paramount when drag racing, the wheelie bar has a dual-ladder frame construction to keep it rigid even under the stress of a full-power launch.

We were excited to take the Drag Slash C10 out on a newly paved lot to see what it could do. With batteries charged up, we hit the pavement and got ourselves acquainted with this drag version of the Slash. As we anticipated, the C10 was tremendously quick right out of the box. With the help of its electronic TSM Drag Race Mode driving aid as well as Trans Brake, we were making competition launches in no time.

The Drag Slash was a blast to run but it did demand driving attention to get the most out of it. But that’s the case with all RC drag cars that we’ve driven. They’re so quick off the line that not paying attention for even a split second will get you into trouble. That is also what makes drag racing so addicting too. We believe that the C10 is a competitive dragster right out of the box, but also think that some extra mods will put it right at the top of the brackets on any given race weekend. 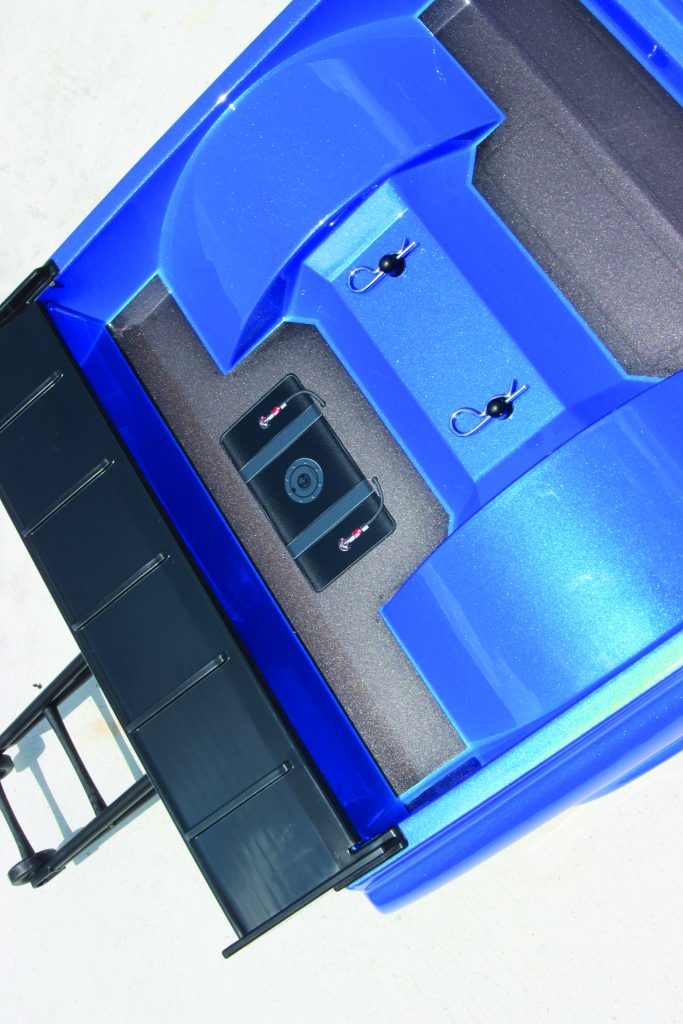 The C10 features a deeply recessed bed that recreates the look of a tubbed bed that is contoured around its wide rear wheels. 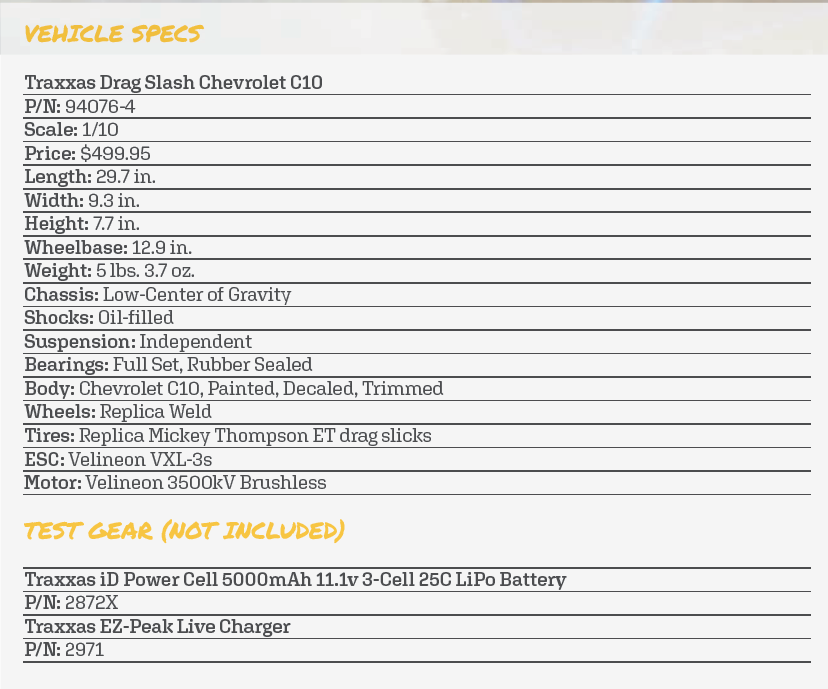 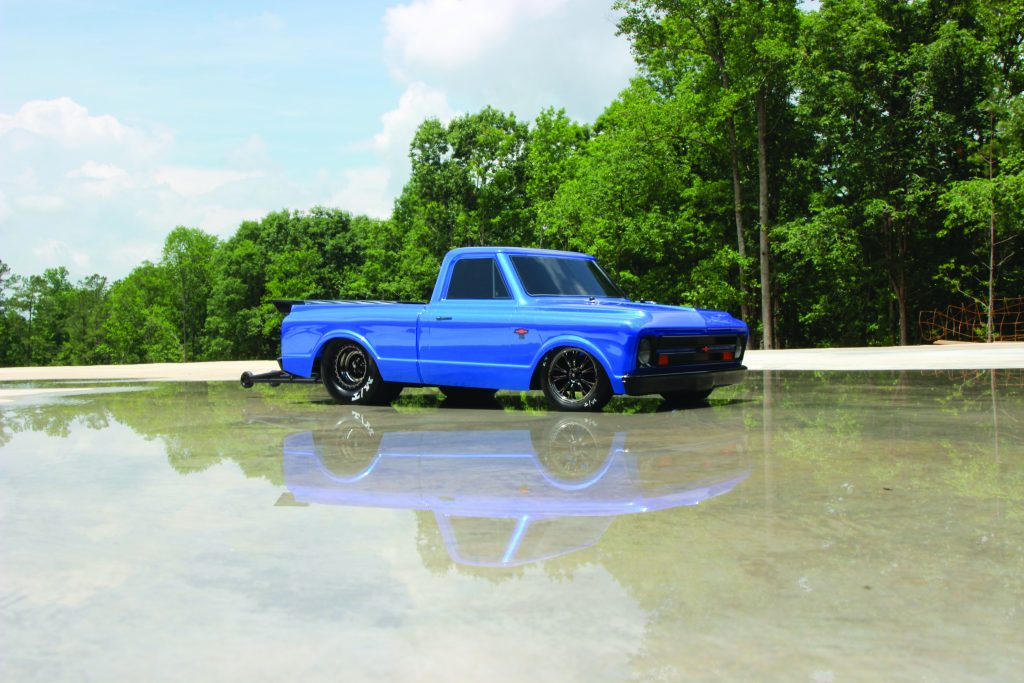 It’s about time that Traxxas came out with a proper, ready to run drag racer. For those who think that the Drag Slash is simply a Slash with drag wheels and tires, they’ll be glad to learn that there’s much more to it. With drag-specific aids and modifications, this most certainly is a Slash that is purpose-built to take on the dragstrip. We’re floored that Traxxas went with the classic Chevy C10 for the Drag Slash’s first release and look forward to seeing what other drag racers they’ll be coming out with.