Angel Ocasio « St Cloud, FL
Angelo built his tribute to the Mech-Tech College Corvette dragster starting with a retired Associated SC10 he had tucked away from years ago when he raced short-course trucks. Angelo, who operates of Unik Kustoms RC, watched with interest the increasing popularity of guys turning SC trucks into drag cars. He always enjoyed building custom stuff himself, so he decided to dust off his old SC10 and remake it in the image of the Mech-Tech C7 Vette since Pro-Line had the perfect body for it. He got a custom carbon fiber chassis and sourced a bunch of parts from Integy, updating some things since the SC10 stuff is no longer available; for example the rear end is now out of an Associated B5 with some DR10 parts. Angelo keeps that rear end planted with a Drag Concepts wheelie bar and Pro-Line supplies the wheels and tires. Angelo had the rims chromed to match the real Mech-Tech Vette, then added 3D-printed pipes and chutes. The paint was done by Frankie’s Airbrush & Graphics in Puerto Rico. 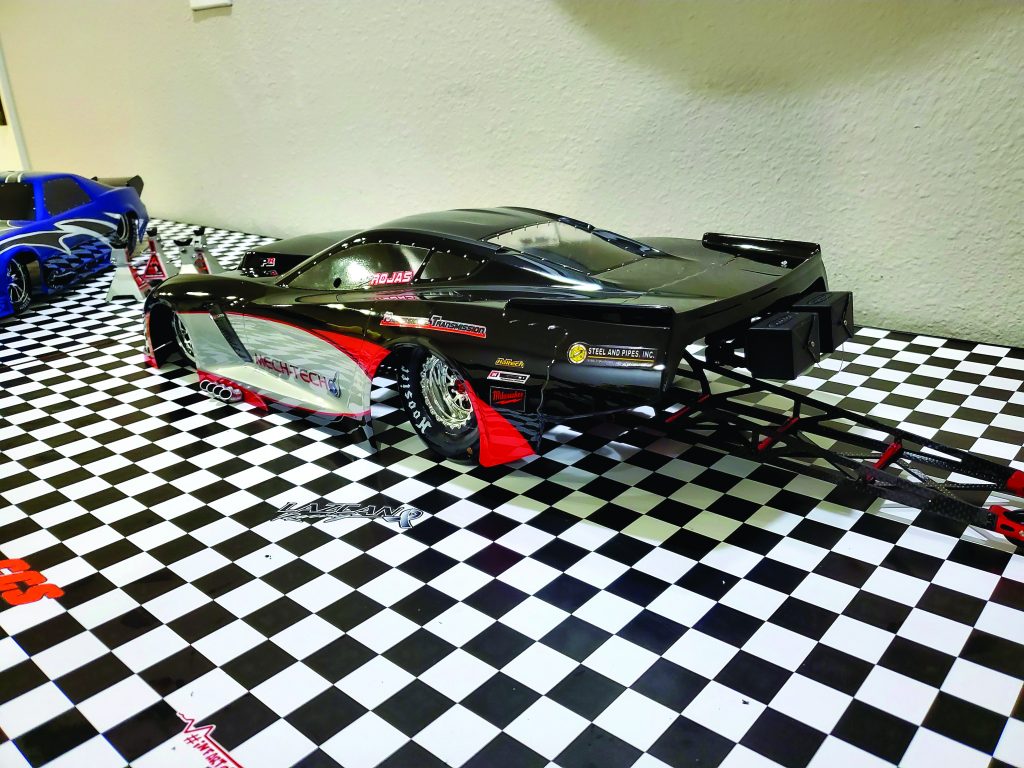 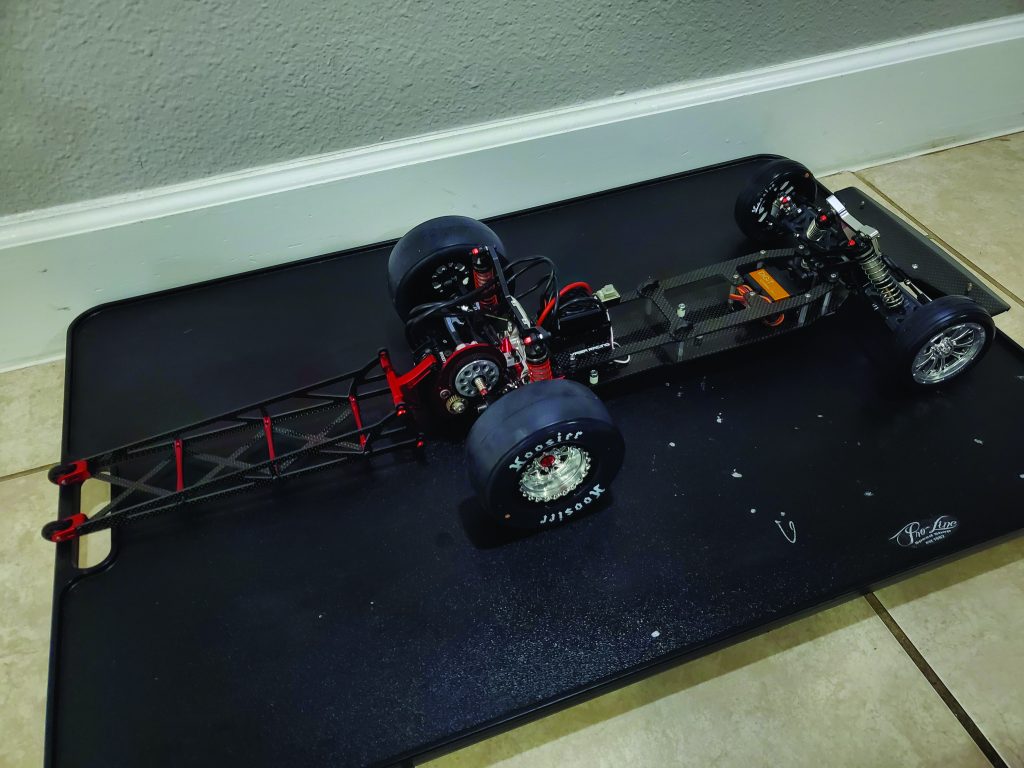 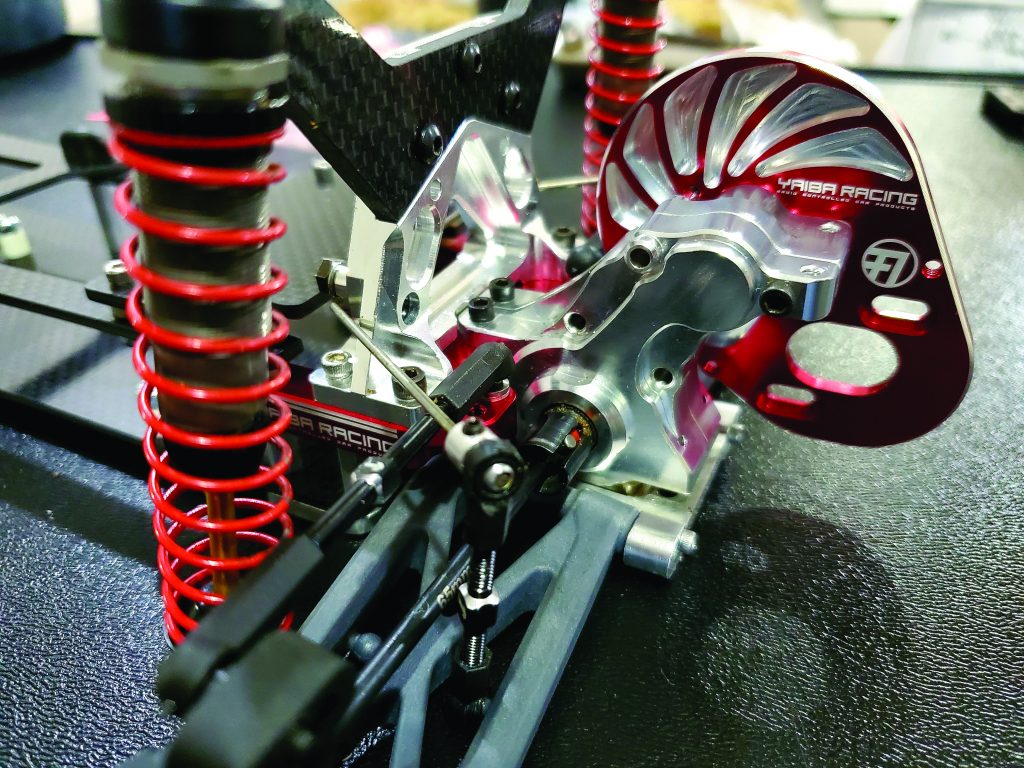 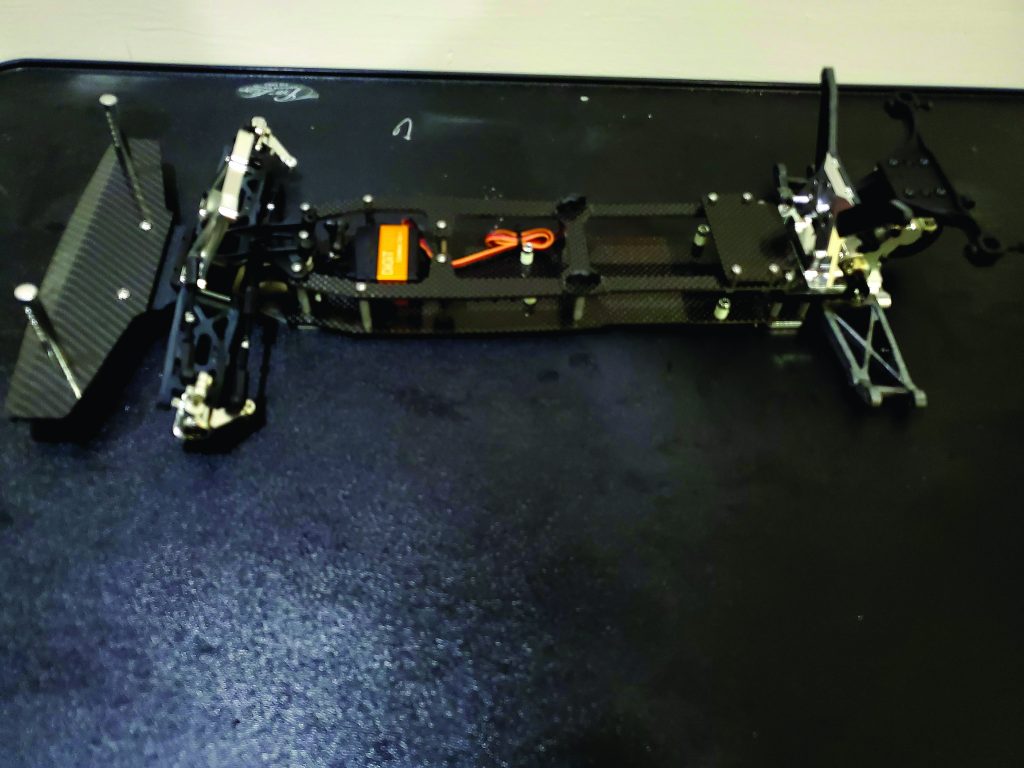 Kenneth Kennedy « Valley, AL
Ken tells us the Blazer started life as a run-of-the-mill Tamiya Highlift he got for Christmas when he was little, After beating it to death for 15 years he restored it with a RC4WD Blazer body wearing PPG paint. He installed a high/low engine and trans mod for more ground clearance, replaced the running gear with Traxxas stuff, and capped the K5 off with a set of RC4WD wheels and tires. The Sand Scorcher that the Blazer hauls around started as an original 1980s parts chassis Ken picked up off of eBay. He sourced all-original parts and rebuilt it with some body mods and full Traxxas running gear for this one too. The trailer he custom made from aluminum using a TIG welder and another leftover set of Scorcher wheels. 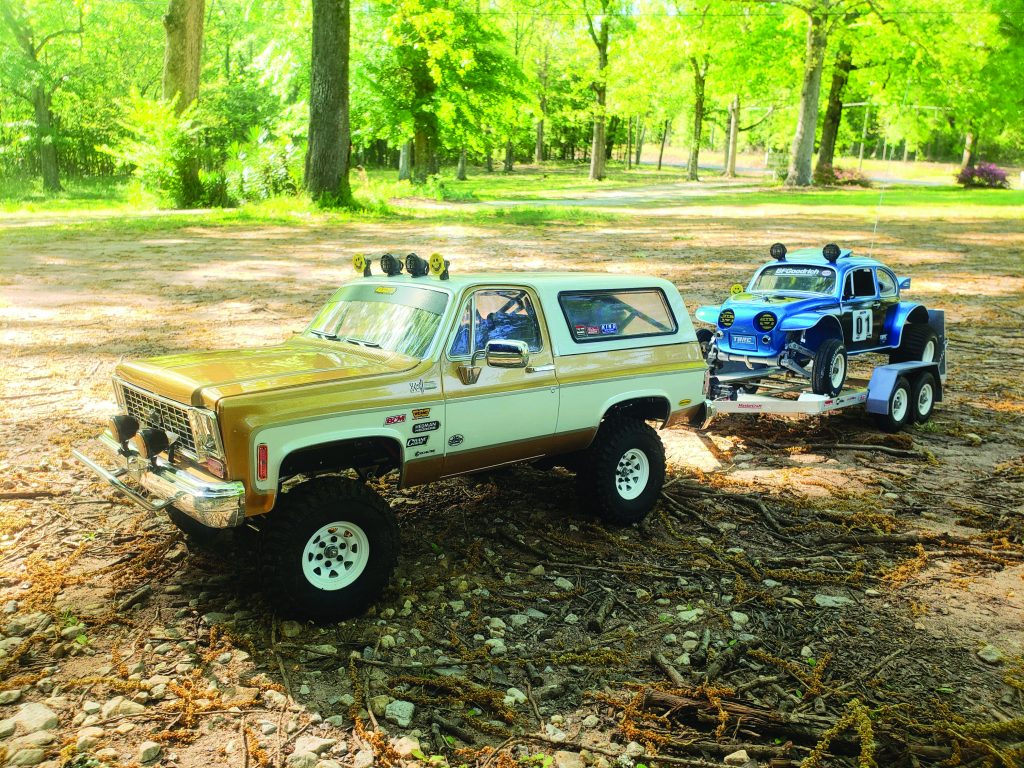 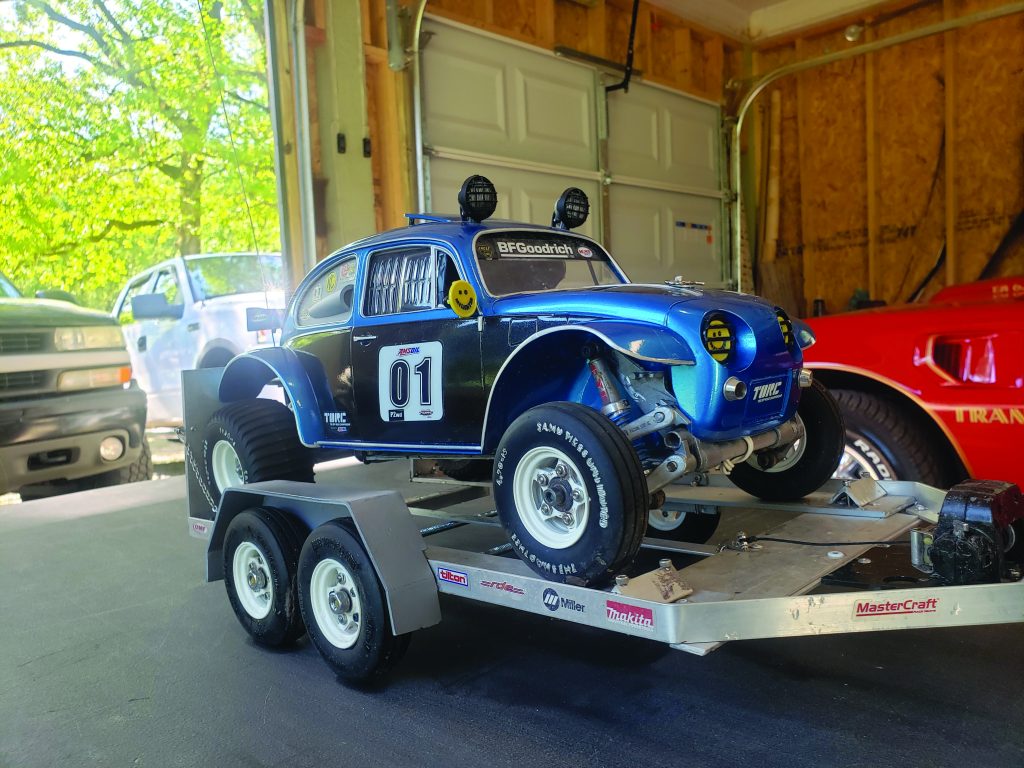 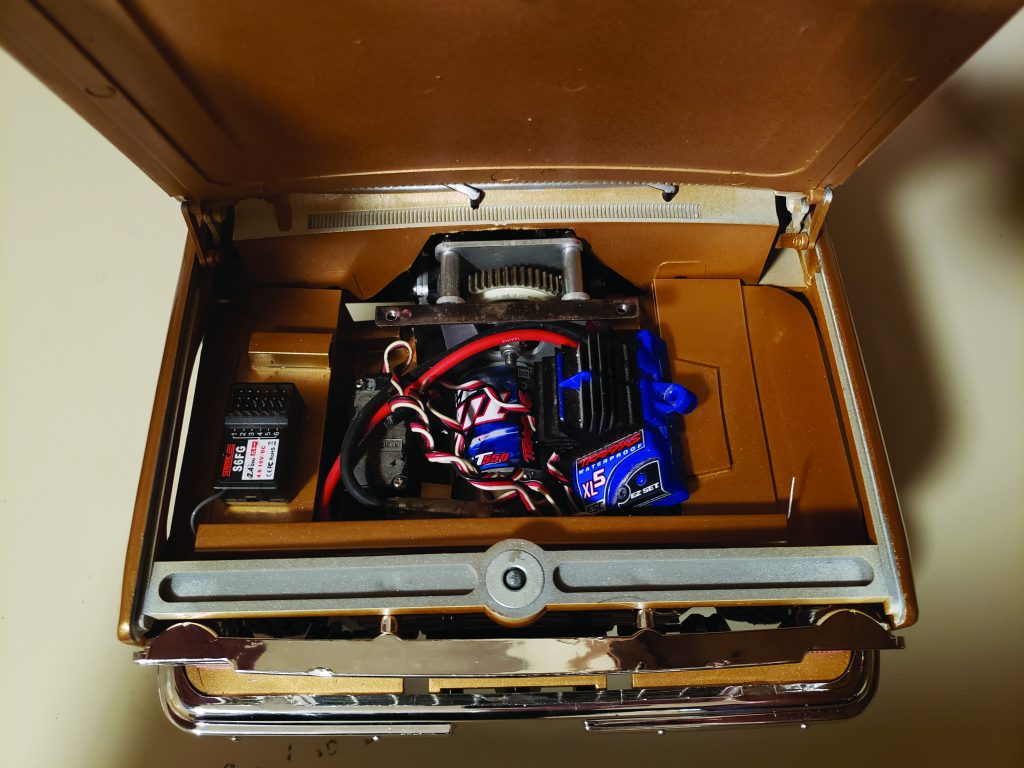 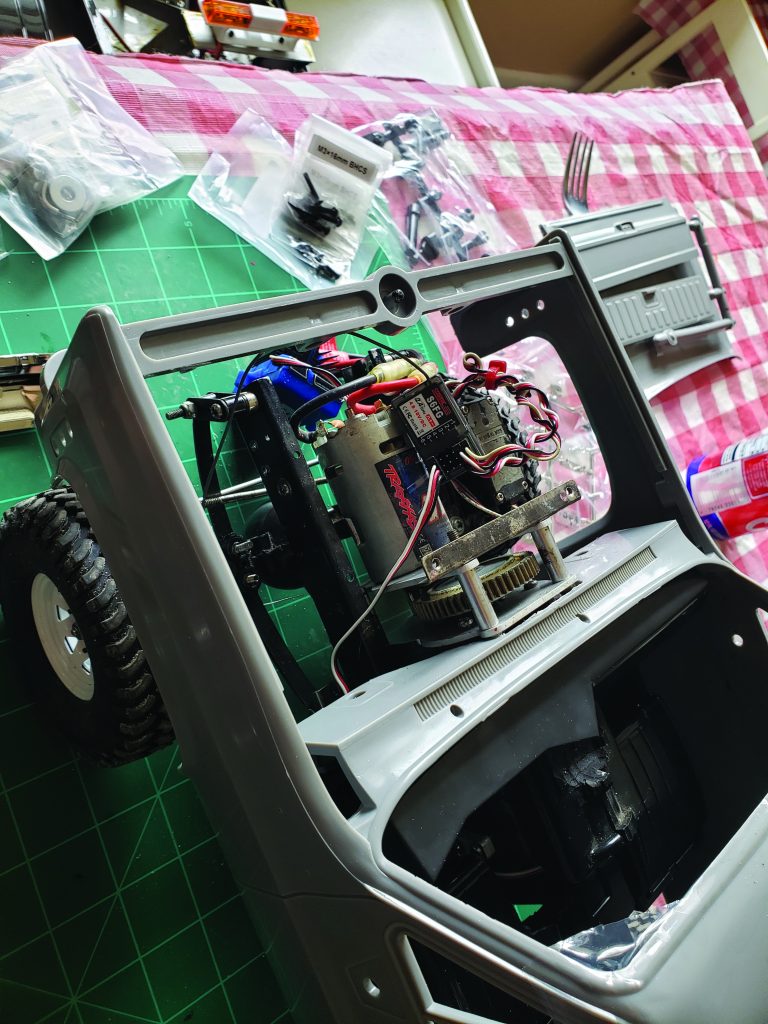 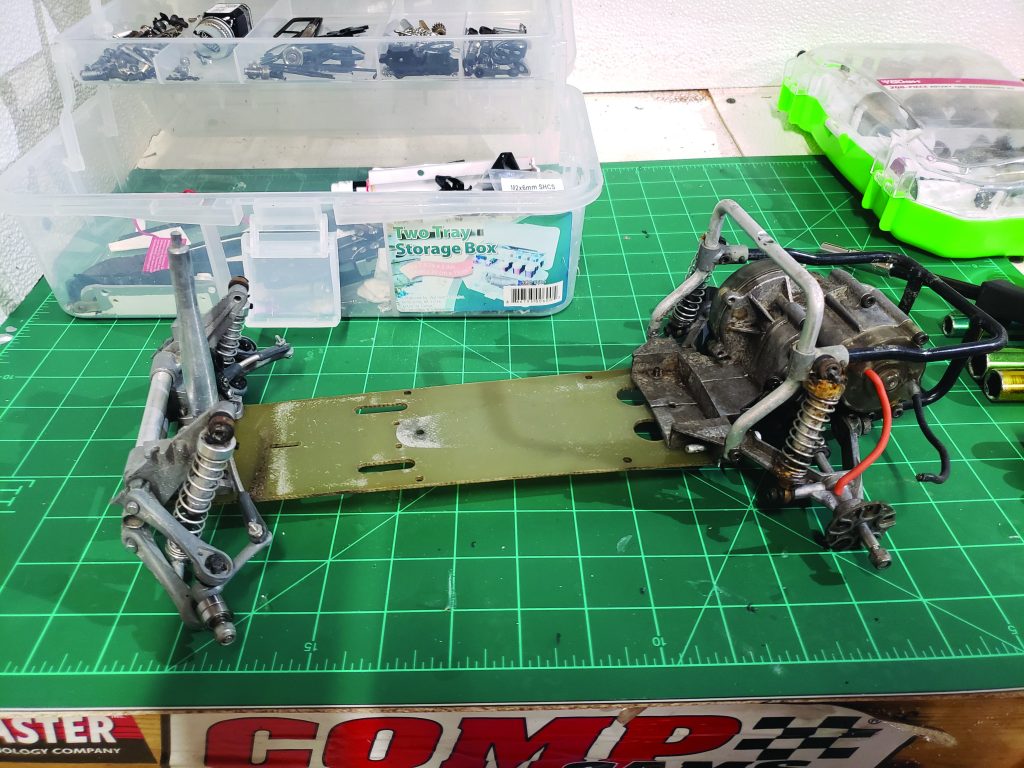 Rob Boone « Waynesboro, PA
Rob tells us this build was inspired by the Black Out POW/MIA Freightliner Classic built by Chuck Timbrook, which makes the photos of the two he took in Martinsburg W.V. all that much cooler. Like the big rig, Rob’s RC rig is a tribute to the US Military and its fallen heroes. The chassis is Axial’s SMT10 monster truck topped by a 2005 Chevy Silverado 1500 from JConcepts. Powerhobby’s 13-turn motor and PH-1060 ESC supply the power while JConcepts Firestorm tires provide the grip—mounted to black tribute wheels with 3d-printed white beadlock rings (also from JConcepts.) Getting the black-out look required Tamiya gloss black paint while the crowning touch—the distinctive graphics—were custom made by Rob’s friend Lauren Armstrong, paired with POW/MIA flags from J.B. Scale Graphics. You can follow the build on Rob’s Instagram page Robs_Rc_World. 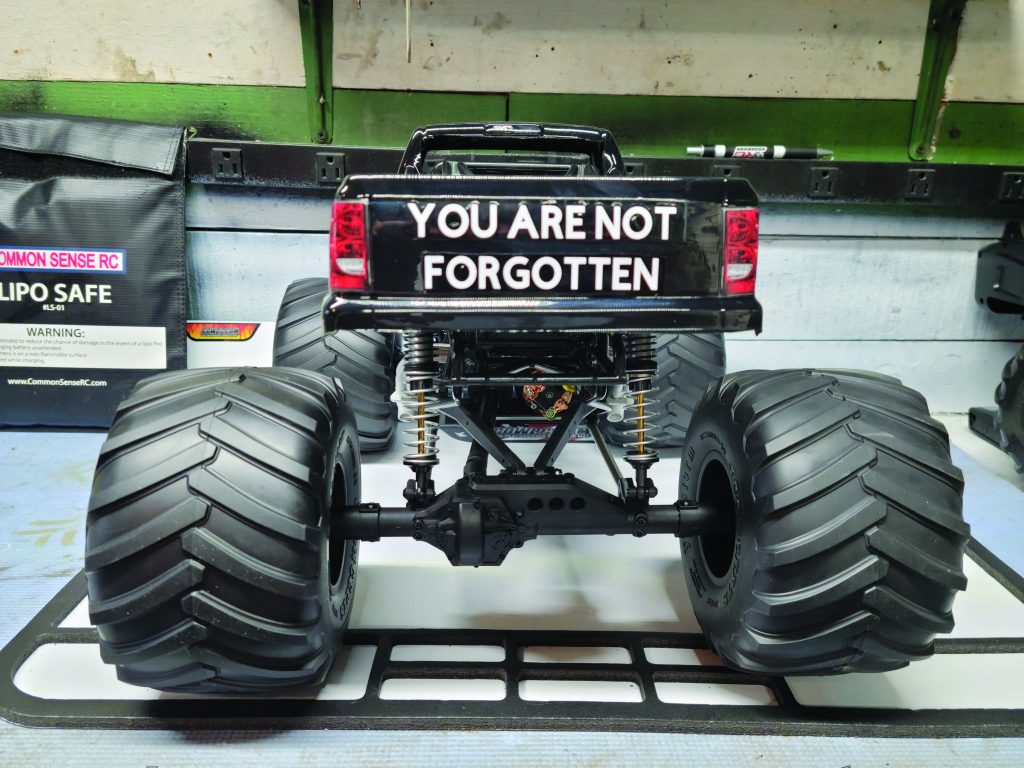 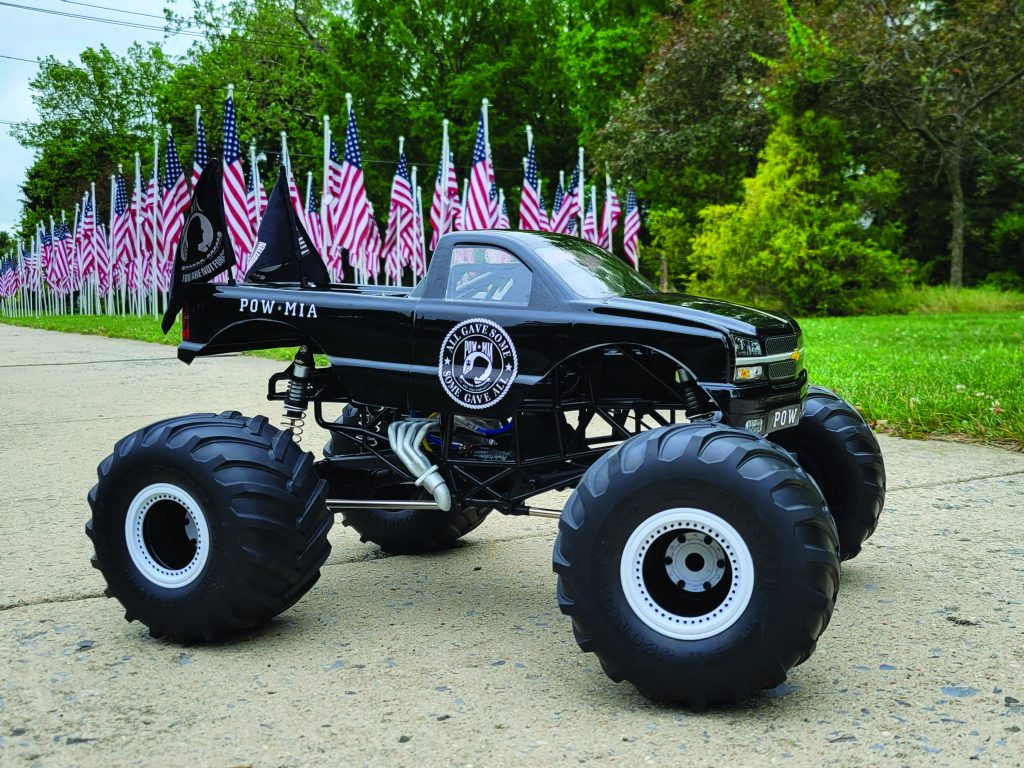 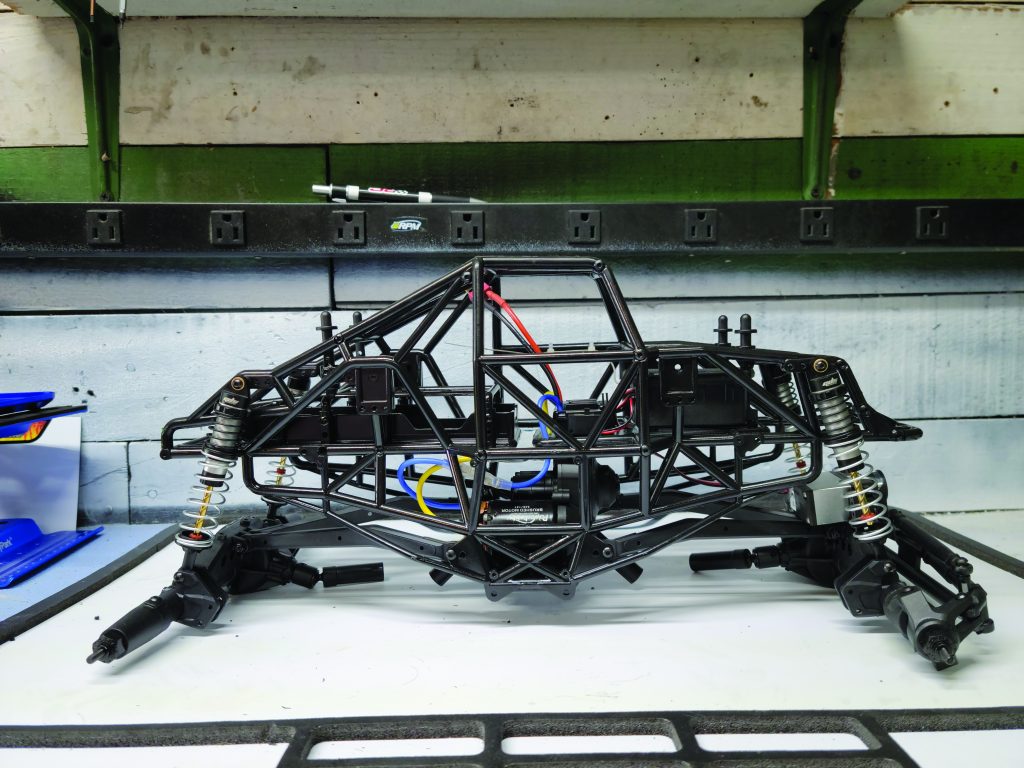 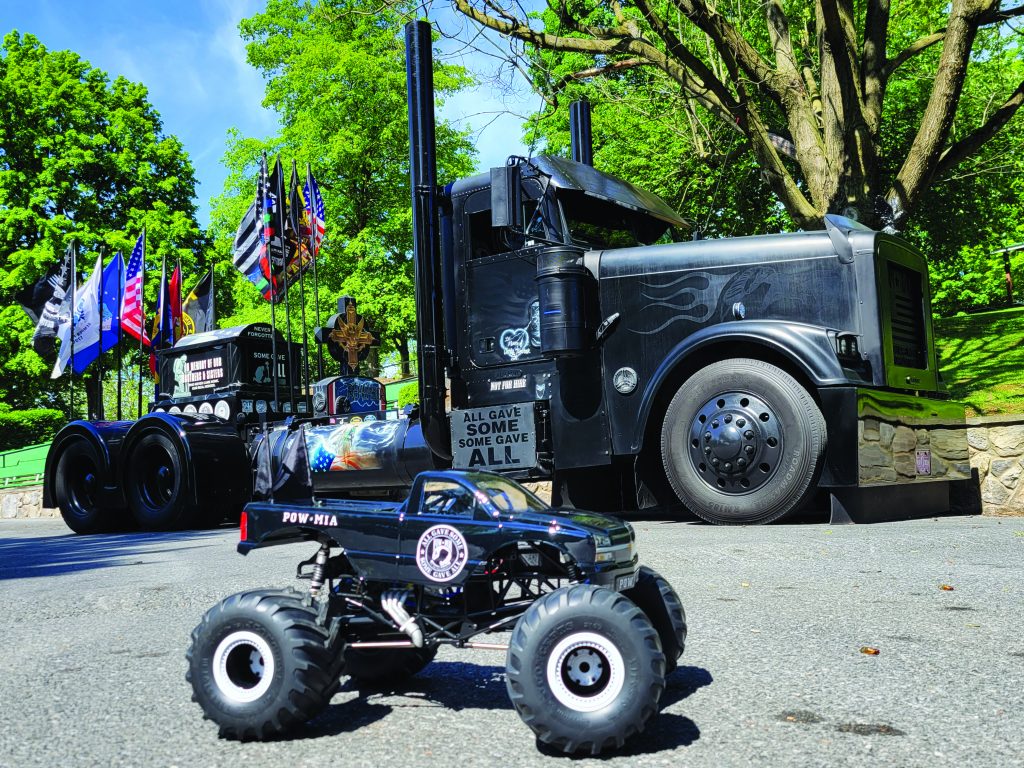 Chase Lyman « HAUGHTON, LA
Chase tells us his truck started off as a lunch break parking lot basher, but that life lasted about a week. While visiting King Cobra RC for a track day Chase was drafted into the 4x4SCT class his buddy was running because the field was one entry short to make a legal race. Chase figured he’d get some practice laps and stay out of the way while the other guys raced it out, but the Baja Rey was fast—fast enough to win! His friend told Chase he wasn’t allowed to upgrade to another platform until it got beat! Chase spent the next few months refitting the Rey to be 4x4SCT legal. The biggest issue was the wheelbase, but Chase found that swapping on Axial Yeti-length trailing arms get him close, and Hot Racing had a set that allowed him to trim the carbon fiber to get the exact length needed. He used Lunsford titanium turnbuckles for the upper links and ordered a custom-length MIP X drive shaft through SuperShafty. He chopped the rear of the cage to match the new wheelbase and then dialed in the rear geometry using drop the forward position of the rear links to yield race-appropriate anti-squat and help traction out of the corners, which is needed with this truck’s 7+ pound weight. Tekno NB48.4 shocks now tame the bumps and jumps, and converted the body mounts to simple Dubro posts to hold an SCT legal body—a Pro-Line Ram 2500 SCT wearing a KustomKoncepts scheme in Chase’s colors so everybody knows exactly who just passed them! Chase tells us he still races it because his buddy who dragged him into the class still hasn’t beaten it. 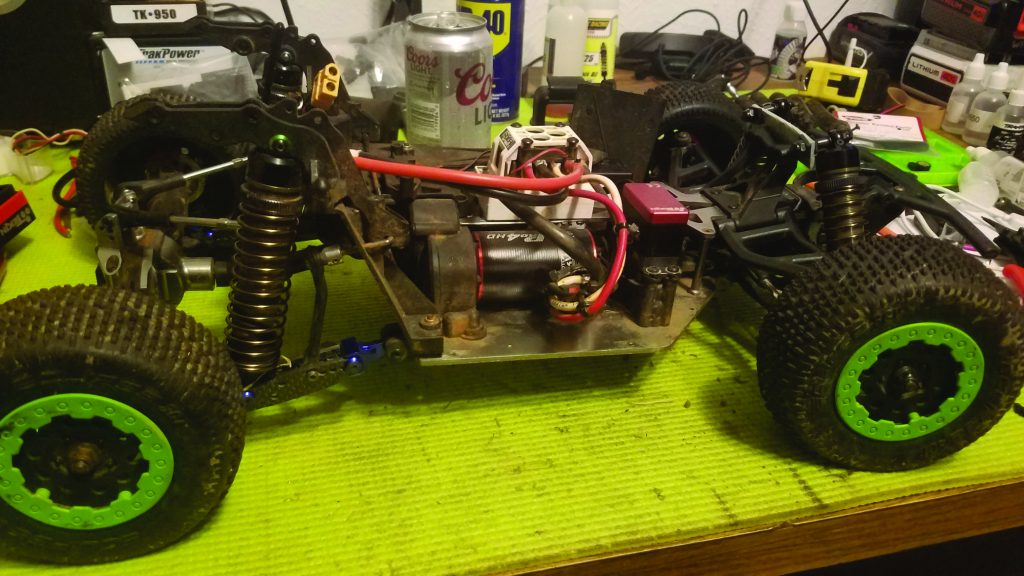 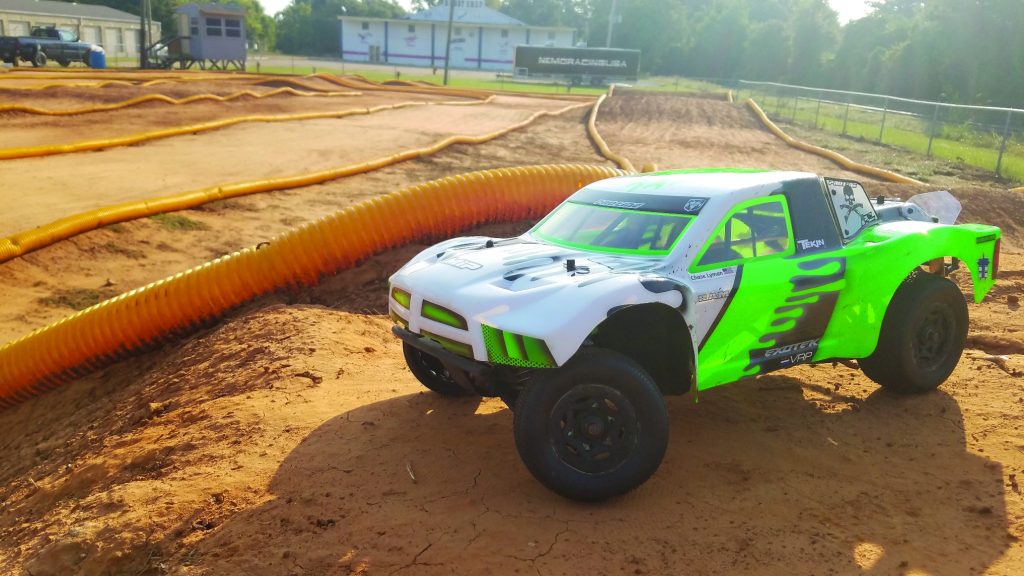 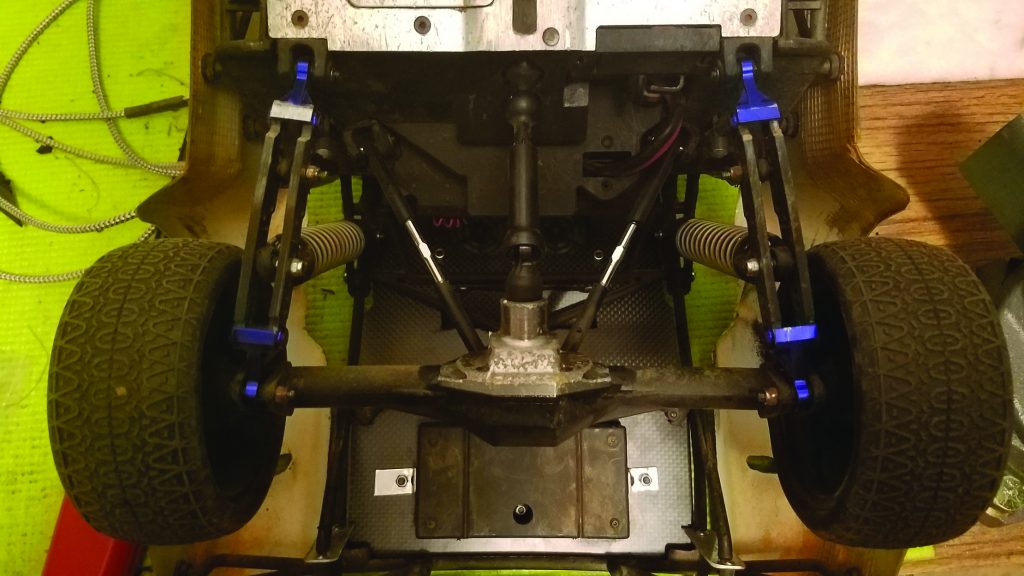 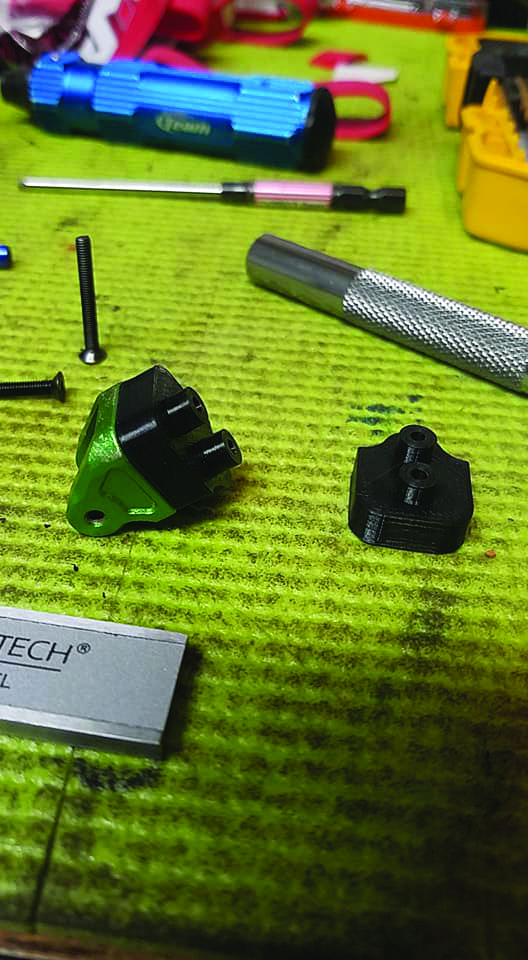 Lucas Crewe « Sevenoaks, Kent, United Kingdom
Lucas originally purchased this truck as the brushed version, but soon upgraded to a Robotronic brushless system. With the extra speed, he then turned his attention to reinforcing the shocks, adding high-lift body mounts and some chrome detailing for the wheels and chassis. To correct its tendency to nosedive off of jumps he vented the rear of the body to reduce lift. He upgraded the servo to a Power HD 20kg to provide additional turning power, which required a custom-made servo box and horn. He can run on 2S or 3S and added a personalized racing transponder. The end result of all his work was a 2019 junior championship in Sevenoaks in his first year of racing at just 11 years old! Lucas didn’t get to defend in 2020 because of the Covid lockdown but as a grizzled veteran of 13 he is looking forward to going racing again this year! 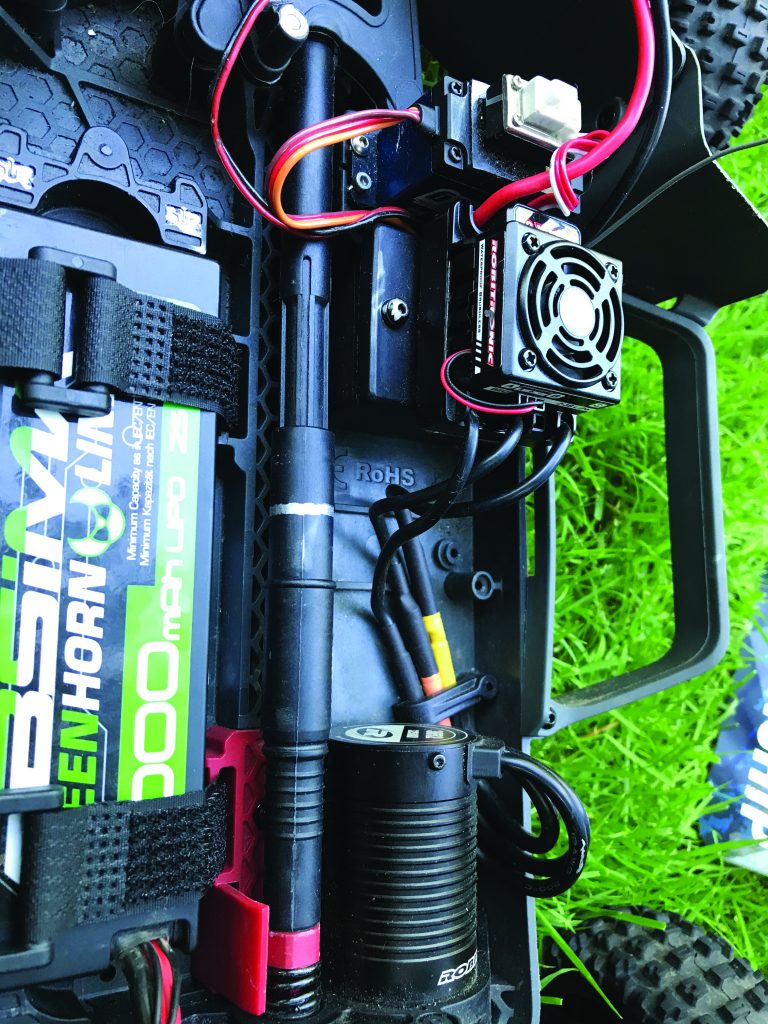 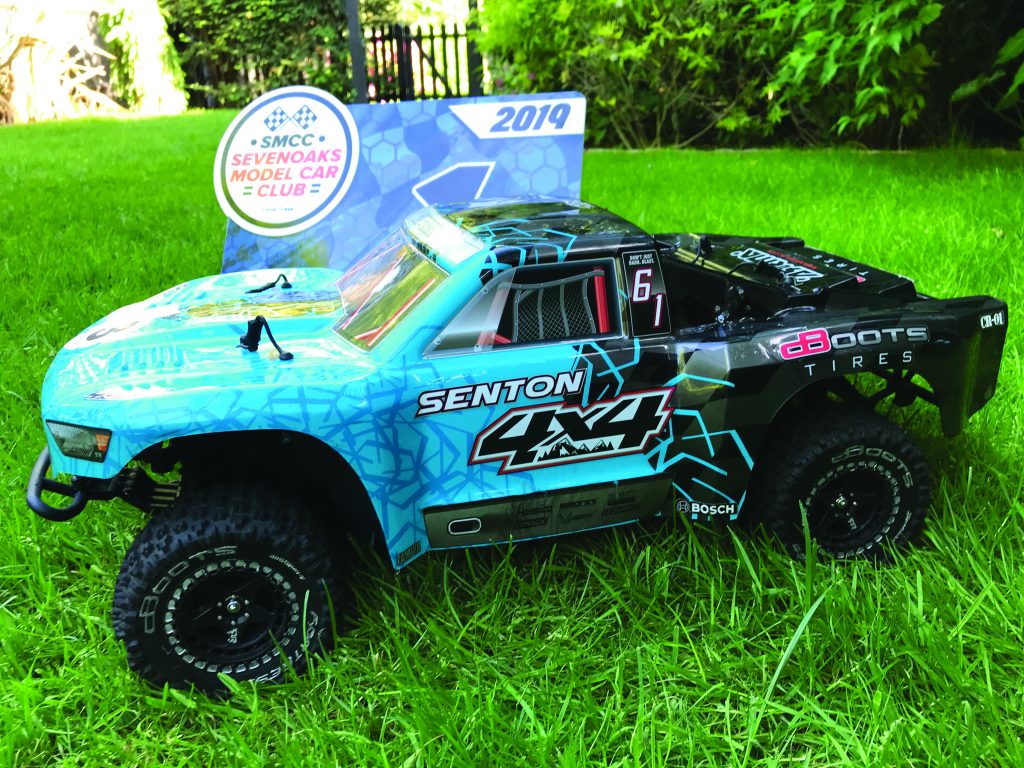 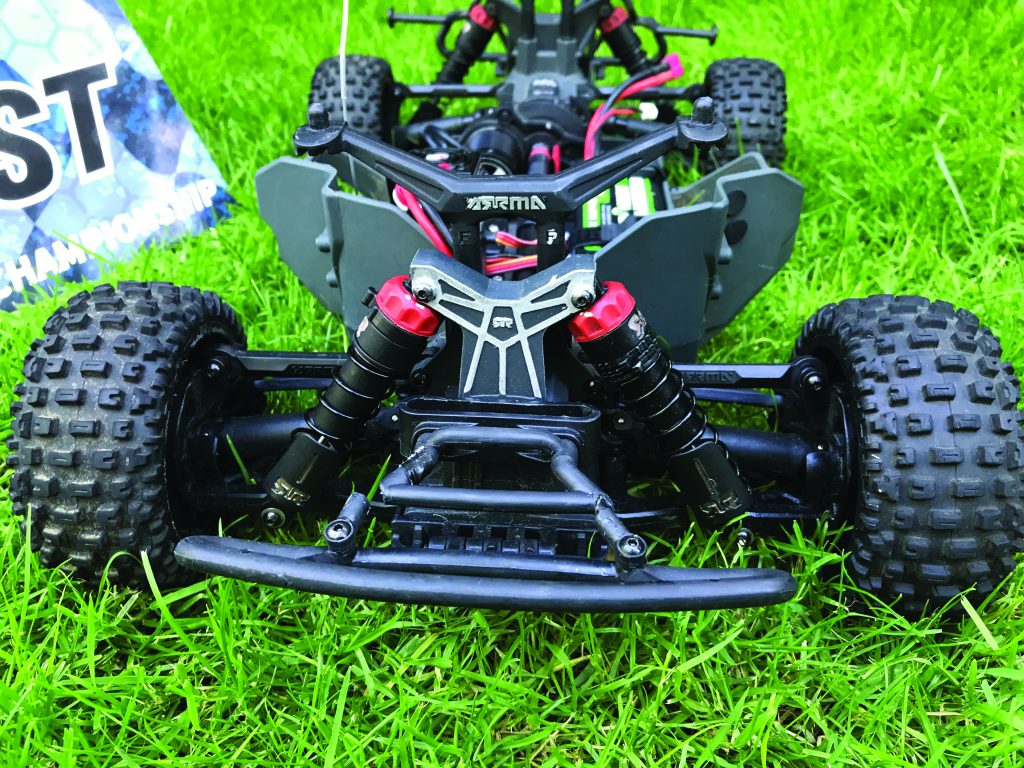 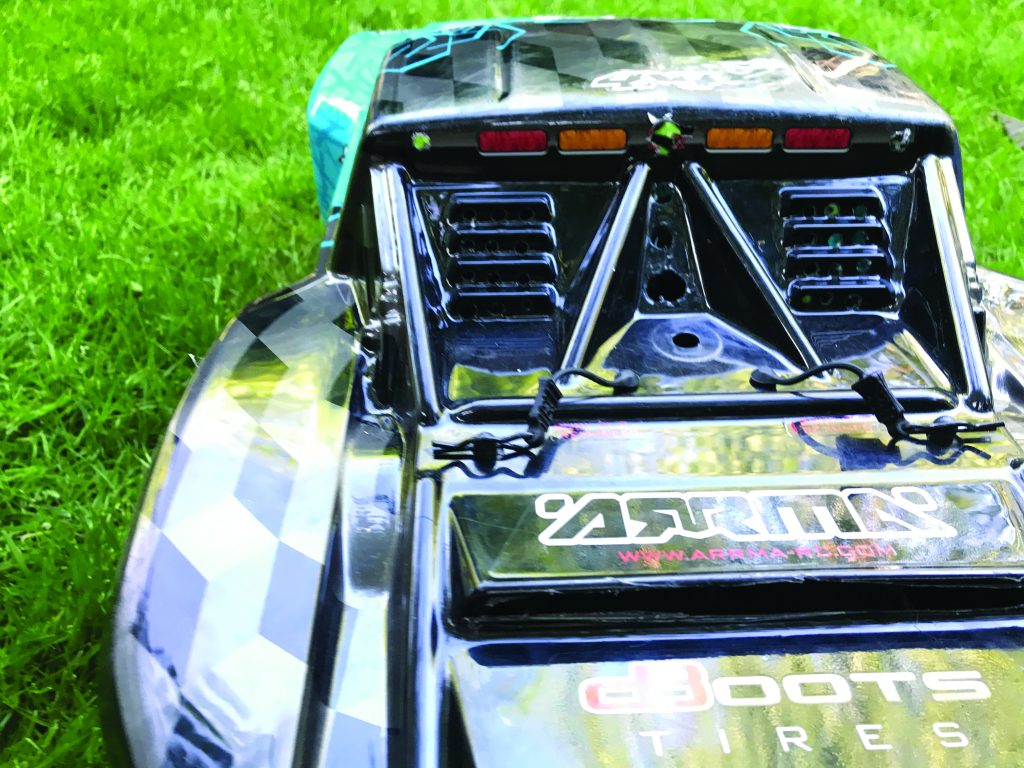