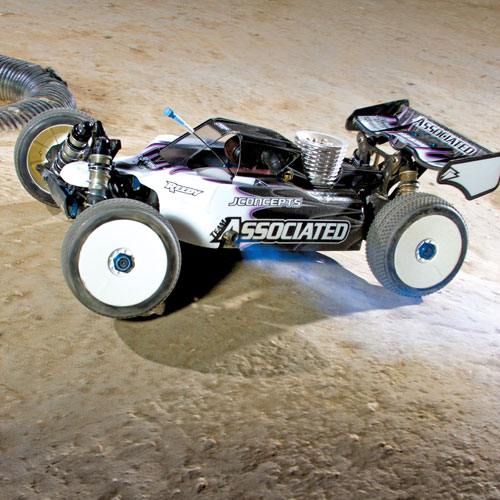 If you’ve ever strolled in to your local track with a new buggy, you already know the drill. Before you’ve run the car a single time, friends attack you with a verbal assault of questions ranging from, “How did it build?” to “So, how is it; is it better than the last version?” Ninety-nine times out of 100, you’d be justified in saying that you have no freaking idea if it’s better. If, however, the buggy in question is the Team Associated RC8.2 Factory Team, you can confidently answer the “Is it better?” question with a self-assured “Yes!” Simplified and revised, the 8.2’s most notable changes are found in its suspension, but there’s more under the surface. Besides, all you need to do is point to the scoreboard; in Ryan Cavalieri and Ryan Maifield’s hands, the RC8.2 finished first and second at the 2011 ROAR 1/8-scale buggy nationals.

PERFORMANCE
After a smooth building experience (minus the fitment problems, see “Pro Advice” for details), I spent several weeks club racing and testing the RC8.2 FT at Revelation Raceway and Hot Rod Hobbies, two of SoCal’s best off-road tracks. I even met with AE hotshots Richard Saxton and Ryan Cavalieri for a full-day test and tune session with the car. Having built and tested all of the previous generation RC8 buggies in the Associated line, I’m familiar with the buggy’s personality … or at least I thought I was. It became obvious during assembly that AE’s designers had redesigned the buggy without throwing the baby out with the bathwater. They retained the buggy’s best aspects while tossing out the ones that didn’t work.
On the track, the RC8.2 FT’s handling can best be described as fast and aggressive. This is a buggy bred and designed for racing, with the skilled racing driver in mind. You don’t have to be Maifield or Cavalieri to make the car work, but you had better pay attention. The 8.2 feels better balanced than any of its predecessors, and nowhere is this more obvious than on bumpy, rutted tracks. Where the last RC8 could get knocked around a bit, the 8.2 has the suspension travel and balance to soak it all up. Where the last RC8 may get out of shape if you landed a jump less than perfectly, the 8.2 falls to the ground like a wet rag. Those new suspension arms and standard shock and sway bar mounting positions do a number on the car’s attitude. It’s as though the old car graduated from etiquette school.
So, what about all of that aggressive handling I mentioned? It’s a high-performance, double-edged sword. On one hand, the new 8.2 steers like a slot car traveling around a hairpin turn. Ask any racer or engineer what they want more of from a 1/8-scale buggy, and they’ll almost always say steering. Yet with the 8.2, you may consider taking some steering out of the car—it’s that aggressive. In fact, Richard Saxton says that several team drivers (who have considerably more driving skill than I) will turn down their radio’s dual-rate setting to take steering away. It’s better to have steering and reduce it than it is to not have enough steering, right? Credit the revised radio tray with its forward-mounted receiver battery, plus the suspension’s revised shock and sway bar mounts, for the buggy’s new attitude. Ask the car to turn, and it turns. Ask it to dive inside a competitor, and it darts into position instantly. But drive like a jerk with too much throttle, and the buggy gets unhappy. There’s a fine line between fast laps and nervous handling. Stay on the correct side, and the RC8.2 FT will be one of the fastest cars on the track.
Durability wise, my test car performed well. No broken parts to report. The front upper suspension arms have received a revision, as shown in our chassis photos; check that your front upper arms have the reinforcement rib along the front side. If not, you don’t have the newest front arms and you risk twisting the stockers. Everything else held up just fine.
VERDICT
When I asked Ryan Cavalieri about the new RC8.2 the day he won the ROAR National championship this summer, he smiled and said “Associated has now given us a car we can absolutely win with.” The buggy’s one-two podium finish certainly is a testament to Cav’s statement. For the rest of us mere driving mortals, the 8.2 is a considerably better buggy than the previous RC8 generations, with better rough track handling and more consistent performance. Though there are a handful of fitment issues with the new car, once dialed-in, the RC8.2 FT is a buggy that is prepared to take advantage of all of the driving skill you can throw at it.