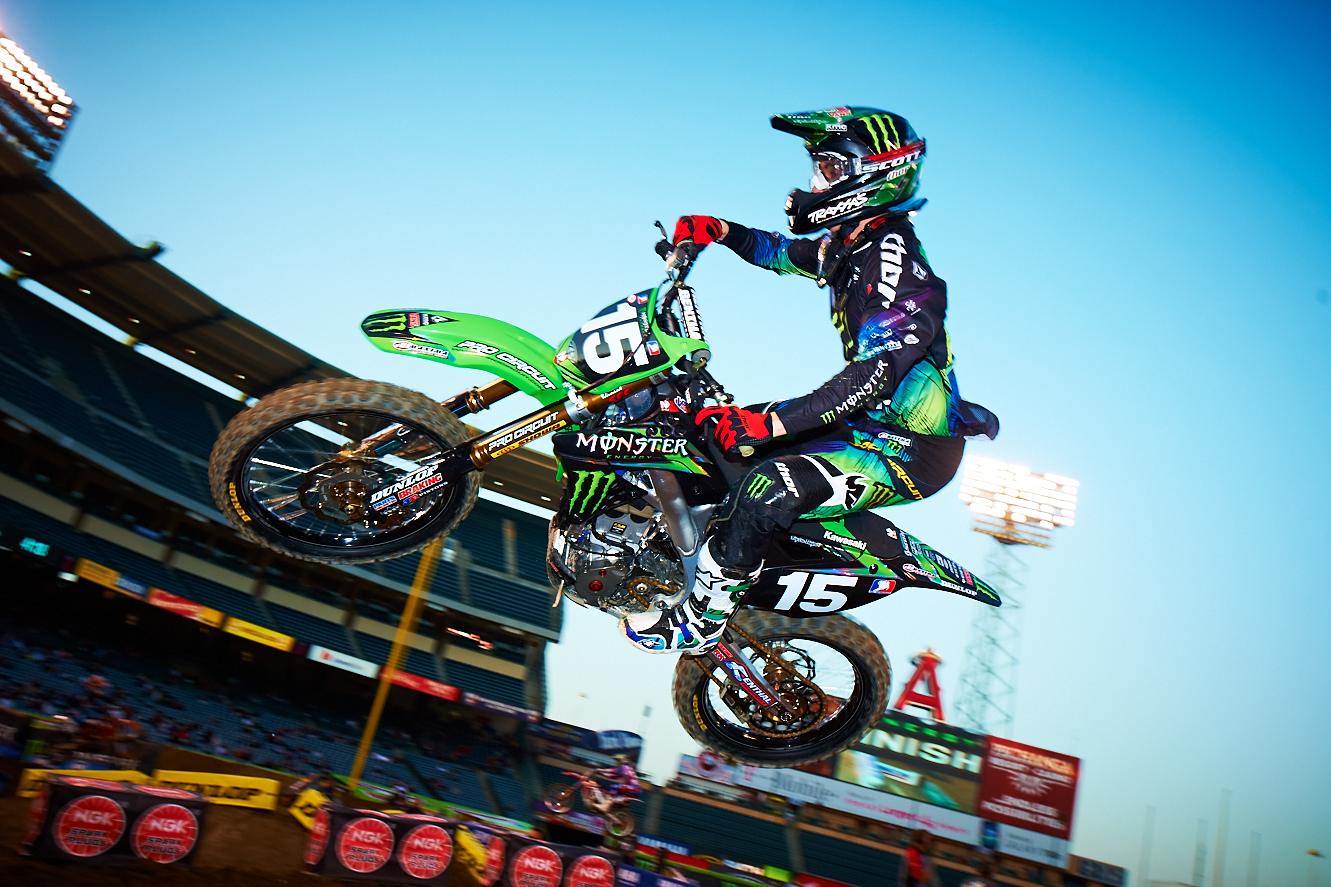 The connection between RC and short course off-road racing was a no-brainer; after all, it’s exactly what we do but on a larger scale. I wasn’t at all surprised to see RC short course trucks sweep through the industry with their combination of realistic looks and entertaining performance. For many of us who have been involved with the hobby since before the short course revolution, the interest crossed over from a different, but still very similar, form of motorsport.

Like many hobby enthusiasts, I’ve been a fan of motocross racing for most of my life – longer than I’ve even known what RC was, in fact. Though there are very different physics involved in controlling a 2-wheeled vehicle versus one with four tires on the ground (especially when you consider one-wheel drive versus four-wheel drive), the concept of closed-course off-road racing still applies. You have to pick and choose your lines in order to best navigate the track’s obstacles, and even a casual observer of both can see the similarities in how racers attack the track, set up passes on rivals, and plan for the later laps of a longer race. Of course, there’s one very real (and important difference) between RC and Supercross, or any full-size motorsport, for that matter: crashes in RC hurt much less.

I wasn’t surprised to see Traxxas, Losi, and Team Associated get involved in the motocross scene by sponsoring teams and marketing their products to motorcycle racing fans; it always seemed like a great fit to me. In fact, Traxxas even sets up a full display and try-me track at each of these races for the thousands of spectators who pack the Pit Party to get autographs from their favorite riders. I interviewed Traxxas spokesmodel Keli Snyder at this year’s race at Qualcomm Stadium in San Diego for Episode 199 of the Radio Control Show.

The spectator experience starts hours before the racing action, with a huge “pit party” that allows visitors to meander between the big rigs and tents that the teams use for a pit area. Several demonstration booths and vendor trucks are scattered throughout as well to make for an interactive atmosphere. 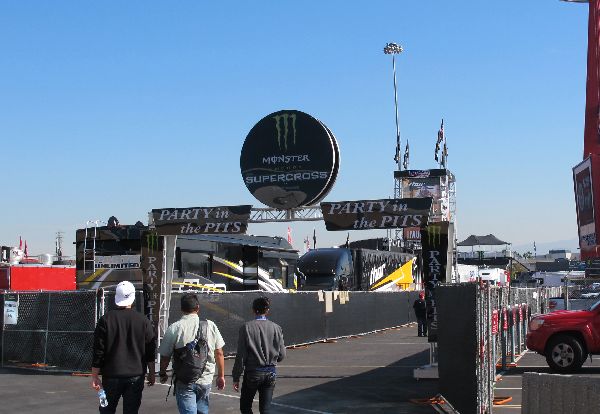 One of the biggest attractions of the pit party is the chance to meet the riders and those behind the scenes. Here’s Tony Berluti, lead mechanic for the RCH/Hart & Huntington Suzuki team. 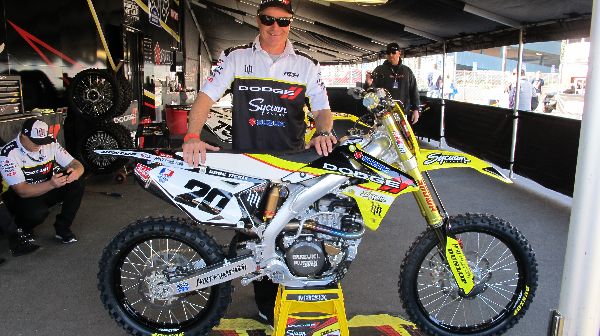 Many of the teams employ spokesmodels to attend the pit party and mingle with fans. They help pass out flyers, organize the autograph signings, and pose for pictures sporting the sponsor logos of the team. 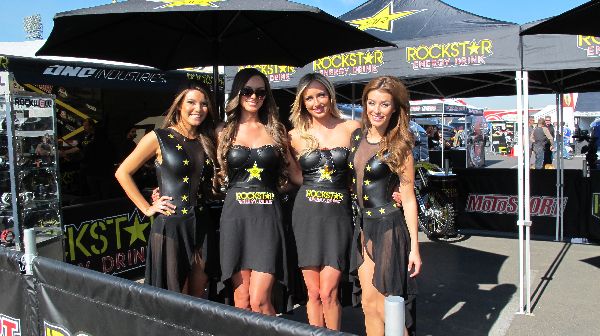 You never know what you’ll find when wandering around the pits. Many riders bring exercise equipment with them to warm up and stay loose between races. 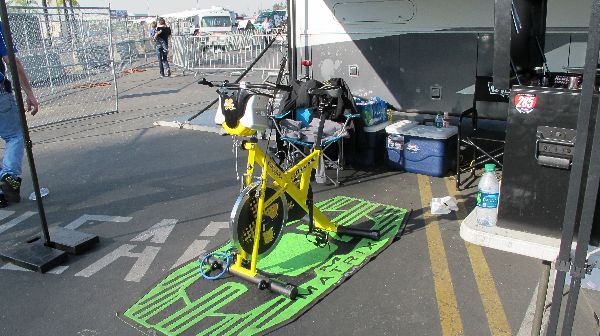 Look familiar? The closed course off-road tracks on which we race our RC cars looks just like a Supercross track, complete with rhythm sections and a mixture of flat and banked corners. Instead of PVC pipe, however, the lanes of a SX course are lined with “tough blocks,” which are heavy chunks of foam padding wrapped in a protective covering adorned with sponsor logos. The blocks move out of the way when a rider hits them to help minimize injury. 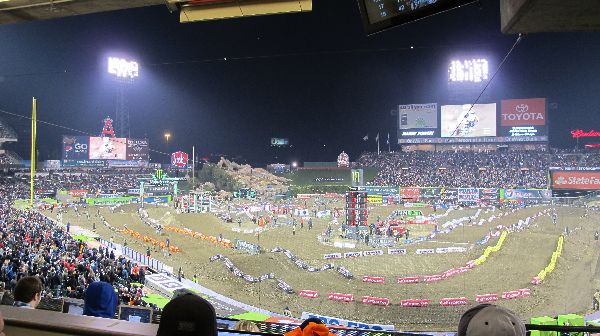 The opening ceremonies at a Supercross race are just as exciting as the racing! With fireworks, blaring music, and a laser light show complementing the dark and mysterious voice that booms through the stadium’s PA system, it’s impossible not to get pumped up before the first gate drops. 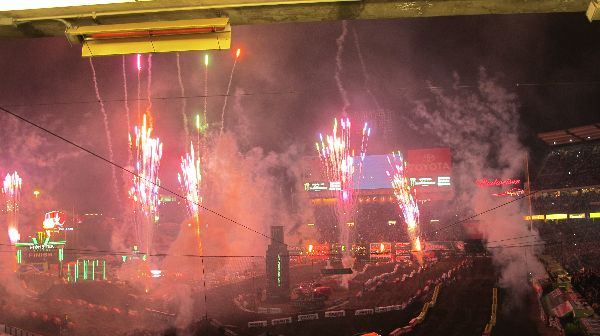 What other motorsports do you think cross over to your interest in RC, and why?