Was there any doubt Traxxas would follow up the debut of the TRX-4’s Land Rover Defender by releasing the platform with other body and wheel combos? No. Would anyone have guessed the second version of Traxxas’ breakthrough trail machine would be an urban-camo’d tactical rig that looks as ready for riot control as it does off-roading? Also no. Whether or not you’re a fan of the look, we gotta give Traxxas credit for doing something unexpected and resisting the urge to put another Wrangler or FJ onto the trail (not that we’re against that). The Tactical Unit looks wildly different than the Defender, but underneath it’s the same TRX-4 that’s enjoying the spotlight as RC’s hottest trail truck. That means portal axles, High/Low transmission, locking diffs, cruise control…all the stuff we loved back when we named the TRX-4 our Truck of the Year. 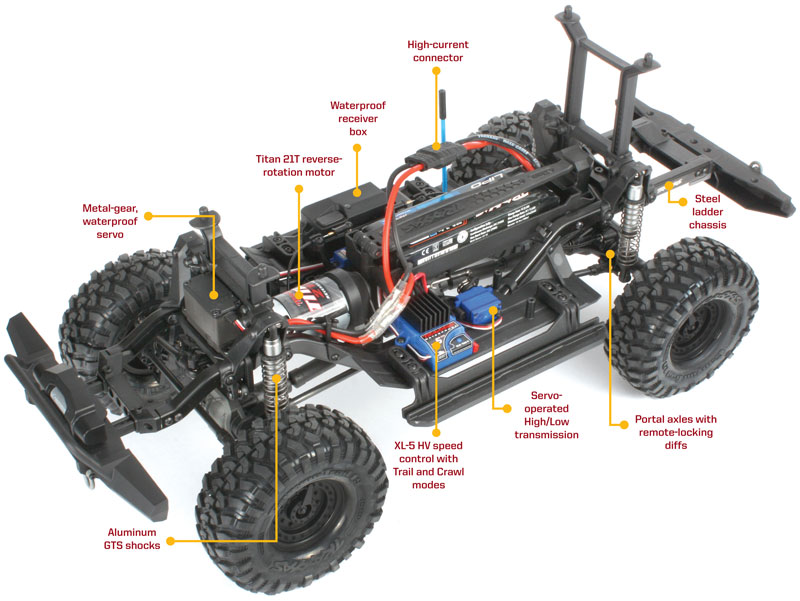 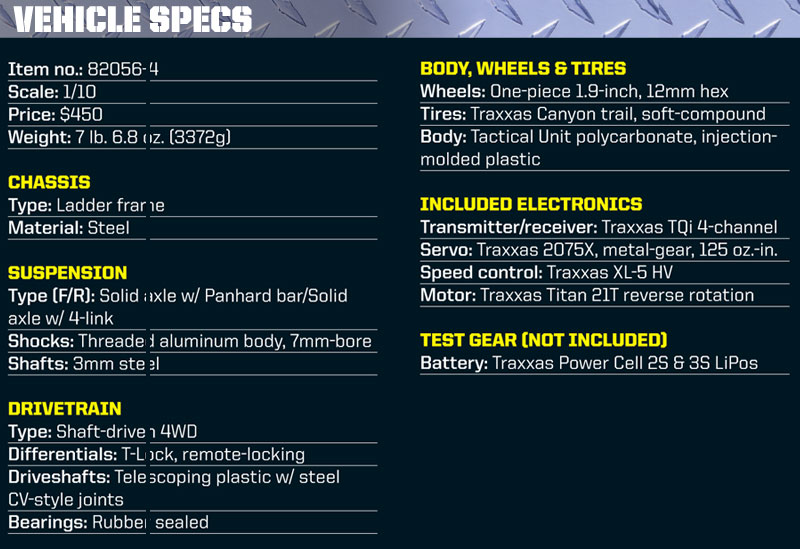 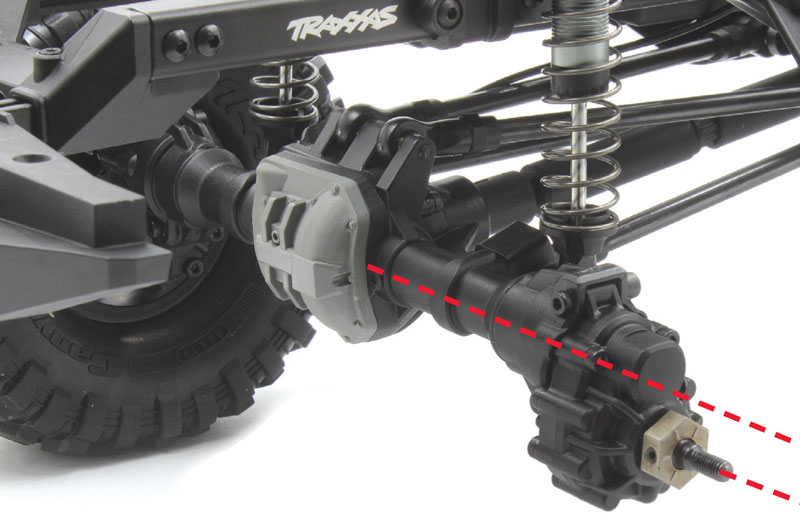 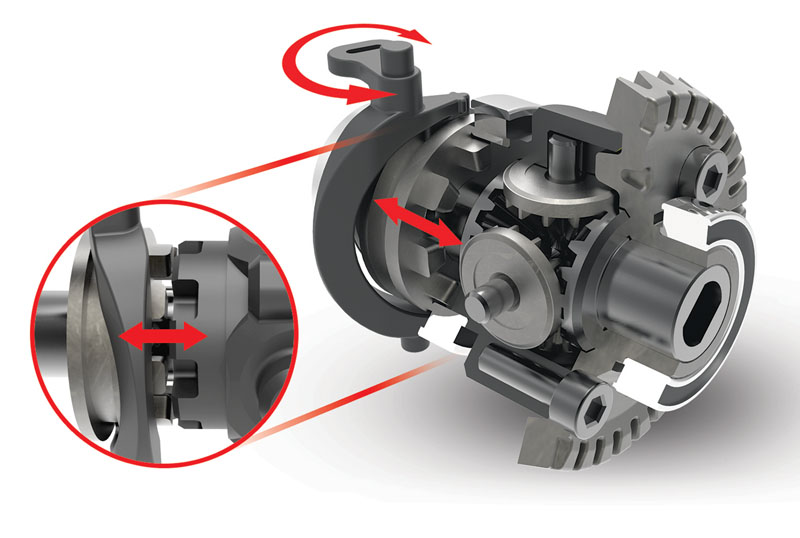 The cable-actuated differentials lock and unlock via dogs that engage the diff case and output gear. 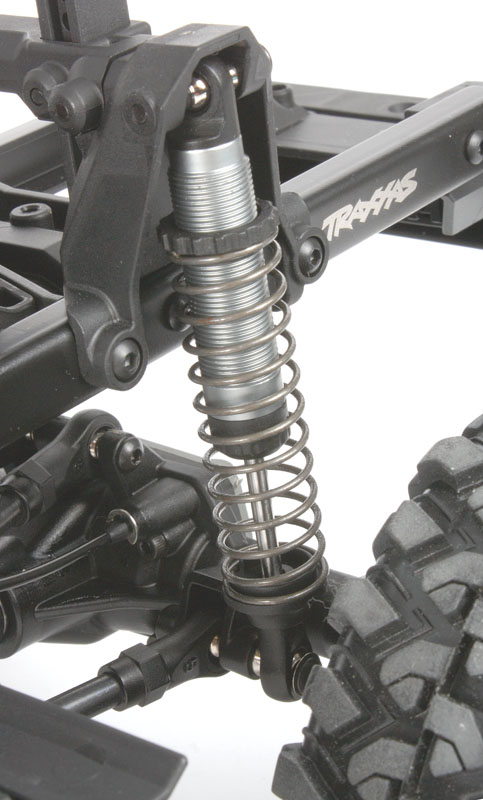 The GTS shocks look scale with their narrow, threaded-aluminum bodies, and the bladderless design is sealed by dual X-rings. 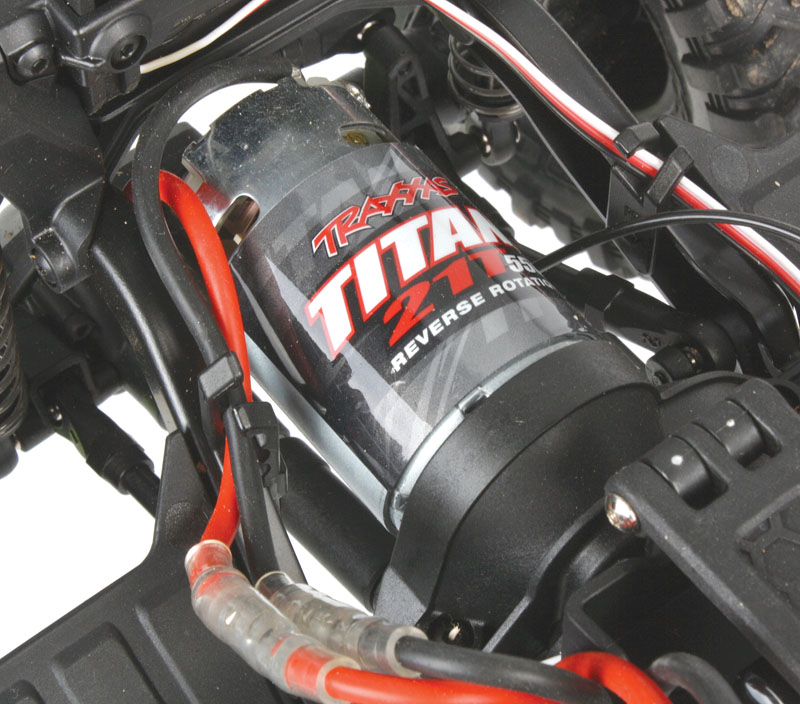 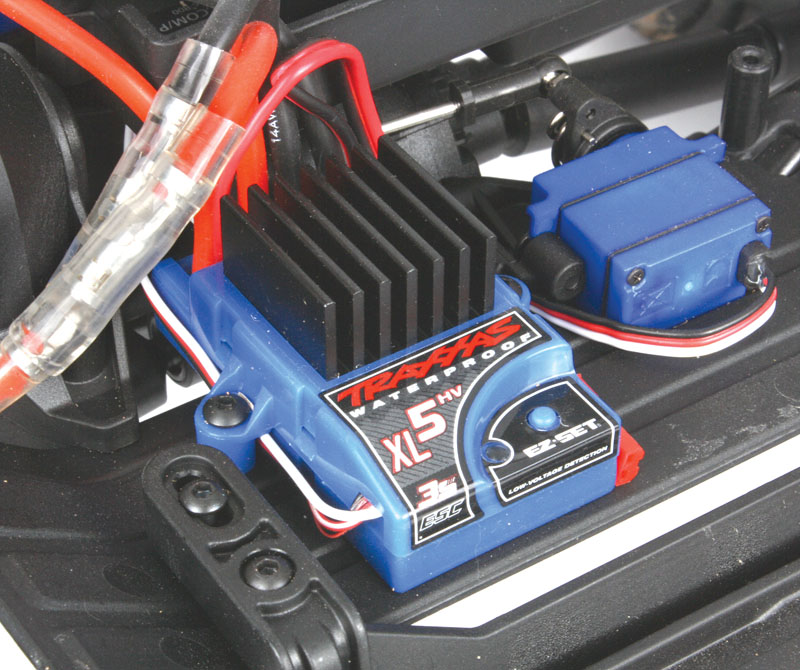 The XL-5 speed control looks like Traxxas’ old standby, but it’s the new “HV” model. It’s built for use with 3S LiPo and has Trail and Crawl modes in addition to the usual Sport, Race, and Training modes. It spins a 21T reverse-rotation motor for ample torque in Low and good speed in High. 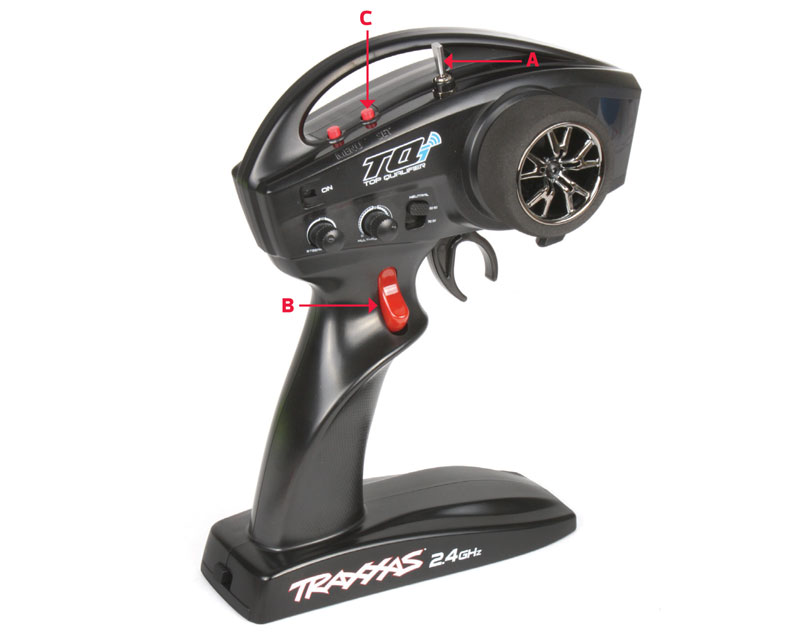 The TQi transmitter puts its extra channels to work to operate the T-Lock diffs (A) and the High/Low transmission (B). Pressing the Set button (C) as you drive will hold throttle position as “cruise control” until you hit the brake. 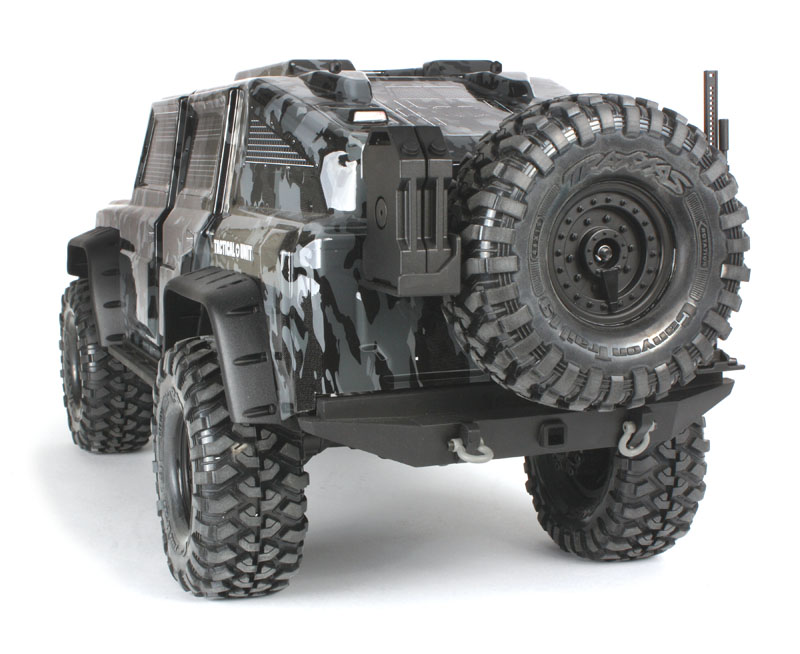 The Tactical wears the same fuel cans and jack as the Defender, but they’re molded in black. The spare tire is functional and can be removed if you want to knock off 3.9 ounces. 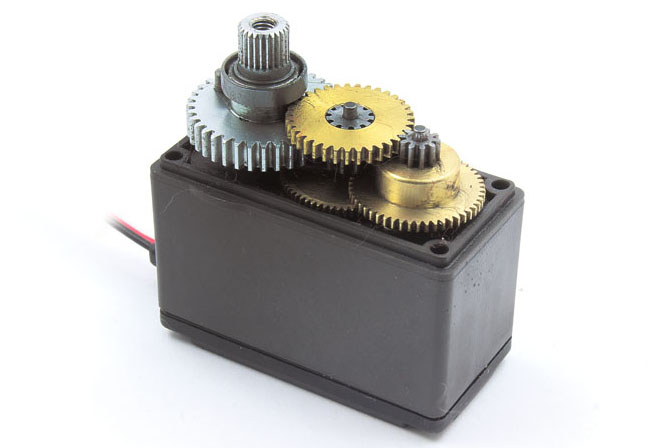 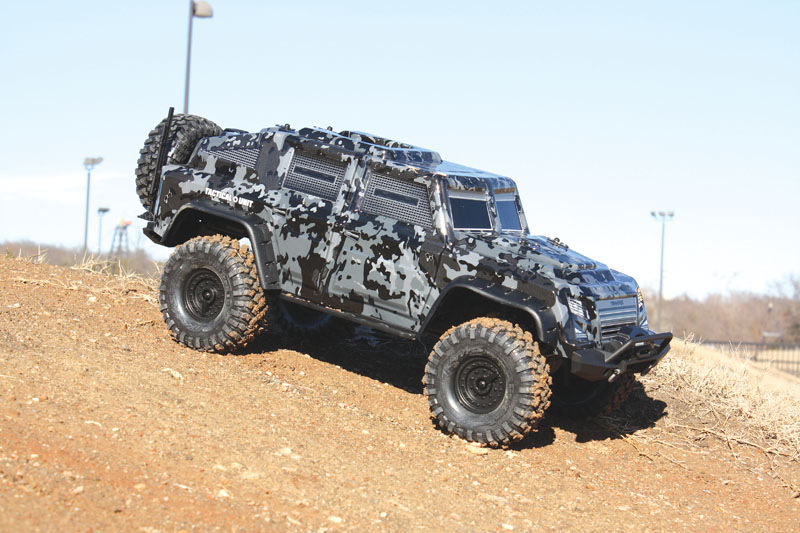 Behind the wheel
I’m a big fan of two features in particular on the TRX-4: the High/Low transmission, and Cruise Control. I’ve got a good quarter-mile hike on flat ground before the terrain at my local spot gets interesting, and while ultra-low gearing is great when it’s time to truly challenge gravity and get technical, it’s a drag when I find myself walking faster than my truck. Shift the TRX-4 into High, and I can let the truck roll out ahead and have some fun on the flats as I make the trip to the rough stuff. When I hit the paved bike-path section (yawn), I just click the Cruise Control on and let my trigger finger take a rest. High gear does deliver enough speed to roll the Tactical Unit in a tight turn, so watch out for that, but the springing and damping offers a realistic amount of body roll instead of flopping too easily on the axle links. In scalelike terrain (and in Low gear), the Tactical Unit is pretty much unstoppable—and that was with the diffs unlocked. I had forgotten I unlocked the diffs when I had the truck in High and only realized it when I pushed the Tactical Unit into more challenging terrain and the front differential unloaded when a wheel was in the air. Click-click, I flipped the T-Lock toggle to lock both diffs and the Tactical Unit kept on rolling. The portal axles are easy to forget about until you realize what isn’t happening: There’s virtually no torque twist under load, and the rocks and roots that should be clunking the diff pumpkins just disappear under the front bumper and reappear under the rear, flanked by tire tracks. The Tactical Unit had no trouble climbing the steep lines I last took with my 2.2-inch rig, and it didn’t feel tail-heavy on the way up. I later broke out my scales and discovered the Tactical Unit carries 49 percent of its weight over the front axle despite the heft of the rear-mounted spare and detail accessories. Removing the spare bumped the front weight to 51 percent. The Tactical Unit felt balanced because it is balanced. I did the bulk of my driving in the default Trail mode, which offers about 20 percent trail brake. Combined with the mechanical drag of the Low gear ratio, this was all the autobraking I needed. In High, the Trail-mode brake slows the truck firmly but not abruptly. I also tried Crawl mode, which delivers 100 percent brake at neutral—useful for the most technical terrain, but it makes for herky-jerky driving everywhere else. Trail mode for the win. 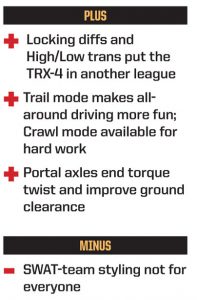 Final Word
As our 2017 Truck of the Year and the winner of our February issue’s trail-truck shootout, it’s no surprise that the TRX-4 Tactical Unit is a lot of fun, highly capable on the trail, and much more versatile than a one-speed, one-mode truck. The Tactical Unit styling seems to split people pretty definitively into “love it” and “not for me” camps, but there’s always the Land Rover Defender version if you’re not down for the urban-pacification look. And if you like ’em both, the lighter Tactical Unit body may give you a slight edge when the terrain really gets tough.