The Trail Finder 2 is one of RC4WD’s most popular vehicles, and there are a few versions of the platform to choose from. You can get it as a kit, RTR, long wheelbase, and short wheelbase, and they all come with the Mojave II body. RC4WD decided to switch things up a bit and offer the Trail Finder 2 with RC4WD’s well-detailed Chevy Blazer body. That’s not the only thing you get! The chassis has RC4WD’s V8 engine with transmission, dual front shocks, aluminum wheels, and more to make the TF2 Blazer stand out from the rest. Let’s take a look at this great-looking machine. 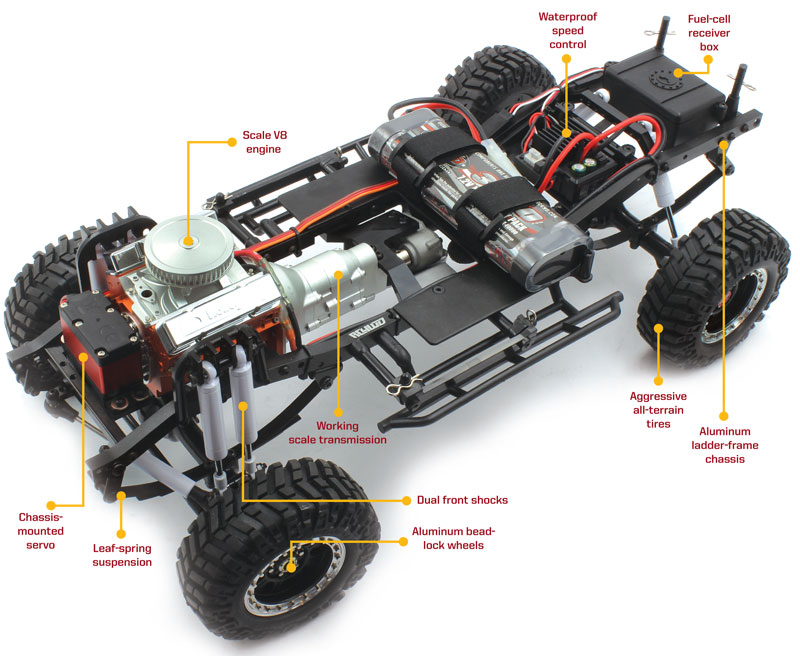 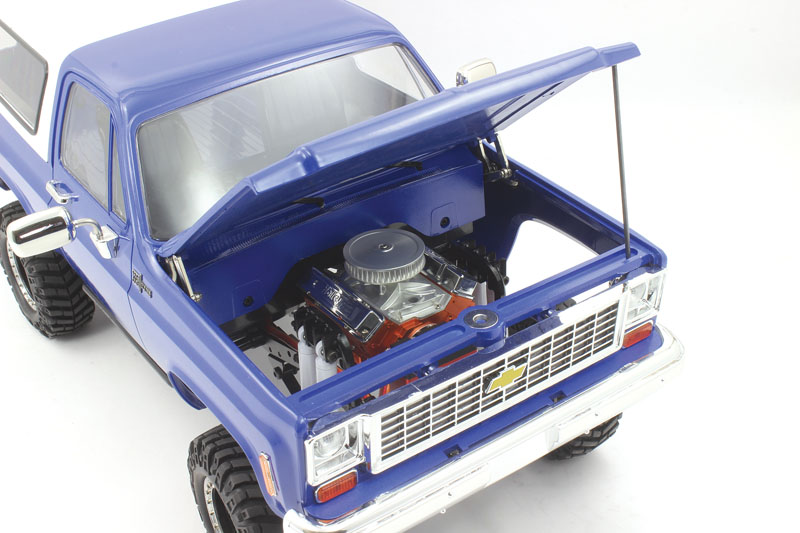 The hood opens to reveal the awesome V8 engine in the chassis, and the rear window on the cap and the tailgate open to give you access to the bed. The cap can even be removed to give the body the look of a pickup truck. 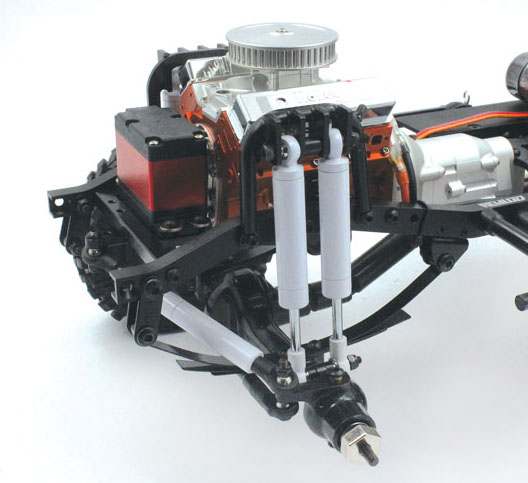 Like other TF2 trucks, this one has a leaf-spring suspension, but this version gets an upgrade to dual front shocks. 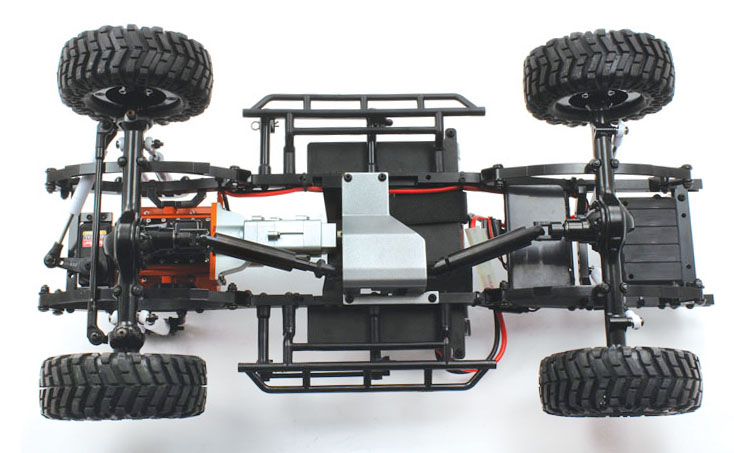 There’s plenty of ground clearance in the center of the chassis, and a heavy-duty steel skidplate protects the transfer case. Left and right rock sliders add to the look of the Blazer and add protection to the body. 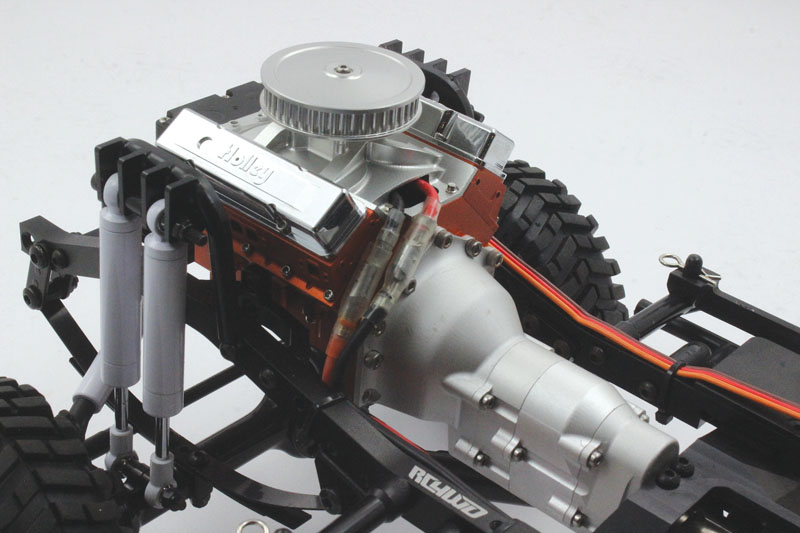 A scale V8 engine is used to hide the truck’s electric motor, and it’s made out of several machined-metal pieces. Behind it is a scale transmission that actually works; there are several small gears inside that get the motor’s power to the axles through a transfer case. 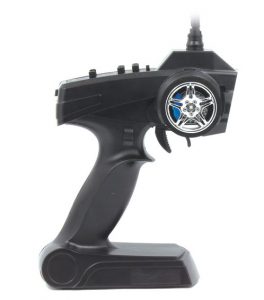 Controlling it all is a 3-channel 2.4GHz radio that is powered by four AA batteries. The AA batteries and a NiMH battery and charger come in the box. 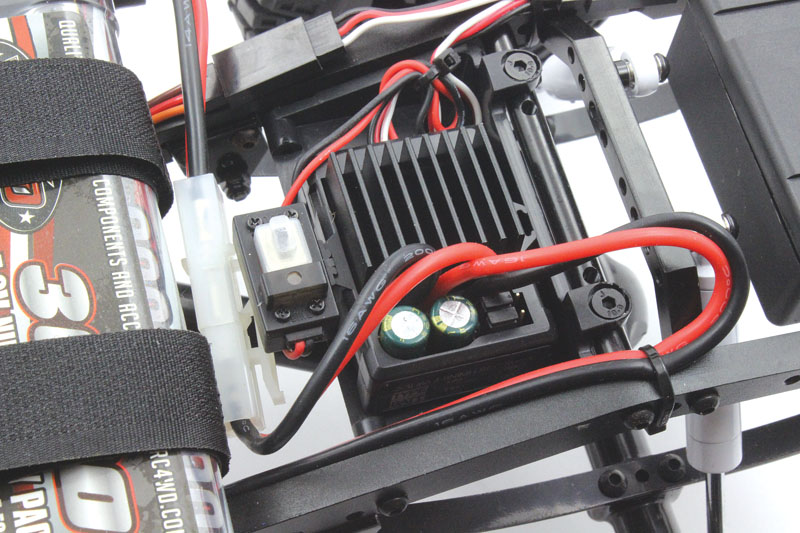 RC4WD’s Outcry II speed control is waterproof, and it can be powered by a NiMH or LiPo battery.

The TF2 Blazer comes with a well-done injection-molded body that comes fully painted and detailed. Removing it from the chassis requires you to take out four 3mm button-head screws from the side of the body and two body clips off the mounts in the bed.

DIALING IN THE TF2 BLAZER
Out of the box, the Blazer is great for light trail duty, but there are a few things you can do to it to improve its performance and make it a little more capable. Here are some tips that I used to dial in my TF2 Blazer.

Remove the shock springs. The TF2 Blazer is heavily sprung, and that keeps the axles from moving and soaking up imperfections like they should. The shocks come with internal springs, which are unnecessary since the chassis has a complete set of leaf springs to support it. Open all the shocks, take out the springs, and set them aside.

Remove the helper springs. Each leaf-spring stack has a helper spring to give it support. Remove those springs to lighten the
springs a bit.

Drive it. Yes, believe it or not, driving the truck will let the springs “break in” and allow them to flex a little better. According to RC4WD, this could take up to two to three hours to complete.

Make the “Chino mod.” This is a popular mod for guys running leaf-spring trucks and improves the axle’s ability to articulate. While looking at the ends of the spring where the screws secure it to the chassis, taper the top of each side of the hole slightly with a grinding bit. This will allow the leaf spring to rotate better from side to side and let the axle swing better.

Get taller tires. This is the only mod (if you choose to make it) that will cost you some money. The tires that come on the TF2 Blazer are pretty small (95mm in diameter, versus 109–120mm for a typical 1.9-inch tire), and that limits the clearance between the axles and the ground. There’s not much room under the body for tires, but you can go up in tire size slightly to get more ground clearance under the axles. They will also do a better job of filling the wheel wells, which will make the truck look a little better.

Reduce body weight. This is something to do as a last resort because the complete body on this truck looks so great. You can remove overall weight and lower the truck’s center of gravity by removing the interior and rear cap from the truck. You can even take off the tailgate if you want to go the extra mile. This reduces the cool look of the truck but will do a great job of improving the performance of the truck.

Leave the battery loose. Installing the body is also difficult with the battery securely strapped in place because the bottom of the interior comes in contact with it. I found that if you leave the battery straps loose, it allows the battery to move back slightly to get out of the way, and that lets the body sit in place properly. 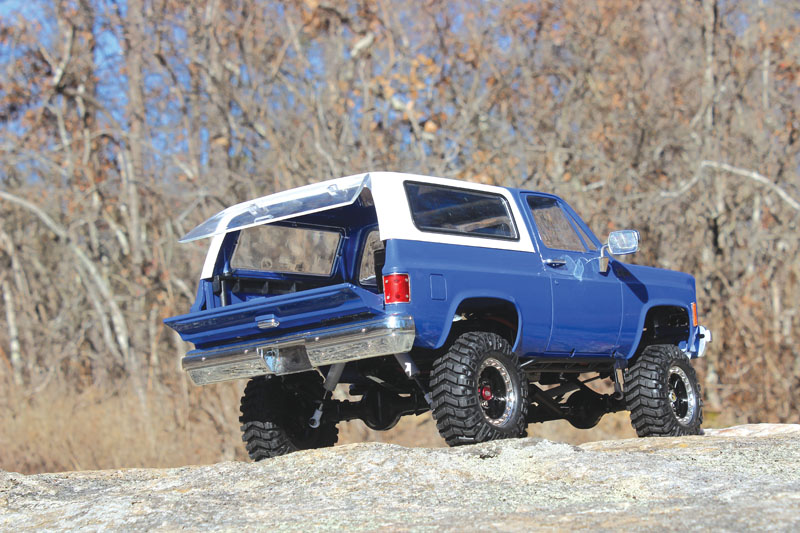 Behind the Wheel
The Blazer’s suspension is pretty stiff out of the box, so I decided to take it to a trail that has more scale terrain that would complement the Blazer’s setup. Getting the battery installed took a little longer than it does on other trail trucks because of the screws that are used to mount the body on the chassis. After a few minutes of removing screws, installing the battery, and installing screws, I was ready to go. The suspension is pretty stiff and the body is heavy, so my expectations when it comes to performance were low—which is fine because this truck is more about being ultra scale than attacking a comp-ready course. The top speed is good for a trail truck: not so fast that I couldn’t keep up but not so slow that I had to slow myself down. While making my way to some rocks, I hit a patch of roots and I made my way over them. The suspension didn’t move much, but the tires provided great grip and were able to get the truck over the roots with a little bit of work. The high ground clearance of the TF2 chassis and its smooth bottom also helped and let the truck slide right over any roots in its path. On the rocks, the Blazer’s high-grip tires and low 31.9:1 gear ratio pulled it along well. The chassis weight is well balanced in stock configuration, with 52% of it in the front and 48% in the rear; even though it could use a little more weight up front, I was still able to attack some pretty steep inclines without the front end lifting. Attacking the rocks at an angle, however, was a little troublesome in some areas because of the lack of movement from the suspension and up-high weight of the Blazer body. The outside front tire wanted to lift from time to time, but I was able to quickly back away and keep the tire from lifting too much and having the truck roll over. While bench testing the TF2 Blazer, I found that there’s a good amount of bump steer when you compress the suspension with your hand (RC4WD is making a running change to fix this), and I thought that it would be an issue. But in stock form, the suspension doesn’t move much, so there were no real bump-steer issues on the trail. After a while behind the wheel, I took the truck home, made some adjustments (see sidebar), and then headed back out for more testing. The capability of the Blazer—and the fun—improved greatly; the suspension was able to conform to obstacles better, the bump steer was basically gone, and I was able to attack the rocks a little more aggressively. The improved articulation and weight that I added up front allowed the Blazer to get over those steep rocks that were a bit of an issue earlier. This time, I was able to climb up some of the steeper rocks at an angle without the truck flipping over and ruining that great paint job.

Final Word
When it comes to looks, the RC4WD TF2 Blazer is, hands down, one of the most scale trucks that you can buy. I really like the Blazer body and its impressive scale detail, but I feel that the tires are a little small when it comes to the overall look of the vehicle. The stock suspension is pretty stiff, but the good news is that it didn’t hinder the truck’s performance much and you can make some no-cost mods to improve it if you choose to do so. RC4WD also offers a lot of option parts, which you can use to make the truck your own. What’s happening to my truck? I’m going to get some larger tires, and that’s about it. It’s a great-looking piece that will be great on my shelf and fun to bomb around the yard with from time to time. If you’re going to pick up one of these trucks, make sure you get on it fast because it’s a limited edition. 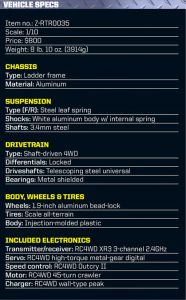