From JConcepts:
JConcepts made the trip up to Diggers Dungeon for the 12th annual No Limit RC Monster Truck World Finals. The event once again was held over Memorial Day weekend. With over 600 trucks entered it was long days and nights of racing. The Anderson family was out racing their JConcepts equipped Axial SMT10’s all weekend long.

Dennis Anderson also took some time out to talk about the history of the Grave Digger truck after receiving a full blown replica to help celebrate the 35th anniversary. The truck was equipped with the new JConcepts 1951 Ford Panel Truck “Grandma” body, courtesy of Fred Reep and JConcepts.

A brief history of the Grave Digger Monster Truck…

Grave Digger was originally conceived in 1982 by Dennis Anderson as a mud bogger. This first truck was a red 1952 Ford pickup truck. Later on a silver and blue 1951 Ford Panel Truck was his new mud truck that would become the first Grave Digger monster truck. The truck received its name when Anderson, amicably trash talking with his fellow racers, said the now famous line, “I’ll take this old junk and dig you a grave with it”, a reference to the age of his old pickup in comparison to their relatively modern trucks. Anderson gained a reputation for an all-or-nothing driving style and quickly became popular at local events. At one show, a scheduled monster truck failed to show up and Anderson, who already had large tractor tires on the truck, offered to crush cars in the absence of the full-size monster. The promoter accepted and Grave Digger was an instant success as a car crusher and led Anderson to leave mud bogging and pursue monster trucks instead.

In 1986 Grave Digger underwent a transformation to complete monster truck and first received its famous black graveyard paint scheme. In 1987 and 1988 Anderson drove the truck primarily at TNT Motorsports races and became a crowd favorite for driving hard despite lacking major funding that more well known teams, like Bigfoot, had. In 1987, Anderson beat Bigfoot in Saint Paul, Minnesota on a show taped for ESPN. It was the first major victory for Grave Digger.

Anderson moved to Grave Digger 2 in 1989, with a new 1950 Chevy panel van body. It was during this time that the reputation for wild passes was developed, and the popularity of the truck increased. TNT recognised his rising popularity and began promoting Grave Digger heavily, especially for races on the Tuff Trax syndicated television series. This was helped by Bigfoot not racing for points in the 1989 championship, leaving Grave Digger as the most popular truck on the tour.

When TNT became a part of the United States Hot Rod Association in 1991, Anderson began running on the USHRA tour and debuted his first four-link truck, Grave Digger 3. Throughout the 1990s, the popularity of the truck grew and forced Anderson to hire other drivers to run other Grave Digger trucks. Grave Diggers 4, 5 and 8 were built to suit this purpose, and were never driven in any major capacity by Anderson. Anderson drove Grave Digger 7, a direct successor to 3, for most of the decade. It was replaced by Grave Digger 12, well known as the “long wheelbase Digger”, which was also the first Grave Digger with purple in the paintjob. 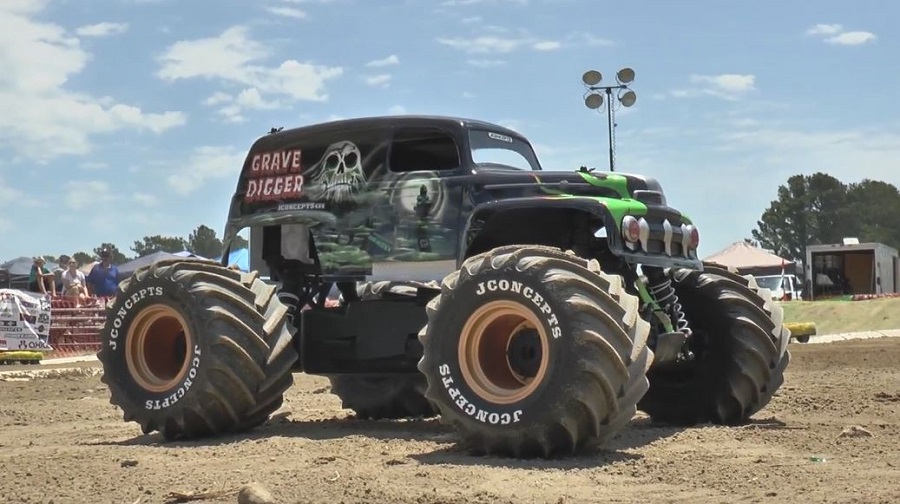