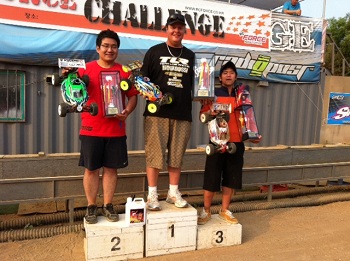 The 2011 RC Force Challenge took place the weekend of June 18-19 2022 and was hosted by Ansan Jungwong Circuit.

The facility had containers for racers to pit in, car cleaning station, snack bar, and two tracks. One for 1/10th racing and a larger track for 1/8th nitro racing. When the racing was finished there were lots of free giveaways to racers and spectators which included everything from airfilters to engines and signed wheels and a signed body from Adam Drake (“아담” – Adam’s Korean name). Everyone played rock, paper, and scissors to determine the winners of the prizes.

Congratulations to Adam on winning the event along with JJ and everyone from RC Force for hosting an amazing event.