RC Landrover Expeditie (Expedition) Team Benelux is an RC group based in Belgium that is devoted to scale off-road adventuring. Organized by Bart Bronckart, creator of the website rc-fun.be, and built around the motto “More Scale Is More Fun,” the group held its first annual RC Camel Trophy Benelux this past August, patterned after the famous Land Rover–exclusive endurance event. It was open to scale trucks replicating the famous original LRs like the Defender 90 and 110. They built a 300-square-meter adventure parkour, complete with narrow single tracks traversing scale rope and log bridges, climbing hills, cresting sand dunes, and fording river crossings. 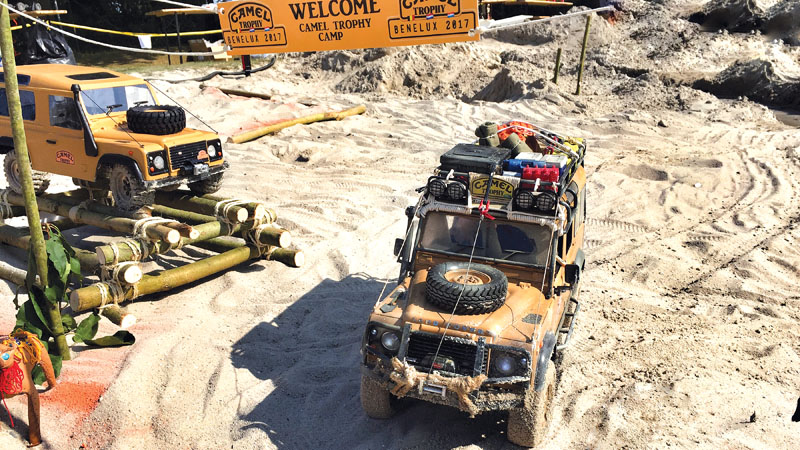 A signature element of Camel Trophy trucks is the roof rack overloaded with survival essentials.

Many of these challenges were all new for the collection of Belgian and Dutch RC drivers who entered with an impressive collection of scale Camel-themed LRs. And because these guys believe that the “Hand of God” is for wimps, fellow team members were often called upon to help each other out with winches, chains, sand plates—all the techniques Camel Trophy competitors relied upon in the original full-scale events. In at least one case, three LRs were needed to drag out a fellow competitor who had gotten stuck in the sandy river! But no man was left behind—all participants finished as a team, new techniques were learned, and many new friends were made, making the first annual event a huge success. They plan to run the event again next year, and the group runs several other ambitious events throughout the year. Check them out at rc-fun.be and on Facebook/RC Landrover Expeditie Team Benelux. And huge thanks to Bart Bronckart for the amazing photos and the info about the event. 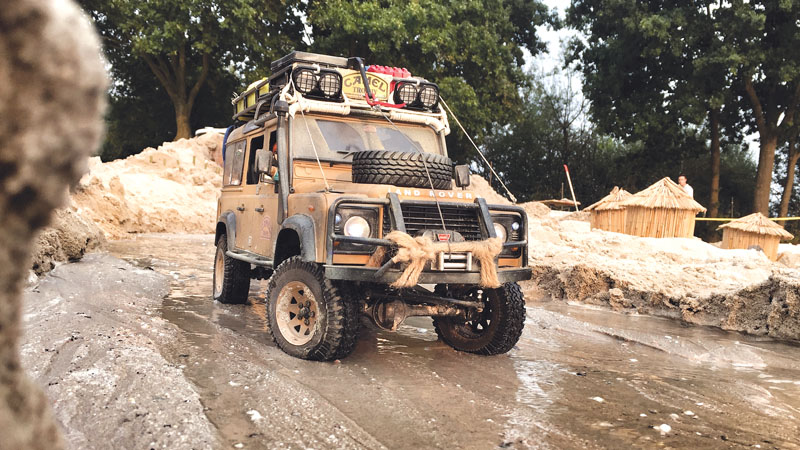 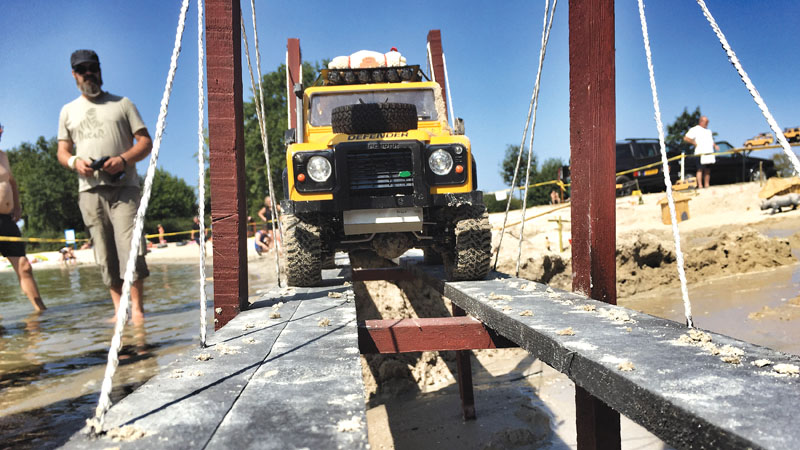 Both short- (90) and long- (110) wheelbase Defender models were well represented. 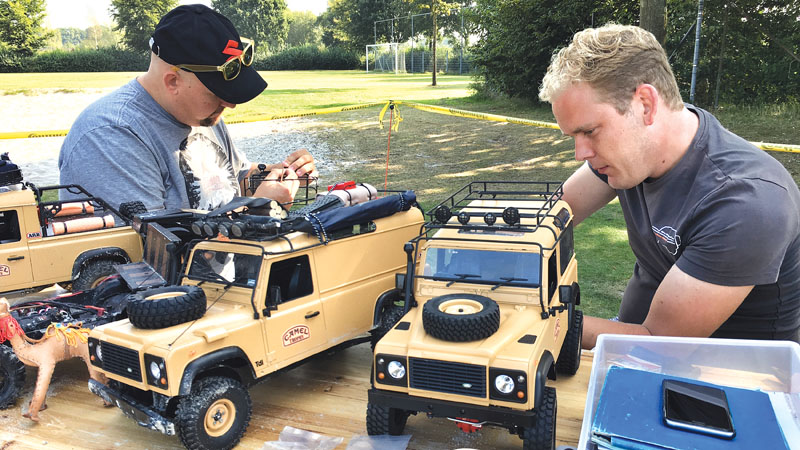 The event drew competitors from Belgium and the Netherlands with an impressive array of trucks. 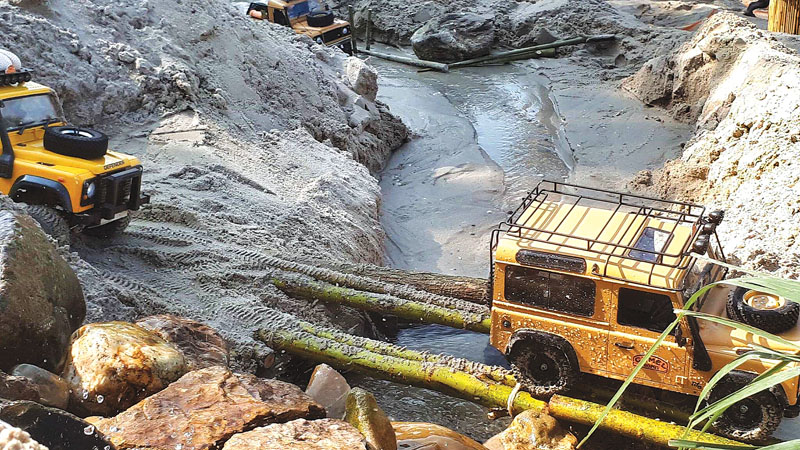 Technical skill was required by drivers to negotiate a variety of challenging obstacles. 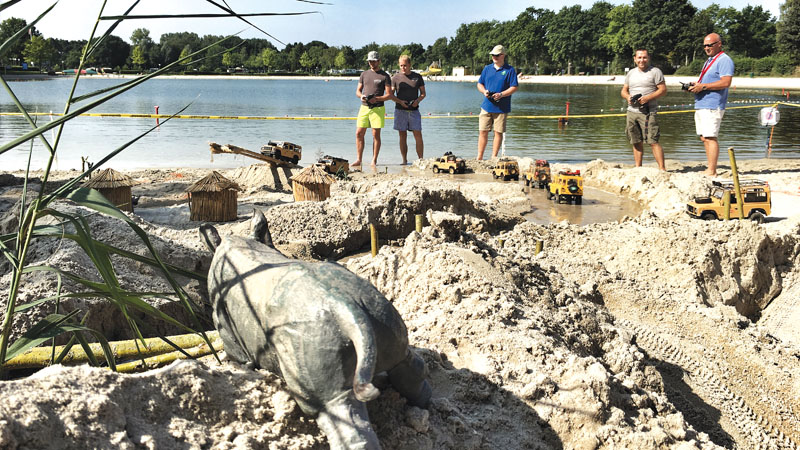 The club had beautiful weather for its picturesque venue.

The Camel Trophy: The Fiercest 4X4 Events Ever Run
During its two decades of existence (1980–2000), the Camel Trophy developed a reputation as the ultimate test of off-road endurance and ingenuity for man and machine. The annual event visited some of the most ridiculously inhospitable locations on the planet—places like the Amazon, Borneo, Tanzania, Siberia, Mongolia—many of which had never been traversed by land vehicle before, requiring heroic efforts by competitors and vehicles just to finish. The first year featured a handful of Brazilian-built Jeep CJs, but thereafter the Camel Trophy became the exclusive showcase for Land Rover, which supplied essentially stock Range Rovers as well as various Defender 90, 110, Discovery, and even Freelander models for team competition and support vehicles. Land Rover would continue to cosponsor the event and provide vehicles through 1998. During those 18 years, images of LRs in Trophy-specific “Sandglow Yellow” paint and with roof racks piled high—sandblasted, mud-caked, dented, drowned, or buried up to their door handles, battered and abused but still running—became iconic symbols of go-anywhere, do-anything 4X4ing. 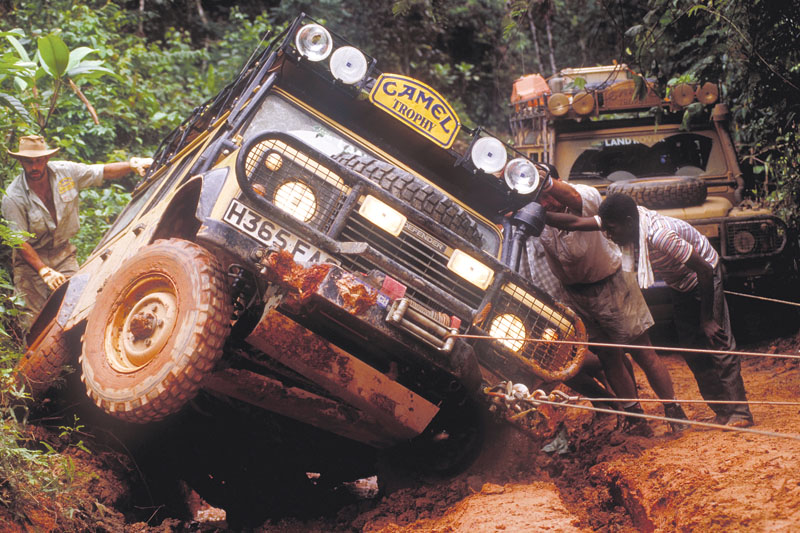 As part of the Camel Trophy Defender Series, Land Rovers have conquered some of the most demanding terrain on earth, like the jungles of Borneo. 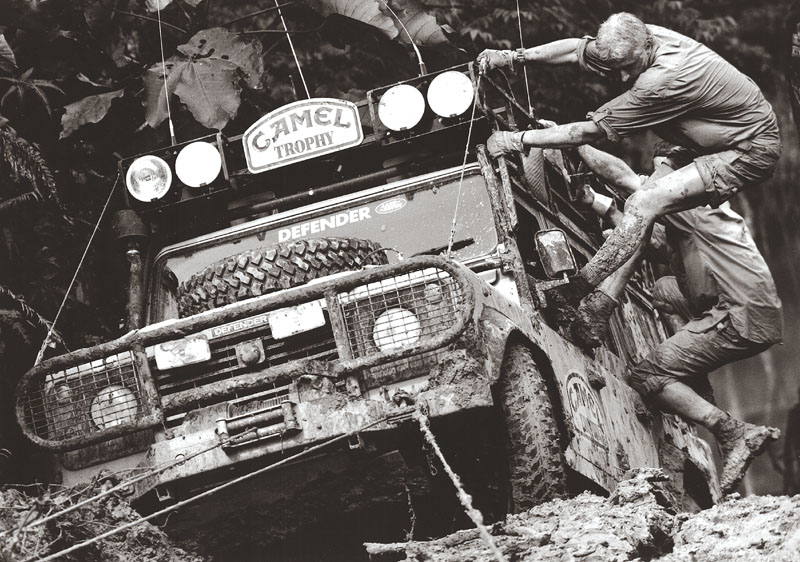 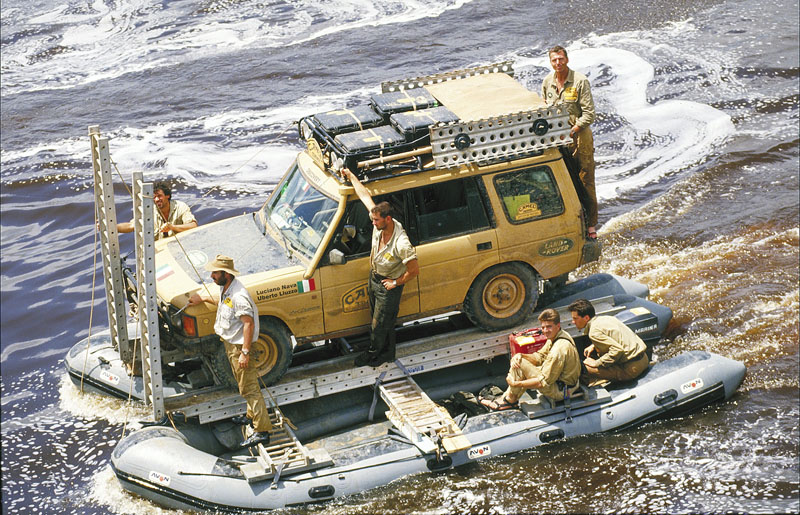 Roof racks were an essential addition to Camel LRs because they frequently had to carry their own roads…and bridges! 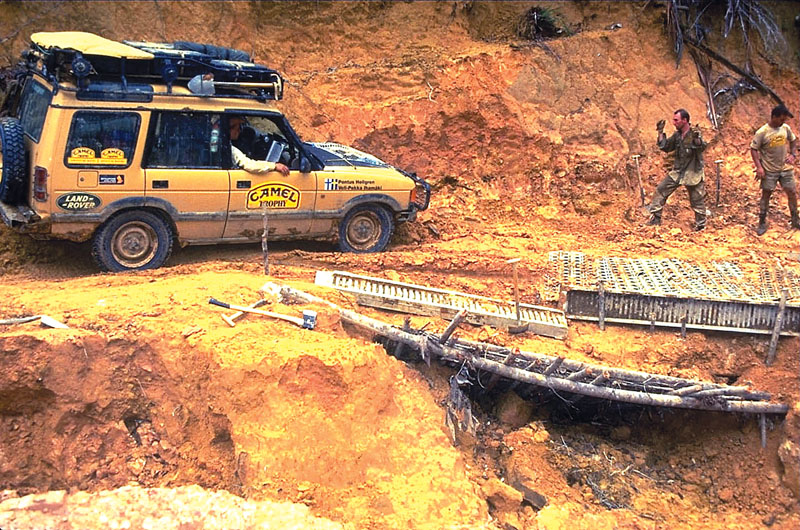 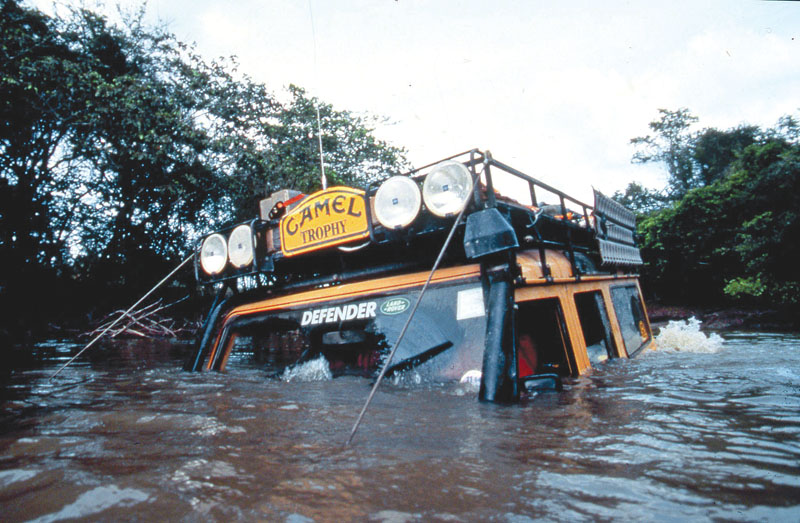 As long as the rear-view mirror stays dry, a Land Rover is good to go! 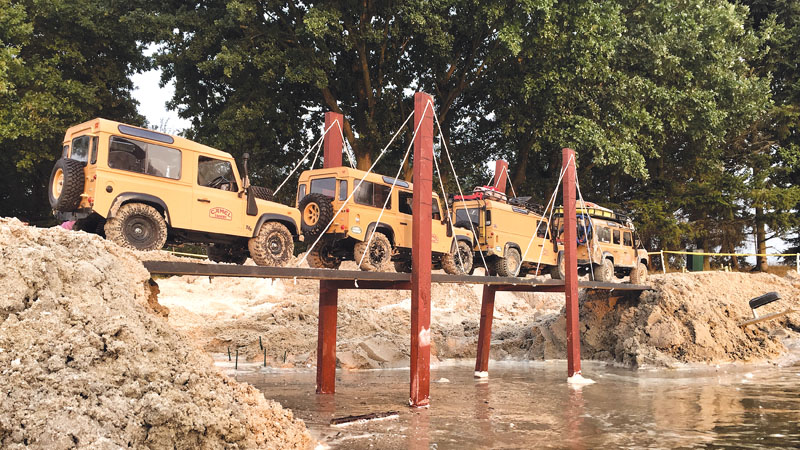 A team atmosphere defined the event. Everyone was determined to see all competitors finish together. 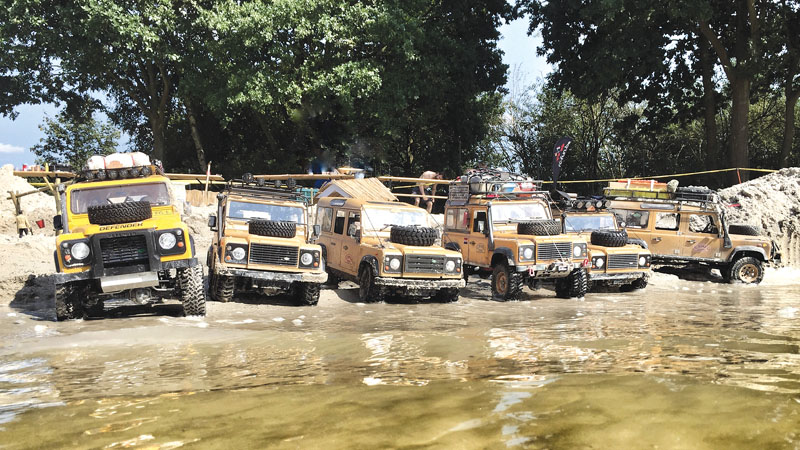 Team Benelux’s motto is “More Scale Is More Fun.” As you can see, they are having serious amounts of fun! 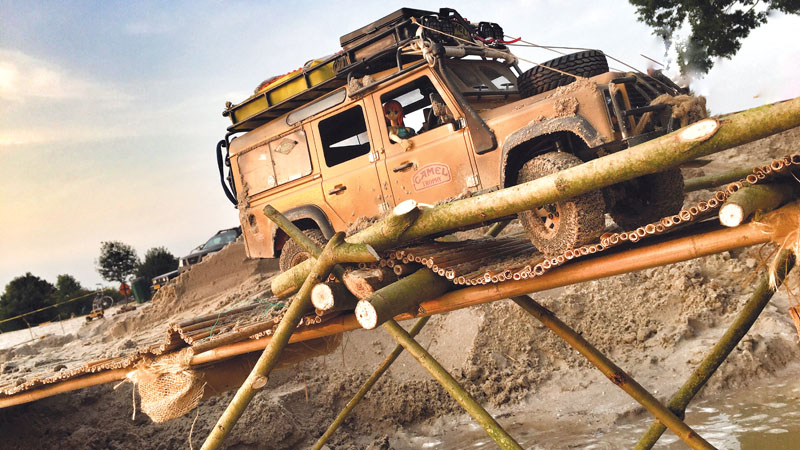 Attention to scale detail didn’t end with the trucks. Check out the effort that went into that bridge!