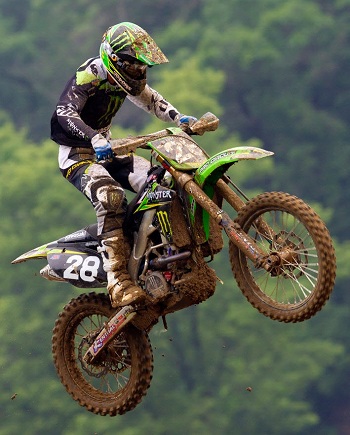 Pro Circuit/Kawasaki/Traxxas’s Tyla Rattray fought back in the second moto to earn his third overall win this season with a 2-1 finish at Spring Creek MX in Millville, Minn. Rattray held off his teammate Dean Wilson, who took second overall with a 1-2 for his sixth podium finish this season, while Blake Baggett came from behind in both motos to finish the day third overall with a 3-3 moto result. The podium sweep was the fourth time in seven rounds from the Pro Circuit/Kawasaki/Traxxas riders. Puttting together another strong performance was Broc Tickle with a 6-9 for sixth overall.

Grabbing the team’s seventh consecutive overall victory this season, Rattray worked through the high heat and humidity to score more points than teammate Baggett to move back into second place in the point standings. In both motos, Rattray got out to a good start, which helped put him in position for his third overall win in 2011. “It’s great to breakthrough and get another win,” said Rattray. “The conditions today were really tough and I know my training during the week helped me push at the end in both motos. I was so close to getting Wilson in the first moto, but he held on and I was able to get the win in the second moto. We’ve been working really hard and it feels good to be back on top.”

Maintaining his points lead for the third consecutive race, Wilson was able to start the day off right with a Moto 1 victory. While the heat took it out ofhim during the first 30 minutes plus two laps, Wilson was still able to go into the second moto with a fire for the podium, finishing in the runner-up spot for the sixth time this season. “The heat really got to me in the first moto and I wasn’t sure how I was going to be in the second moto,” said Wilson. “I just gave it all I could and made sure I didn’t do anything that would cost me any points. I knew that if I finished second in Moto 2, I wouldn’t lose any points to my teammates. I am trying to stay smart and not doing anything that would hurt me in the long run.”

Baggett came into Round 6 not 100 percent after dislocating his collarbone while practicing during the week. He worked hard to be as prepared as possible and still showed that he was able to push through the pack. After finishing third in the first moto, Baggett came around on the first lap in 21st in Moto 2. He went to work in true Baggett fashion and made his way to third for third overall. “I didn’t want to lose out that many points, but it could have been worse,” said Baggett. “My shoulder was definitely sore and it was really hard to focus with the weather like it was. I know that this championship will come down to the last race and I couldn’t give up. I’ll go back home, rest up, and hopefully come out strong in Washougal.”

Tickle once again was able to move through the pack on his Pro Circuit-backed Kawasaki KX250F. The first moto saw him work his way up from 15th on the first lap to finish sixth, while in the second moto he held off several competitors to finish ninth for sixth overall. “I think I could have had a better result, but I rode a little tight in the second moto,” said Tickle. “I was able to hold some guys off, but I never really got into a groove. My goal is to get on the podium and I think that I can get up there before the season is over.” The Pro Circuit/Kawasaki/Traxxas team will head to Washougal, Wash. for the eighth of twelve rounds of the AMA Motocross Championships series. After seven rounds, Wilson remains in the lead with 305 points, while Rattray moved back into second with 289 points over Baggett’s 284 points in third. Tickle’s good ride kept him in sixth with 170 points.