I’m beyond spoiled to have a comfortable indoor track within a 30-minute drive from my house, and the local RC community is lucky to not only have a place to race, but an owner who listens to his customers and genuinely cares about making the most of his business. In order to make the track more consistent and cut down on track maintenance time, SDRC recently installed an overhead sprinkler system that evenly blankets the sticky clay surface with moisture in just minutes. At last week’s club race, however, those sprinklers also served as a metaphor for my on-track struggles as electrical gremlins ruined my chances at a win – they were raining on my parade! 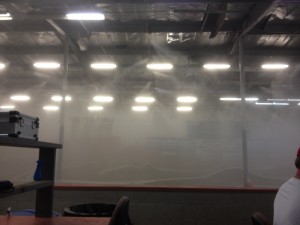 The overhead sprinklers are great for the track, but this hazy and dark photo is how I felt after my car rolled to a stop.

If you’ve read my last few blogs you’ve likely laughed at the comical misfortune I’ve had while racing stock buggy against people with way more practice in the last couple of years than I do, and how I’ve tried beating them with experience and grit rather than…well, practice. Everything was going swimmingly last week until Lady Luck smote me again with another backhand slap of indiscriminate vengeance.

At the Top Gun Shootout earlier this month (read all about it here) I had a peculiar problem with my car during one of the qualifying races – it just shut off. After weeks of racing with no issues of any kind I was halfway through the final qualifying heat (on an A-Main run, by the way) and my car rolled to a stop. No throttle, no steering, nothing. It started responding just a few seconds later, and then quit again. I couldn’t see anything wrong when I got back to the pits so I checked all of my connections, went through the binding process on my radio again, re-calibrated the ESC, and took it for a test run. I didn’t have any problems the rest of the weekend, nor any since, so I wrote it off as a fluke. I headed off to go racing again without a second thought.

The first round was pretty typical of my performances lately – fast laps interrupted by a mixture of silly bobbles and catastrophic crashes. The stars aligned for round two and I rocketed to a TQ run with my best drive yet. Things were looking up!

It was just two laps into the main event that my car started acting funny, and it shut off a few corners later. I retrieved it from the turn marshal and walk back to the pits, where the car kicked back to life again. Oh well, I guess it’s time for some more trouble-shooting.

What’s the most frustrating mid-race problem you’ve ever had?