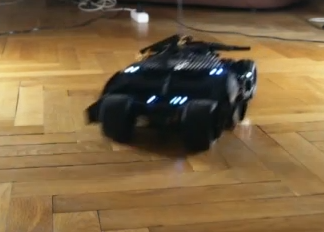 Some of us love Batman, some of us love Legos…..and some of us love making a Batmobile out of Legos, well at least Paul from Poland does.  Check out this cool rig he put together from using mostly Legos.  It is indeed one of the sweetest homemade radio controlled vehicles I’ve ever seen.  Check out the video below, as well as the story from Top Gear.

This is the best R/C Batmobile ever

Meet Paul. He’s a 29-year old Polish man, and ever since 2005, his life has been tied up in one thing. Building a Lego Batmobile.

Well, he’s probably done other things too, like eat, and sleep, but for young Paul, Christopher Nolan’s ‘Tumbler’ – first seen in 2005’s Batman Begins – sparked off something in his brain. He had to build his own Batmobile. Out of Lego.

And thus, after much deliberation and hard work, he has built what we think is possibly one of the best Lego Batmobiles out there. It’s radio-controlled, and features independent front suspension (which Paul said took up 95 per cent of the build time because of its complexity), plus a live rear axle. Paul’s clearly unconcerned about his Tumbler’s ride and the pesky nuances of mid-corner bumps.

That said, the rear-axle is powered by two radio controlled-motors coupled through an adder, that transfer power to the rear diff through a ball joint. There’s even a moving Lego LED hooked up to the rear that functions as the ‘jet’ engine, and it’s got spring-mounted Lego cannons!

He spent a month on the bodywork and, while he admits it isn’t perfect, we’ll say that overall, this Tumbler is ruddy astonishing. Have a watch of Paul’s Tumbler in action in the video below. We suspect you may want to begin sending in your Christmas Lego Tumbler gift requests into Paul via carrier pigeon almost immediately…

Of course, if this isn’t nearly big, wide or thunderously loud enough for your Batmobile needs, have a click at the link below. We’ve had a shotgun ride in theactual Batmobile from The Dark Knight Rises. Did we mention it was loud?