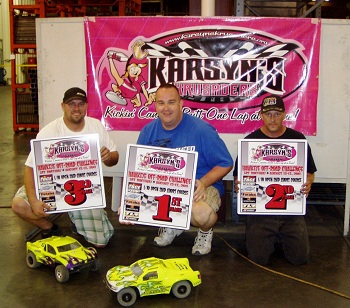 The 1st Annual Hawkeye Off-Road Challenge for Karsyn’s Krusaders was held on Saturday, August 13th at LRT Raceway in Evansdale, Iowa. 43 entries converged on the 135’ x 100’ outdoor off-road track for the event. While there were awards and bragging rights up for grabs, the main goal for the event was to raise money for the local charity, Karsyn’s Krusaders. Karsyn’s Krusaders is a non-profit group that raises money through merchandise sales and other events to help families affected by childhood cancer and other life threatening illnesses. In a little over 2 years, the group has raised over $55,000 for groups like Make-A-Wish and others. To learn more about this great cause please visit www.karsynskrusaders.org

Through the raffle held at the race, Karsyn’s Krusaders t-shirt sales and a couple generous donations from community members, we raised $810 for the great cause. Big thanks go out to all of our racers and especially the companies that donated a bunch of prizes for raffle: Hobbico, Horizon Hobby, BCE Speed, Jconcepts and Pro-Line Racing. We couldn’t have done it without their generosity!

On to the racing, the track was in great shape and held together very well. It was ran dry throughout the day and developed a nice wide black groove. The dry conditions sent most drivers on the search for the perfect tire combination between traction and tire wear.

Pro Buggy qualifying was intense with a different TQ in all 3 rounds! In the end, Nick Lyle’s Mugen earned the TQ via tie breaker over the Kyosho of Danny Bartholomew. The start was clean with everyone on staying in line, Lyle clipped the corner at the end of the straightaway on lap 2, Bartholomew was able to miss him but every other car piled up with the overturned car in turn 1. Shane Rasmussen came out of it the best jumping up to 2nd but leaving Bartholomew with a huge lead. As the first round of pit stops occurred and a couple bobbles by Bartholomew allowed Rasmussen to close in a little with Taylor Timmerman and the rest in tow. Around the 11 minute mark, disaster struck for Bartholomew as a broken drive shaft would sideline his Kyosho. The last 9 minutes would be a battle between Rasmussen, Timmerman and the hard charging Nick Lyle trying to come back from his early mistake. In the end, Nick Lyle kept his tires on the ground and took home the big comeback win, followed by Taylor Timmerman and Shane Rasmussen.

Pro Truggy was a two truck battle all day with the Losi’s of Danny Bartholomew and Taylor Timmerman going head to head in qualifying. With Bartholomew taking the TQ in rounds 1 and 3 for the overall TQ, but Timmerman only tenths of a second behind, the 20 min main would be a great show. Timmerman was able to capitalize on a couple early mistakes by Bartholomew but Bartholomew never let Timmerman get more than a couple seconds ahead. Timmerman ducked in the pits at the 7 min mark on an obvious 2 stop strategy. Bartholomew pushed on and stretched his first tank to 10:30, Timmerman again would be in the lead with Bartholomew in hot pursuit trying to get as close as possible knowing Timmerman had to make one more stop. As it shook out, Bartholomew regained the lead and made it to the finish line 5 seconds ahead of Timmerman who charged hard at the end but couldn’t quite make up the extra pit stop.

Sportsman Buggy saw Rick Christensen come out of a 2 year retirement and drive great all day taking the TQ and Winning the main. Sportsman Truggy saw much of the same from Aaron Martin smooth and consistent all day. 1/8 Electric Buggy was dominated by Tony Bacon’s MP9E taking the TQ and Win. 4wd Short Course was one of the most competitive classes of the day with TQ Curt Bacon making a last lap pass on Aaron Martin for the win 2wd Short Course saw some blistering laps out of Bubba Boggs SC10 and he was able to keep it out front of the challenge of Chad Holst’s Blitz for the win.