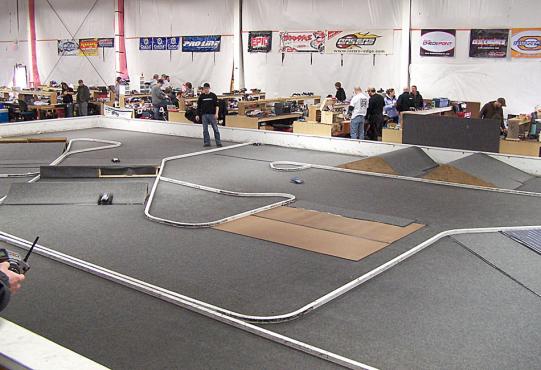 I ventured to R/C Madness in Enfield, CT to attend this year’s Indoor Off-road Mini Nationals. I attended last year, but it was only to show off the new Traxxas 1/16-scale Revo and Slash. They weren’t yet available to race at the time of the event so I was really looking forward to racing them this year. However, it wasn’t going to be on the same track. R/C Madness moved across town into a larger facility. This allowed for a larger track layout and room for multiple tracks under the same roof. I was quite impressed with the amount of space the new building offered. They were still getting situated from the move, but all was in place for the Mini Nats.

In addition to being for small-scale RC vehicles only, this “off-road” race is also unique because of its racing surface: carpet. This is actually quite common in many indoor R/C shops around the country, especially in the northern states. It’s basically an on-road carpet track with jumps and bumps specifically designed and built to work seamlessly with the carpet track. Ozite carpet provides smooth, consistent high-bite surface for rubber and foam tires. Tire softening agents are also used and applied to the tires to tune the amount of traction available from the tire. If traction needed to be taken away, then CA is applied to the outer edges of the tires to stiffen sidewall flex and detune traction. It’s a very cool experience to race on an off-road style with carpet surface.

Giovanni Petruzziello gets his wrench on between Novice heats.

This was a fun class to watch, as young drivers challenged each other on the carpet course. I remember racing at their age. Sam Jenkins was the man of the weekend. He was all over it on both days took the win on Sunday. Zack Theroux and Giovanni Petruzziello battled it out the entire weekend and had one heck of a race in the main, finishing only 1/500 of a second apart—Zack just barely edged him out at the end. I pitted next to Giovanni all weekend, and I’ve got to say he’s a great kid. All the novice drivers learned a lot this weekend.

Here’s my Slash and E-Revo race trucks. You can see the new TQ 2.4GHz radio in the shot too; it automatically recalls the settings for each truck when I power up.

This was not only the first time to race the 1/16 Slash for me, but it was the first time I’ve run rubber tires on carpet. The Slash is so fast and the traction is extremely high, so it was tricky finding an ideal setup. The traction on the track would vary throughout the day as the temperature changed. Tuning the tires with CA was crucial for fast consistent laps without traction rolling. Jed Cone was very fast and consistent all weekend, and layed down the best qualifying time on Saturday just a second ahead of me. We had some good battles during the weekend, but the last one in the A-main would be the heartbreaker for Jed. Shortly after I had taken over the lead with only minute or so left on the race, I cased one of the doubles and it left me upside down between the jumps. This allowed Jed to take back the lead and then some. There wasn’t going to be enough time left in the race for me to catch up, but just as Jed was landing the last jump, a wire disconnected from the speed control shutting down all power to the motor. This allowed me back around for the win. What a tough break for Jed. I want to compliment him on the great job he did driving his Slash all weekend. Jamie Lepley also did a great job sealing third place and rounding out the podium.

The glossy areas are coated with CA, which takes away traction. This was a popular tuning trick at the Mini Nats.

With nearly 30 entries, the Mini Monster Open class was one of the largest classes at the Off-Road Mini Nationals. This class was fast and was also spec’d to run on rubber tires. I found a great setup that worked well with the stock 1/16 E-Revo tires with traction compound. In the last round of qualifying, I had a great battle with Zach Barry. We were both on TQ pace and only a half-second apart. I made a couple mistakes in the last couple of laps and had to settle for the second qualifying position. The main was little tougher. I chose not to ‘sauce’ my tires and I paid for it with understeer. It wasn’t until the last few laps of the race that the traction came up in the tires and I could push the truck hard on the corners. I had a great battle with John Cravotta for the second spot toward the end with Jacob Pratt right behind me. It was an intense finish with Zach Barry taking the win by about 7 seconds. John Cravotta took the second position and I grabbed the third spot. I’d also like to give props to Tony the “Flyin’ Hawaiin” and Ronny Spinelli for placing their 1/16 E-Revos into the highly contested Mini Monster A-main. Great job!

Master of Madness Chris Marcy put on an excellent event, as usual. I’ll be back next year!

I’d like to thank everyone involved in putting on the 2010 Indoor Off-Road Mini Nationals. Chris Marcy and crew put on a great event as they always do. Everyone had a great time and there was plenty of great racing on track. If you’re looking for something different to do with your 1/16-scale Traxxas vehicle, check out your local shop and see if they have racing classes for them. It’s a blast!