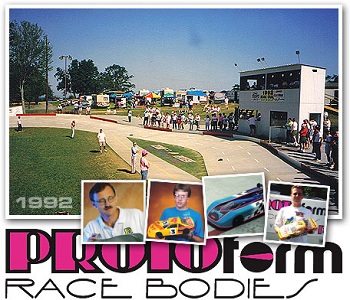 PROTOform is celebrating 20 years of RC car race body development. To help commemorate this milestone Master Mold Maker Dale Epp shares his story on how he began working for PROTOform below:

It was early in 1991 that a casual phone conversation with (then stranger) Mike Ogle, the art director at RC Car Model magazine sent my life into an all new direction. I had already begun reading RC Car Action avidly as I was trying to figure out just how to get involved in the exciting world of rc cars.

Mike explained that he was an rc drag racer and he really needed a better “funny car” body to race with. Upon hearing this I immediately started fashioning a new pattern in hopes of meeting his needs. A month later I red labeled him a couple PROTOform Dodge Stealth funny car bodies and within 3 days he had used one of them to set a new world record as well as score a victory at the “IEDA WORLDS” in Colton CA. Needless to say this was very encouraging. NASCAR type racing was a large part of the rc on-road scene back then so I knew I needed to try my hand in that venue, a place where aerodynamics played a huge factor. A few months later (a very young) Mike Boylan used our first ever PROTOform oval body to lap the Domingues Hills velodrome at over 77 MPH (average) to become the fastest NASCAR bodied rc oval racer ever.

At this point in time I made the decision that I was “all in” on a new career change. As a lifelong car racing enthusiast, I’d already spent years hot rodding and customizing full size cars for myself and friends, so it seemed like a natural “fit” for me. I’d just need to learn how to do things in a smaller scale. So I frantically prepared eight more body styles in preparation for PROTOform’s official company debut. Yes, it seems like yesterday, but twenty years ago, in Nov of 1991, my wife and I nervously set up a homemade trade show display at the (then) huge RCCTA show in Chicago in hopes that there was some niche I could fill in this new and exciting world of rc car racing.

Well, the next couple years could be summed up in one word: tumultuous. Long and tedious “coffee fueled” days and slim profits made me wonder at times if PROTOform would survive long term. Our NASCAR style bodies were really making a mark in the USA based oval racing scene, but then in 1994 an interesting and crucial thing happened. RC racing legend and mega champion Masami Hirosaka used an off-the-hobbyshop-wall PROTOform racebody to win the IFMAR On-Road WORLDS in Germany. American Jon Orr put a second one on the podium to boot! That day, PROTOform’s horizon’s expanded immensely.

The next year saw an exciting new chapter in PROTOform’s developement as we merged with the fine folks at Pro-Line Racing in southern California. Working with Todd Mattson, Tim Clark and the entire Pro-Line team has been an exciting and rewarding time to say the least. The rc racing world has seen the benefits of this move as well. PROTOform race bodies have now been used by the winners at 15 different IFMAR On-Road WORLDS Championships, as well as being used at every conceivable national and regional title winner around the globe including those of EFRA, ROAR, FAMAR, FEMCA, and the BRCA . It’s been gratifying to personally witness the PROTOform brand become the body of choice by competitors at the Reedy Race of Champions, the International Indoor Championships in Las Vegas, the Snowbirds Nationals in Orlando, and the US Indoor Champs in Cleveland. In the amazing European Touring Car Series, PROTOform race bodies have been on every podium.

Without a doubt, the best part of this 20 year journey has been the privilege of meeting so many great people! To the many team racers I’ve met and worked with, and have consistently made me look better than I actually am (with their amazing skills on the track and in the pits) – THANKS! To the dealers, distributors and race organizers – you’ve also added something to my life that is priceless. It’s so nice to be able to call so many of you “friend”.

At this time I’d like to say a huge “THANK YOU” to all the racers and enthusiasts out there that have used our racebodies over the last two decades.

I recognise that without your support, none of this would be possible. I’d also like to express my heartfelt gratitude to my wife Katie, to Pro-Line Racing, to our team drivers, and all our dealers, for the contributions you made toward PROTOform’s success over these last 20 years.

I’d also like to wish everyone a very MERRY CHRISTMAS and a blessed NEW YEAR! 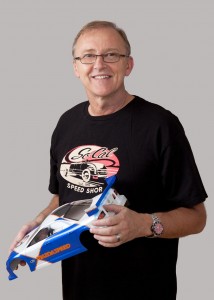 If you like this article, check out this additional article on PROTOform.