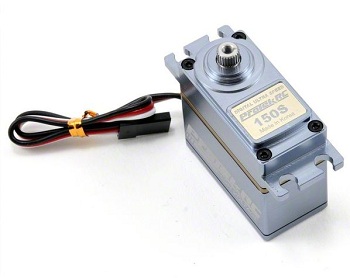 These new servos feature metal gears, dual ball bearings, and even include aluminum servo horns. Check out the official press release below for more info:

A Main Hobbies announces the all-new ProTek R/C line of digital, high-voltage servos. Whether you’re on a budget or you need a servo for the highest level of competition, ProTek R/C’s servos have you covered. The servo’s metal-gear construction and dual ball bearings are built to handle all of the abuse you can dish out. No wimpy plastic servo horns here, the entire line of servos also includes aluminum servo horns. The 200 and 300 series heli and plane servos come with “clamping style” aluminum horns for easily adjusting sub trim.

“I had the opportunity to do testing with the new ProTek servos over the 2012 season.” said Chad Bradley, A Main Hobbies Team Driver. “I used the servos in my buggy and truggy with no failures whatsoever. The speed and torque of the PTK-150T was more than enough power for the demands 1/8-scale racing.”

“ With my aggressive flying style I knew I’d push the servos to the limits. Not only did they hold up, but I was impressed by how well they performed. The servo horn’s unique sub trim spacer are a nice touch, as they make setting your sub trim very easy.” Tim Jones A Main Hobbies Heli Pilot.

ProTek R/C offers three distinct lines of servos – the 100, 200 and 300 series give RC car, heli and plane enthusiasts servos that will exceed their demands. Tenth-scale RC car racers will have several options in the 100 series servos, while heli pilots can choose from several cyclic 200 series servos. Plane pilots will want to take a serious look at the PTK-330T and PTK-350T servos, which both offer incredible torque and excellent transit speeds.

If you like this article, check out this additional article on ProTek.