Tamiya is known worldwide for its wild RC rides. Some are designed with track-worthiness in mind, and some are just flights of fancy, the result of too much caffeine and maybe not enough sleep. The Konghead and its brother The King Yellow may be the latter. With 6-wheel drive, optional 4-wheel steering, and monster truck tires, Tamiya’s 6-wheelers are designed to romp in the dirt with the best of them. But what happens when you take a 6X6 offload beast and leave it overnight in a room with a historic Formula 1 car? This vehicle you see on the pages in front of you. I wanted to see if Tamiya’s off-road monster toy could be transformed into a lean, mean, asphalt-eating machine, so I put some parts together and created this monster track truck.

Body Rock
Since the truck has six wheels, the first vehicle I thought of was Tyrrell Racing’s 1976–78 P34 Formula 1 car. The Tamiya version of this iconic race car was first introduced in 1977. I was able to find the exact paint for this project by looking through the Tamiya Tyrrell P34 manual online. I was also able to source the original decal sheets as well. But paint and decals alone aren’t going to transform a truck to an F1 racer. Off to my 3D printer I went and fabbed up a rear wing, front wing, and air intake fashioned after three different iterations of the race car. The wing is from 1977, the front is from its 1976 debut, and the intake and paint scheme is from the 1977–78 race season. As an added touch, I laid down the exhaust stacks for a more streamlined appearance. 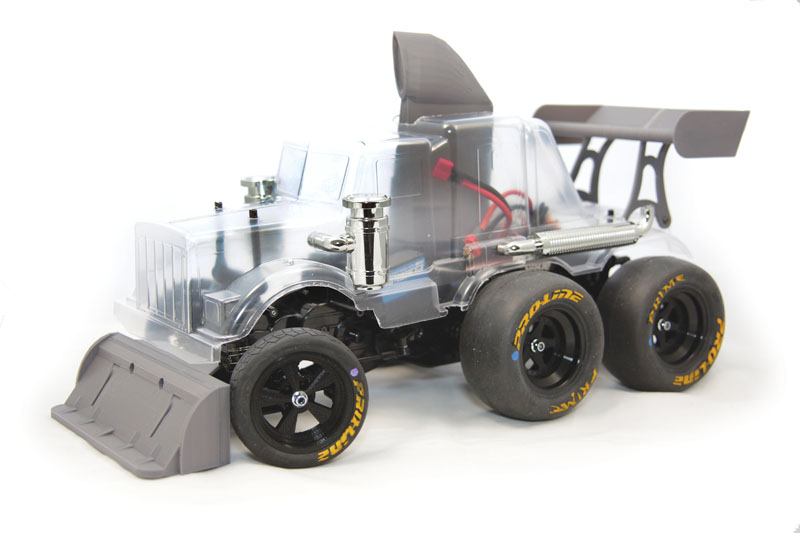 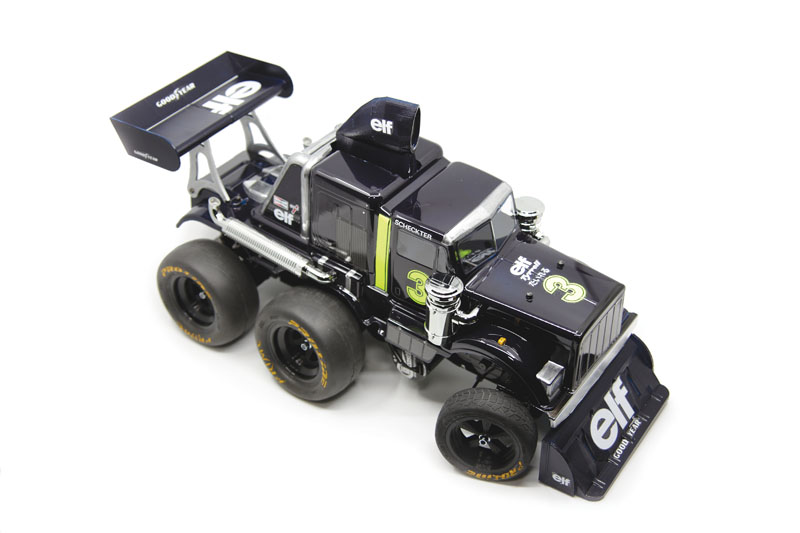 Road Rubber
This first thing I needed to do after assembling the chassis was to replace the off-road rubber with something a little more street-able. I decided on Pro-Line 2.2 Prime stadium truck slicks for the four rear wheels and Inversions for the front skinnies. The combo created just the right stance to give the Konghead a mean road look. The four rear wheels are from Kyosho’s Scorpion 1/10 2WD buggy. I felt the black five-spoke design lends itself well to the look. To complete the rolling stock, I enlisted my trusty 3D printer once again and designed some five-spoke Cragar-style wheels for the front end. The original P34 race car has four small tires in front and two big ones in back; maybe this is the way it should have been done instead! 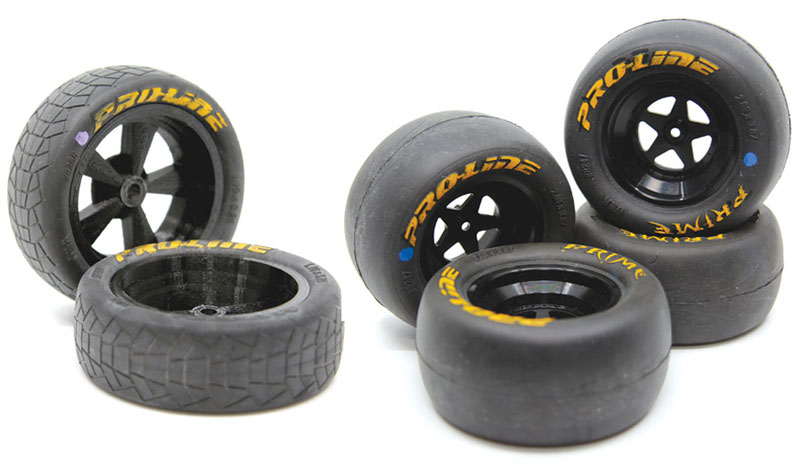 The front wheels are 3D-printed, and the
rears are Kyosho parts. Pro-Line tires are fitted all around.

Powerplant and Electronics
I wanted way more power than the stock 540 silver can could provide for this build. You can’t have a race car with the engine of a Yugo, so I went to Castle Creations to fill the motor space with some real brushless power. I didn’t want to burn up the all-plastic-gear transmission right away, so I went with the milder Mamba X SCT Pro system with the 3800Kv motor. I may swap in a hotter motor at a later date if the transmission holds up, but in the meantime, this setup is wicked fun. The battery slot on the G6-01 chassis is just the right size for some 7.4V 2S LiPo power, so to fill that slot, I dropped in a MaxAmps 150C 6500mAh Dual-Core LiPo battery. The steering servo is the ProTek 100T because I wanted something with torque that wasn’t going to cost more than the truck itself! 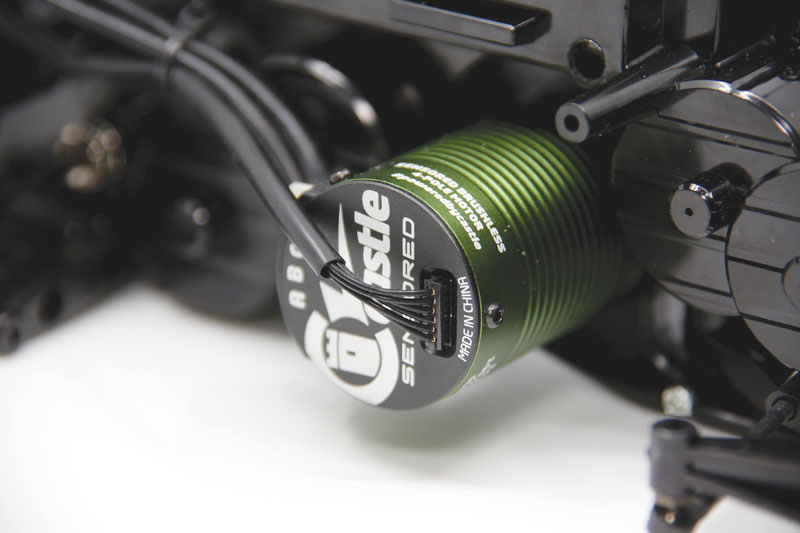 The Castle 3800Kv motor proved to be more than adequate to power this truck, but there may be room for more power. 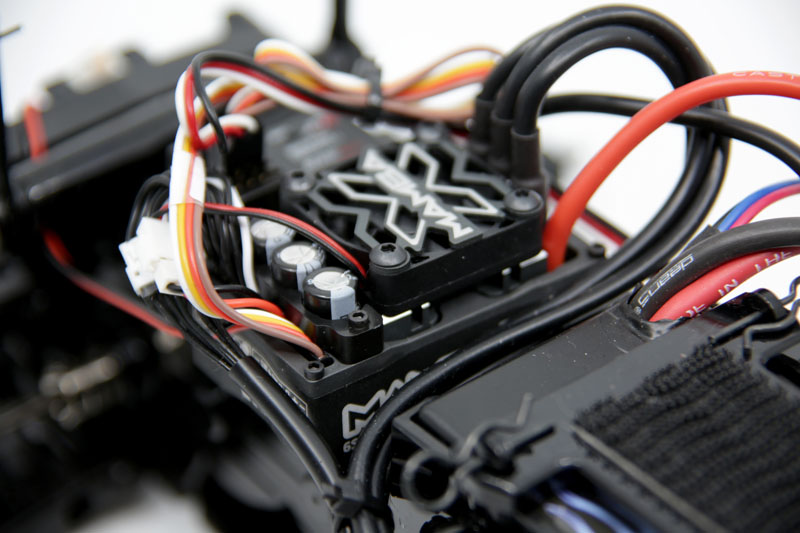 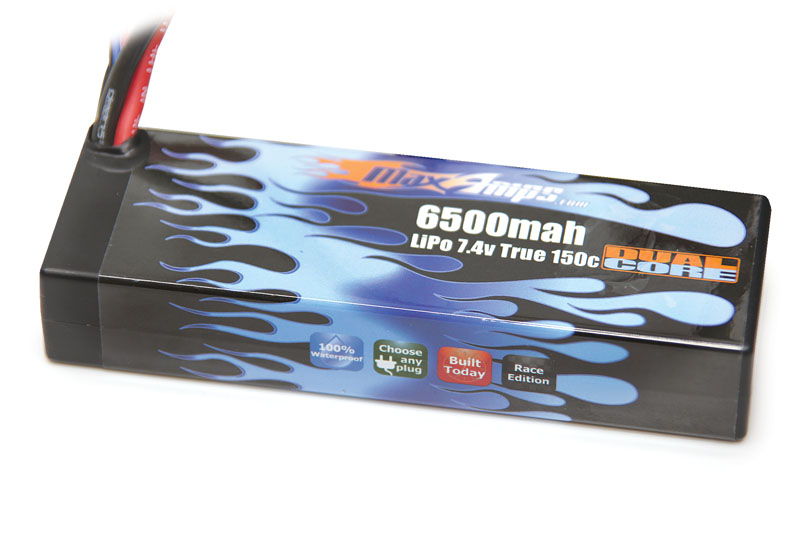 The MaxAmps 6500mAh pack keeps the
Konghead rolling for a long time before recharges.

Cha Cha Chassis
The six-wheeled G6-01 transmission is a stretched 6WD version of Tamiya’s earlier WR-01 chassis, introduced in 1999 and used all the way up through 2007 on various 4X4 vehicles. I replaced the nylon and brass bushings with a set of roller bearings from Fast Eddy Bearings, and made sure the gears were meshed properly (the internal gears are nonadjustable). I spritzed the gears with a nice dose of white lithium grease and sealed everything up nice and tight. 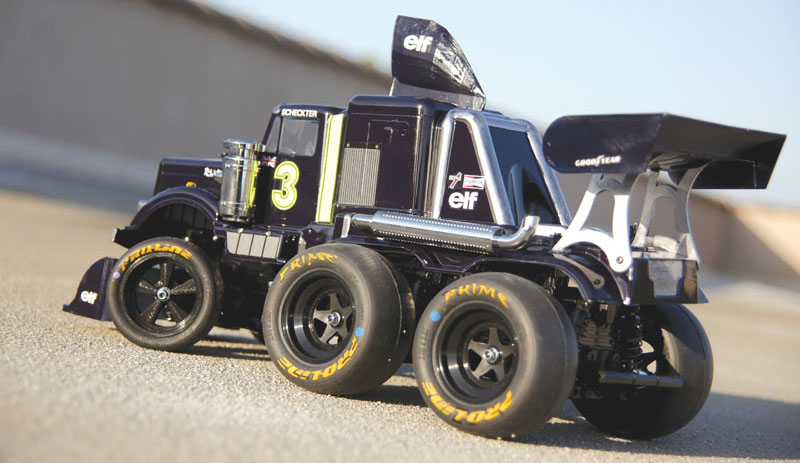 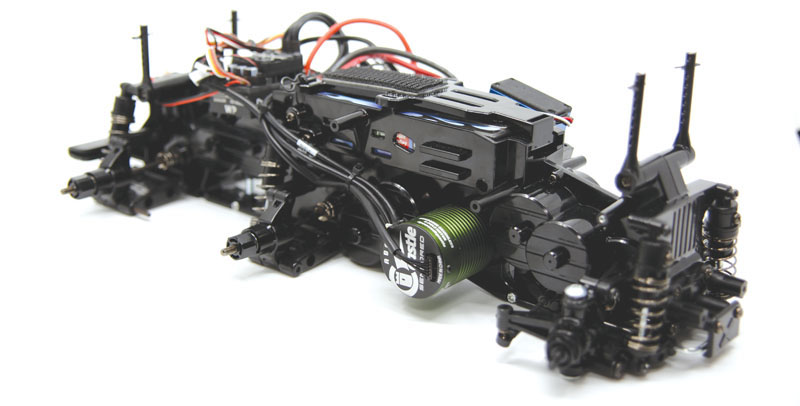 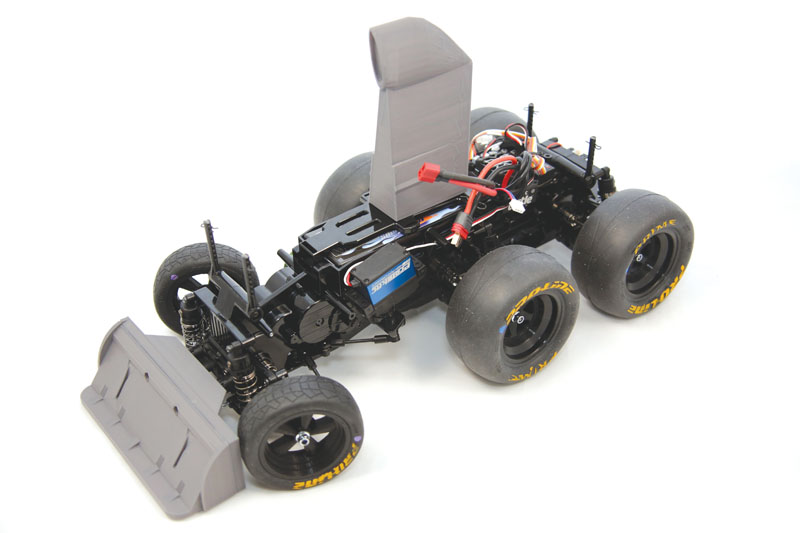 The Konghead’s chassis is a stretched version of the earlier WR-01 4X4 chassis. Two clamshell halves are wrapped around more gears than a clock, but when greased up, it is smooth and quiet.

Performance
I took the Konghead track truck out for some shakedown laps on a freshly paved parking lot. I wanted to do the testing on smooth asphalt so that I didn’t run the risk of damaging the 3D-printed parts. 3D printing is great for making prototypes of parts you want to use, but injection-molded ABS is a better option for durability. I charged up the MaxAmps battery and popped it in. To be honest, I didn’t expect much considering the original intent of this vehicle and the relatively minor upgrades that were done, but I was pleasantly surprised. The gearbox is uncannily smooth and quiet; it sounded more like a Tesla than a truck. I may have to add an ESS-One sound box to this project to get it to make some noise. The truck was quick in the parking lot and had minimal body roll, considering there are no swaybars installed and it still had the stock friction shocks. I tacked on my GPS unit with some dual-lock Velcro to get some numbers, and I got a surprising 28mph max speed in the open parking lot. I still have a little wiggle room for gearing options, and swapping in a hotter powerplant is an easy change. The battery tray is limited to 2S LiPo if I want to keep the stock battery hold-down, but if I want to remove it, the MaxAmps 3S 6500 would fit perfectly, although I’m still tentative about running too much power through the all-plastic gear train. The combination of the 3800Kv motor and the 6500mAh battery gave me more than 30 minutes of hard run time. I could have run longer, but I was trying to baby the gears and not heat them up too much. 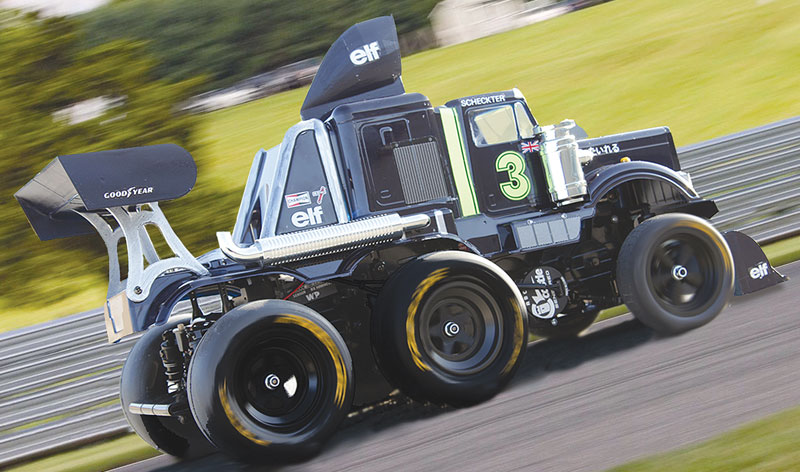 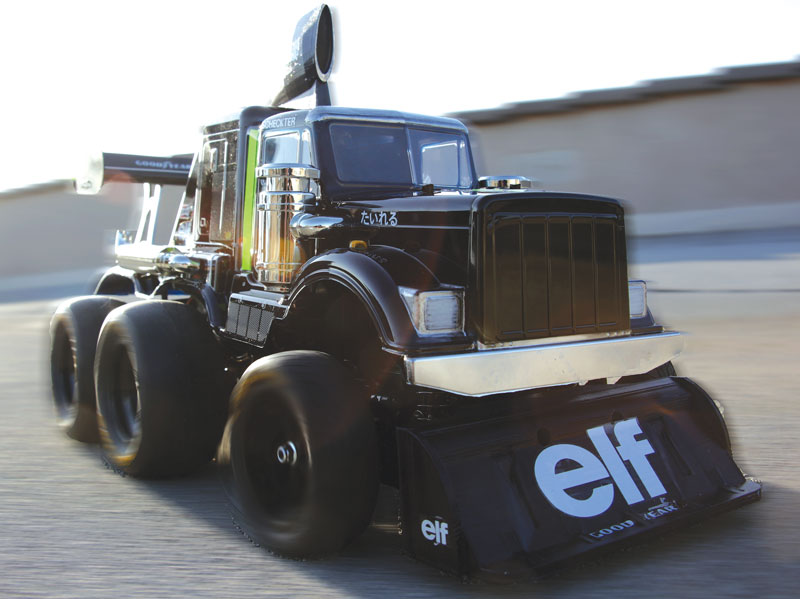 Final Word
I’m really happy with how this project turned out. I was just hoping to have more power to go along with the fantasy F1 looks, but the amount of performance that I was able to muster up from the motor/battery combo was a pleasant surprise. Adding some oil-filled shocks and maybe some aluminum goodies will be the icing on the cake. Some may say that it more closely resembles a steam train than an F1 racer. I say that it’s maybe 33 percent truck, 33 percent freight train, 33 percent F1 race car—and
100 percent awesome! 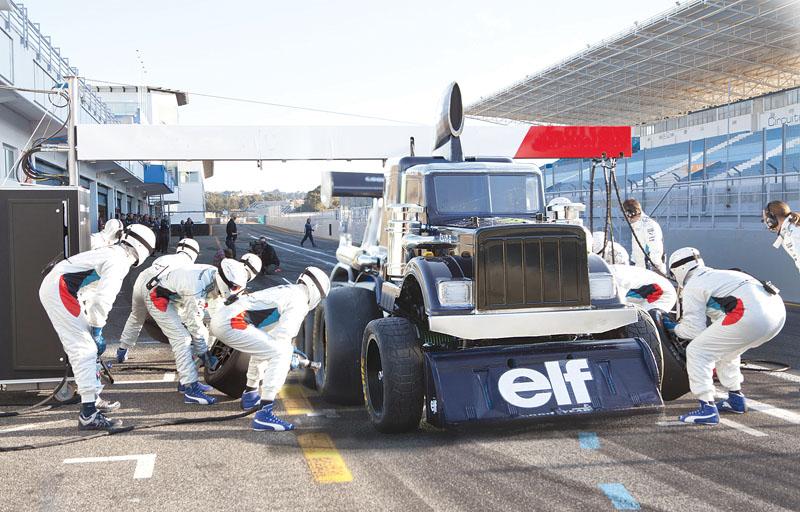