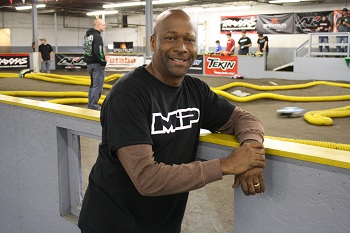 At the recent Short Course Showdown tour stop at S & N’s Trackside I got a chance to sit down and talk to Mr. MIP himself, Eustace Moore Jr.  MIP has been offering RC products for over 30 years now, and before Eustace formed the company in the late 1970’s he was an accomplished professional off-road racer competing at our industry’s highest level.  This combined experience in both racing and manufacturing has given him a wealth of RC knowledge over the years, and he shares some of this with us now in this edition of Pro Talk:

Radio Control Car Action:  How did you first get involved with RC cars?

Eustace Moore Jr: Well actually I started with RC airplanes. I used to design and build my own airplanes as a kid, and there were a couple of guys in the neighborhood who were hardcore into airplanes, so I picked that up.  At the same time, while viewing the RC magazines, you’d notice they had cars there also.  I had an interest in cars as I used to build model cars, very early on I constructed some from found items like eraser wheels with bread twist wire axles, and pretty soon my model cars became RC cars, and that was the end of it.

RCCA:  At what point in your RC career did you decide to start up your own company?  Or was that always a goal of yours?

EMJ:  Well initially it wasn’t a goal.  I’d say the first plan started when I was about 16, when I was initially designing some parts for myself, which initially became products, and it just kind of went forth from there.

RCCA:  What is your official job title and day to day duties over at MIP?

EMJ:  Currently I am CEO Genius and my duties are vast.  I work with every department of the company from sales and marketing, to product development, I work with the factory race team, the manufacturing group, quality, engineering, shipping, receiving, packaging….I am involved in every aspect of the company, so I would just say that I am involved.

RCCA:  The company name MIP stands for Moore’s Ideal Products, but before you settled on that name were there other names you considered?  Maybe there is a funny/interesting story that went along with choosing this name?

EMJ:  There is no story.  It was actually Moore’s Ideal Products and Hobbies – initially there a small Hobby Shop I had started with, it didn’t quite open, it was more just gathering all the information, and at some point I had just decided to drop the hobby part and just focus on the manufacturing…no story.  The Ideal came from the ideas sparked from where the products came from – participating in racing, and just talking with the racers and finding out what they need and also from what my needs were at the time, you know, for RC racing.

RCCA:  Over the years RC has transformed into the hobby that we all enjoy today.  In your opinion what are some of best changes you have seen in the industry?  Are there some bad ones?

EMJ:  Well the best ones are going to be the lipo batteries, the chargers, and the motors that go along with them.  You are able to run extremely long periods of time with tremendous amounts of power as well as create power.  The guys are running 100 mph now with these little cars…it just really made a big difference in what we are doing. The 2.4 radio systems have made it possible to run endless amounts of trains, planes, and cars radios so that has definitely been a stride forward. Backwards?  I’d say that when nearly everybody decided to go to China and have things made there, and the products and cars became just commodities, rather than the custom, specialized vehicles for RC racing and for the true enthusiast.

RCCA:  Lately you and factory driver Matt Olson have been attending a ton of nationally recognized races like the Short Course Showdown to compete in short course truck classes.  Do you feel it is important to see this class grow and why?  What about short course buggies?

EMJ:  When I decided to get back into racing, I actually ran the short course buggy class in the series and won it. The buggies are really nice.  I don’t know if they are going to catch on.  They are just not quite as fast or as aggressive because they do not have the aerodynamic package that the trucks and smaller buggies do, so they are just a bit different from that aspect. You can’t really put a modified motor in there and get those things to hook up and really go – that’s what really appeals to people.  It would be nice to see the class grow as a beginner or stock class, so we will see where it goes.  I think it is important for all the classes to grow. Whatever people are enjoying, that’s the direction we will go. As a company we focus on many areas, so whether it is one class or another, we are still going to contribute our products, our designs and concepts in that direction. We decided as part of our marketing plan that it is really important that people take us serious in the arena we are in, which is performance RC car parts.  So really, the only way to get people’s attention is to go out and win, and we’ve definitely done that.  We have been very successful nationally with the short course truck events we have gone to – fastest laps, top qualifiers, and actually winning 20 plus events, so just dominating completely. And right now it seems as though, generally, no one can touch what we are doing – and that goes to represent that what we are doing is pretty badass.  Period.

RCCA:  At the recent 2013 Pro-Line Cactus Classic many manufacturers opted to run a mid-motor setup, and traditionally US drivers run a rear motor configuration.  Do you see trend continuing at more races and why?

EMJ:  I do see the trend continuing.  I think it is just an evolution in the car design and concept, but there is quite a bit of development to go along with that in order for it to work on loose surfaces along with high bite surfaces. We have some projects that are going to send us down that road, so as a company, we definitely think the trend is going to grow.  As for what anyone else is going to do, good luck.

To read the full interview, please visit our Member’s Only website.

Not already a member?  Then head over to AirAgeStore.com and sign up today!